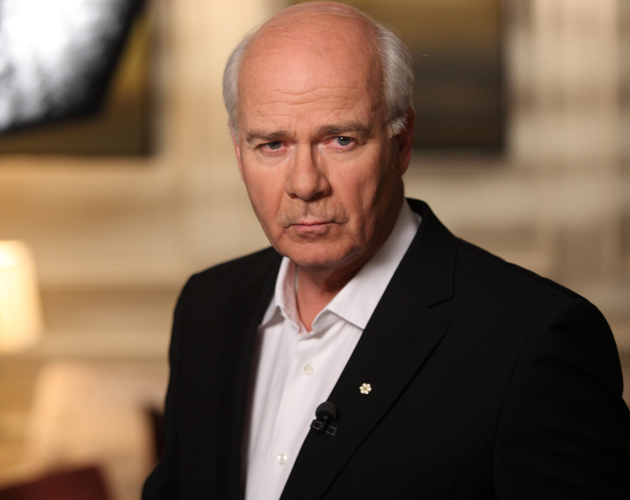 Veteran television journalist Peter Mansbridge talks to Kim Izzo about his book One on One, based on interviews from his hit half-hour show

Kim Izzo: You’re 61. What made you write One on One at this point in life?

Peter Mansbridge: Random House approached me and said, “You’ve done this show for 10 years. You’ve interviewed a lot of people. Why don’t you tell us about the most interesting ones and give us a little behind-the-scenes description of what these things were like and why you wanted to interview these people?” And so, it was a different approach and it still gave me a chance to tell a little bit of my story and it was fun.

KI: Of all the interviews you’ve done, how did you choose the ones that appear in the book?

PM: I wanted a cross-section. I didn’t want just politicians. I wanted to show that I enjoyed talking to a lot of people. I’ve interviewed so many people over my career, somewhere between 10,000 and 15,000 people — for this particular program, about 250 people — and a lot of them are world figures or certainly national figures. And so it wasn’t hard. The hard part was narrowing it down
from that group.

KI: It’s the 10th anniversary of One on One. Are we going to see any changes?

PM:  One on One is pretty straightforward. It’s me and someone talking for half an hour. The sets may change, we may get a different chair or something, lighting background change, but the concept’s still the same.

KI: What about The National?

PM: The National is constantly changing. We’re always trying to adapt,
whether it’s new technology or new techniques. So that happens all
the time.

We’re going through what we call
a renewal this fall. It’s still the same basic journalism, but there are different ways to present it and there are constantly new challenges on what’s available with technology.

Starting in mid-October, there will be a digital National earlier in the evening. It’ll be just headlines and it won’t be me sitting at a desk. It’ll be much more casual. But you’ll be able to call it up on your iPhone or your BlackBerry and, bang, it’ll be there. We’ve got a great brand name and we’re trying to move it around to the different platforms that are available to us.

KI: Your subjects are from all walks of life. Were there any life lessons you learned from them?

PM: If there’s been a guiding light for me on these interviews, it’s that most of these people are leaders in their own right. Whether they’re in the arts or politics or business, you name it. And leaders don’t have to be presidents
or prime ministers. They can be in any different kind of role.

I’m fascinated by the way people make decisions. I’ve often found that the most interesting people aren’t the best-known people. They’re ordinary people who’ve somehow been caught in an extraordinary circumstance. Those people you learn the most from because there’s no spin, there’s no pretension.

KI: How has aging changed your approach to your career and your life?

PM: I’m calmer. I still get excited when a fire engine passes — you know, I want to chase it — but I can pace myself on
a story, as in life, in a better way than
I did even 20 years ago.

In our exclusive excerpt from one on one, the anchorman  and author recalls INTERVIEWING president barack obama

People often ask me if I get nervous before a big interview. Often they claim I don’t look nervous, but I know appearances can be deceiving. The truth is that I usually feel butterflies before every appearance. And I’m glad I do, for one simple reason: it helps get my energy up.

So I was surprised that morning in
February 2009 when I woke up in a Washington hotel room feeling ex-
tremely calm, even though I knew that in a few hours I would be sitting in the White House interviewing Barack Obama. It was to be the CBC’s first one-on-one interview with a sitting U.S. president that anyone could remember. I got up, did a few sit-ups and stretching exercises and showered. Then I pick-
ed up my razor and shaved, always a dangerous proposition when you’re pumped and about to go before the cameras, but no blood-dripping cuts ensued. I put on a clean, nicely pressed white shirt and decided on a blue tie, knowing the odds were he’d be wearing red. Reached into the closet for my suit pants and slipped into them. Put on my shoes and gave them a quick polish. Read the Washington Post and the Wall Street Journal, ate some fresh fruit and washed it down with some decaf coffee. Put on my suit jacket and headed for the door. I was so relaxed that I said to myself, “President of the United States? White House? What’s the big deal?”

So imagine my surprise when I got off the elevator, walked across the hotel lobby and caught my reflection in a mirror — my suit jacket and pants were two very different colours. I’d put on the wrong pants. As I raced back up
to my room, I was almost relieved because this little
embarrassment proved, of course, that the interview was
a big deal, and an appropriate amount of nervous energy can be a constructive thing.

It’s a short three- block walk from the Willard Hotel, where I was staying, to the White House, and I’ve made it many times over the years, usually just to record a stand-up in front of the most famous residence in America. I’d been inside the White House only once before, during the Reagan years, as part of one of those media scrums let in for a few staged comments and then quickly ushered out. This was a lot different. For almost a quarter of an hour I would be effectively “alone” with the President of the United States.

I was escorted through White House security at the main gate on Pennsylvania Avenue, ushered along the driveway where the correspondents do their nightly “hits” for U.S. network newscasts, and then through a service entrance and down a red-carpeted hallway toward the first-floor room where the interview would take place. “The President will be here at 9:13. Please be ready,” said one of his communications people as I arrived shortly after eight o’clock. “Sure,” I thought, “9:13. I bet no one is that precise.”

At 9:13 Barack Hussein Obama bounded along the hallway, turned the corner into our room, hand outstretched, and said loudly and warmly, “Good morning, Peter. It’s great to have you here.” I wanted to think, “Hey, he actually knows me!” but common sense prevailed. I assumed that the last thing whispered into his ear before entering the room was, “Hey, the guy’s name is Peter.”

So there we were, the former Transair baggage handler and the most powerful man in the world, small-talking the seconds away before the conversation was to begin. The set- up in what’s called the Map Room (for its storage of historic U.S. military maps) had been monitored and approved every step of the way by the Secret Service and the President’s communications staff. But just as we were about to start, his press secretary, Robert Gibbs, declared, “Wait, the lighting isn’t right.” Everything was delayed one or two minutes as the lighting was adjusted.

I looked across at the person who one assumes is busier than anyone else you’ll ever meet and said, “Sorry about this, Mr. President.” He smiled and almost with resignation responded, “Don’t worry about it. This happens all the time. It’s the ‘shine’ police at it again.” It was a light moment, a reference to the gaggle of image people who follow him around trying to ensure that every time he’s caught on camera, nothing looks bad. They should have relaxed. Our main camera that day was operated by Doug Husby, one of the CBC’s best. He’s someone who, over the years, has captured some of the most famous people in the world on camera, and no one has ever complained about how they looked. Neither, as it turned out, would Barack Obama.

The President’s people had made it clear that the interview was to last 10 minutes, not a second longer. And while you can’t see them when you watch the One on One conversation, among the dozen or so people hugging the walls off-camera were a few of his staffers literally counting down the seconds. I went into the interview with half a dozen issues I wanted to raise but knowing I’d be lucky to get to three or four. Ten minutes go by very quickly, and you have to know where to start, when to move on and what to drop. This is not a perfect science, but you make decisions, usually on the fly, and hope for the best.

My first decision was not to allow the opening minutes to be chewed up on softer stuff but to get right to the substantive issues: trade, the economy, energy and Afghanistan. Before I knew it, producers Leslie Stojsic and Samira Hussain (the two people who had worked hardest on getting the interview) were relaying the “one minute left” signal. I could sense the President’s staff pacing. Outside over the White House lawn, his helicopter, Marine One, was circling, waiting to pick him up for a shuttle to Air Force One and a flight to Denver. The chopper was circling because the press people had told it to stay aloft to prevent the noise of its landing from disrupting the interview.

My next move would determine how long that helicopter kept hovering. With about 50 seconds remaining, I said, “I’ve only got a minute left,” made a quick crack about his famous BlackBerry addiction by saying that he carried a bit of Canada on his belt and then asked, “What’s your sense of Canada?” In doing so, I’d punted the last time cue to him, and control of the interview’s length was now in his hands. It was up to Barack Obama if this baby was going to end on time. He gave a great answer. Counting a brief final exchange and the thank-yous, it went more than two minutes, putting the interview well past the 10-minute barrier dictated by his staff. Hey, not my fault.

As soon as the interview was over, he was generous with his handshakes, and then he disappeared out the door with Secret Service agents at his side and his entourage rushing off after him. It was helicopter time or so I thought. As Samira, Leslie and I were doing a quick post-mortem, there was a commotion at the door, and guess who barged back in? The President, with a big smile and a hearty, “Peter, you gotta meet this guy. He’s from Victoria!” The guy was Marvin Nicholson, Barack Obama’s national trip director, a giant of a fellow who clearly is also part of that group of friends who play basketball with the nation’s number 1 basketball fan.

“He’s a pal of Steve Nash,” said the President, talking about the great Canadian-born NBA player, “but he’s got no game!” “No-game” Nicholson moved toward me, hand outstretched, saying, “Wow, Peter Mansbridge — my mother loves you.” Never thought I’d hear that one while standing next to the President of the United States. And then finally, to the relief of his travelling entourage, he was off toward the helicopter, laughing all the way.

Excerpted from Peter Mansbridge One on One: Favourite Conversations and the Stories Behind Them. Copyright © 2009
Peter Mansbridge. Published by Random House Canada. Repro-duced by arrangement with the Publisher. All rights reserved.