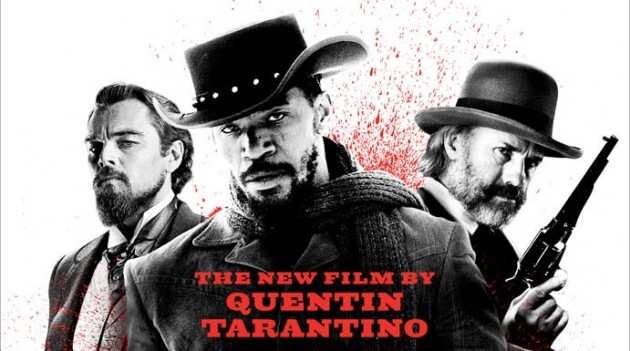 Choice Quote: “This is my world, and I’m getting dirty.” – Django

What’s it about? Set “somewhere in Texas” in 1858, doctor-turned-bounty hunter King Shultz (Waltz) frees Django (Foxx), a slave who happens to know where to find three brothers with bounties on their heads. Shultz and Django team up, racking up bounties across the American South until the time comes for Django to track down his most important catch: his wife, Broomhilda (Washington), who’s enslaved by plantation owner Calvin Candie (DiCaprio).

Is it any good? Django Unchained is a vengeance and blood-fuelled odyssey across the pre-Civil War Deep South. Tarantino mixes his muses like a thick stew, incorporating elements of classic spaghetti westerns – the theme song, credits, comedy interwoven between gun battles and a cameo by Franco Nero, star of Sergio Corbucci’s 1966 flick Django – with a hero who walks around to a mix of rap, soul and blues music and who’d have been right at home in one of the director’s previous hits, Jackie Brown. The film is also funnier than you might expect, as Tarantino again manages to blend these multiple elements into a fun film with larger than life characters, clever dialogue and lots of gunfire. And don’t forget the director’s knack for resurrecting careers. One could make the case that, until this film, Foxx hasn’t shone nearly as bright since he won his Oscar for 2004’s Ray. And you have to wonder about Don Johnson – he’s not in the film for long, but will his brief but memorable role as a slimy plantation owner be the jolt the near-flat lining pulse of his career needs?

Foxx shines as Django, a hardened slave-turned-bounty hunter who does most of his talking with cold stares and hot bullets. Christoph Waltz, meanwhile, fills in the silence with a charismatic wit that almost steals the film – no surprise to anyone who witnessed his Oscar-winning turn in Tarantino’s Inglourious Basterds.

The action gets serious when Django and Dr. Shultz wind up at Candyland, the plantation owned by the ruthless Calvin Candie. Candie treats Django’s wife little better than the bloody and broken bare-knuckled fighters he purchases, uses up and discards. DiCaprio nails this despicable creep in both his arrogance and viciousness, and you’ll love him for how much he makes you despise Candie.

Kerry Washington takes a second turn at playing Foxx’s wife (the first was in the Oscar-nominated film Ray). Here, she plays Broomhilda, seen mostly in flashbacks being hunted and tortured mercilessly, and though her dialogue isn’t plentiful, the horror she evokes through her cries and expressions prove some of the most powerful scenes in the film. Counter that with Samuel L. Jackson – a Tarantino film favourite – who, as Steven, Candie’s right hand man, easily tops the list as the vilest character he’s played to date.

At one point in the movie, Dr. Shultz explains to Django the German legend of Broomhilda, his wife’s namesake. He talks of the hero sent to save her, braving hellfire and brimstone to slay her beastly captor and bring her home. That tale, in many ways, sums up this film. Most of Django’s journey is captivating, though some of it proves unnecessary (a scene where Johnson leads a bumbling Ku Klux Klan attack – complete with a pointless cameo by Jonah Hill – is more fit for a Monty Python sketch than a Tarantino film). If you’ve come for a history lesson, you’ll leave unfulfilled. If you’ve got an aversion to films featuring graphic violence and the excessive use of racial slurs, this is not the film for you.

Django Unchained is the Tarantino film you expect, with a few cowboy hats and spurs for added effect. As Django declares, it’s his world, and he’s getting dirty. Depending on how you feel about the director, you’ve either been warned or intrigued.

Can I bring my kinds and grandkids to see it? You’ll probably want a holiday film with more seasonal cheer and less gratuitous use of the n-word.

Overall Popcorn Rating: 4 kernels (out of 5)