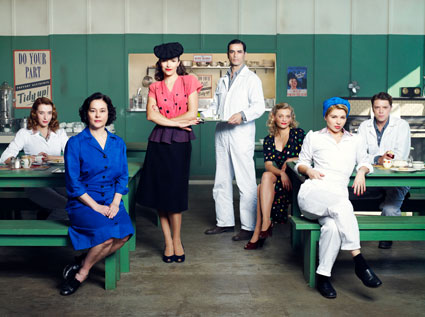 When you think about it, there’s really no explaining Meg Tilly’s career. The Canadian actress began acting in her early 20s and by age 25 had earned an Oscar nomination for her starring turn in Norman Jewison’s Agnes of God. She appeared in a number of films alongside Hollywood heavyweights Jack Nicholson, Glenn Close and Jeff Goldblum among others.

Then, in the late 1980s, with her star on the rise, she walked away from it all, choosing to raise her three kids (one of whom she had with The King’s Speech star Colin Firth) far away from Tinseltown. For more than two decades, she stayed out of the limelight, playing the part of dutiful mom while writing books for young adults on the side. Now, with the kids all grown up and thanks to some encouragement from her sister, actress Jennifer Tilly, she’s decided to get back into the acting game. And, wouldn’t you know it, at age 52, her first major project back – the Global Television show Bomb Girls, about a group of Canadian women working in a munitions factory during the Second World War – is a hit. It’s almost as if she never left.

“I know. It’s crazy. I don’t know. I just got lucky,” was Tilly’s response, followed by her infectious laugh, when, after noting the chronology above, I asked her “Who’s ever done that?”

We met on a drab December afternoon late last year in the living room of Lorna Corbett, Tilly’s Bomb Girls character. Costumed in an ankle-length blue dress, she settled in on a couch wrapped in plastic (as the grandchild of Italian immigrants, this made me feel right at home) and discussed her career resurgence, Bomb Girls, memorable co-stars, and coming to terms with the abuse she suffered in her youth.

MIKE CRISOLAGO: You’ve come back to acting and now Bomb Girls, which started as a six-part mini-series, is filming its second full season.

MC: What’s great about Bomb Girls is not just that it’s Canadian, but that it shows a side of the war beyond the usual explosions and fighting that you often get in Hollywood fare.

MT: I think it’s always about the men, as far as I know. I think women were fighting the war on the home front for sure. Lorna definitely is. (Hers) is a family that has been absolutely shaped by war and this time of history. It shaped our country because, especially in that time, you didn’t talk about the after effects of what this kind of combat does, or for women being on their own and making their own decisions and earning a pay cheque and how that changes how you walk in your own shoes.

MC: Now that you’re enjoying this success, do you ever think back and wish that moment when you decided to return came a little sooner?

MT: It couldn’t have because my youngest (child) had to get through school. Then I needed, I think it was a year and a half, (because) I’d hit 50, my youngest had left home, and it was like I’d been picked up by a tornado and dropped down 26 years later. I think I needed that period of solitude and a little bit of loneliness – kind of feeling like, now what?

MC: When you think back to the first half of your acting career and all the talented actors and filmmakers, who stands out in your mind?

MT: Jack Nicholson – you know, you think, ‘Oh, he’s such a big star,’ and he is. But he loves the work, the process. So when you do a scene with Jack, it was like dancing with the consummate dancer and you just knew that no matter what happened, whatever sparked, you would both run with it. There’s such freedom to just breathe. That was a huge gift, doing those scenes with him (in The Two Jakes). Obviously working with Colin on Valmont. Milos Forman (on Valmont) – a beautiful director. Doing Agnes of God with Norman Jewison – he created such an atmosphere around the set and around Agnes. Norman’s very much about everybody creating together.

MC: During your break from acting, you published young adult novels dealing with the subject of sexual abuse, which you experienced when you were young. Does your upcoming book, A Taste of Heaven (February 2013), follow in a similar vein or did you take a different approach?

MT: No, actually I decided I wanted to try a shift and write a cosy book. There’s nary a pedophile in sight [Laughs]. Nobody gets beaten up. It’s about best friends and I just wanted it to feel like home.

I feel like I’ve said what I wanted to when I talked about my life and both sides. I spent years talking about the happy things of my childhood but not giving balance and my concern was, as I got into my mid-40s, is that when we present our very best picture-perfect self, it can sometimes make it a challenge for the rest of the world that says, ‘Well, what’s wrong with my screwed-up life?’ So I think a lot of the world wanders around – at least I did for the first half of my life – thinking that it was a shameful secret, things that happened, or that somehow I was defective because I didn’t have that Leave It to Beaver life, and I think that the majority of people don’t. I spent a lot of my life feeling that if people knew the truth about me, they wouldn’t want to be my friend … You know, with every age, there’s going to be things that are blessings and things that are challenges that sometimes turn into blessings because it makes you who you are.

MC: You went public with your support for Colin Firth during the award season leading up to his Oscar win for The King’s Speech. Have you received similar support from him now that you’ve gone back to acting?

MT: He’s been really sweet. You know, there were a couple of times where I was like, ‘What do I do now?’ where I did call him, and he’s been lovely and wonderful. When I did Who’s Afraid of Virginia Woolf? [in 2011], I hadn’t ever done theatre before and there were a couple of things that I needed to ask him about that as well. Both Colin and Jennifer, my sister, were enormously helpful in the beginning because I’ve been away for years. I didn’t know how to do that, with the theatre stuff especially. But usually when (Tilly and Firth) talk, we talk about the kids more.

MC: Are your children planning on getting into acting?

MT: My son [Will] is studying acting – he’s a lovely, lovely actor. The thing is, he doesn’t have a glamorized version about it. He’s 22 but he’s seen the downside of being famous as well. And I think for Will to have his dad [Firth] win an Oscar and have his mom nominated and his aunt Jenny nominated – and his uncle Johnny is a wonderful actor – it’s just been all around him. So I think he’s pretty realistic about it.

MC: Now that you’ve experienced such a career resurgence, what do you hope to do next?

MT: It’s funny because there’s been a couple of parts in films that have come my way but because I don’t know if Bomb Girls is going to be picked up again I don’t want to say yes to anything because I want to love every minute. And the big, most enormous event that’s happening this spring is I’m going to become a grandmother. I couldn’t be more thrilled, so I want to have lots of time to do grandmotherly (things) and help them out so they can enjoy the baby. So I’m really trying not to book up.

Season 2 of Bomb Girls premieres tonight at 8 p.m. on Global.