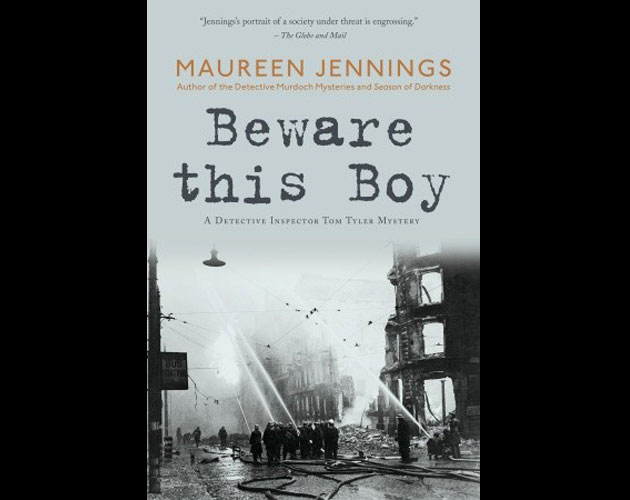 Maureen Jennings has written seven novels featuring Detective William Murdoch, which became the basis for the hugely successful TV show Murdoch Mysteries. Her recent novel, Beware This Boy, became the story concept for the new TV show Bomb Girls. Zoomer talked to the Toronto-based writer about her latest mystery, Inspiration, and the fleeting nature of history.

Athena McKenzie: In Season of Darkness, you featured the women in the Land Army during the Second World War, while the follow-up, Beware This Boy, deals with the women in the munitions factories. Was there something that drew you to these women and this time?

Maureen Jennings: Very much so. When I was growing up, I didn’t associate the Land Army girls with the war. It was just a job you did. I wanted to be a Land Army girl. It was such hard work. I had no idea what hard work it was, and it was all over by then. I’ve always been very drawn to that which was going on — which was women stepping up to the plate.I was born and brought up in England. One of the things that my mum said later was that she didn’t know how she would have managed to get through the war and the death of my father who was killed in the war, without the women on her street. It was big city, Birmingham, but we didn’t go anywhere so it was almost like a little village within. We knew everybody on the street and all their business, for good or ill. It was a tremendous feeling of women coming together to deal with unbearable difficulties. Maybe they did complain — I’m looking back a little bit with a child’s eyes — but I don’t recall that there was a lot of grousing going on. They just literally got on with it. I admire that.

AM: Beware This Boy references an organization called Mass Observation that collected people’s stories. Did this really exist?

MJ: I’m glad you mention this because talk about the unsung heroes and heroines! It was a fantastic thing that happened and it’s vanished. It was started by two young university men. They said, “Why don’t we treat our own society as if we were anthropologists in New Guinea or something and just observe?” They recorded what people were doing and what they were saying because they said, rightly so, that you could go out with a questionnaire, but people don’t always say the truth.

They’ll say what they think you want to know or what they think they should say. This was almost like candid camera. You didn’t ask them anything in particular. You just watched and listened and eavesdropped. The war office decided this would be a really good way to keep track of the morale of the people, which was extremely important to know about, especially in the factories. And then when the war was over, that was it. They vanished into obscurity. Not many people know about it and apparently there are still tons and tons of files.  It was so interesting.

AM: Can you tell me about your choice of title, Beware This Boy.

MJ: I remember as a young kid, reading A Christmas Carol and loving it. That particular passage when the spirit shows the two children to Scrooge and he says, “Beware these children, but especially beware this boy. His name is ignorance,” I remember the shock. I wanted to do a story that in a certain way deals with ignorance.

AM: This is meant to be a trilogy. Can you tell me about the next (and third) book?

MJ: I’m working on it now. I’ve gone to Ludlow, which is Shropshire, which I actually know much better than Wickford [where Season of Darkness is set]. We’ve gone there every year for many years. I decided to move Inspector Tyler around. He goes to Ludlow. It helps me to visualize what I’m writing about, whether it’s Toronto or Birmingham or wherever it is. I just know Ludlow so much better and I could put the story there very plausibly. This book takes place in a convalescent home where a lot of the RAF men who have been severely injured and disfigured are convalescing.

AM: I understand that in an indirect way, Beware This Boy lead to the television show Bomb Girls. Can you tell me about that?

MJ: It was extraordinary. I was just gathering all my research together. I hadn’t really started the book but I knew it was going to be a munitions factory. I was on the Murdoch set — which is my other series — and Debi Drennon, who’s the makeup genius of that show, asked casually what I was working on now. I said I was working on a book set in a munitions factory. There was a look that came in to her eyes that you get when obsessives come together. For almost 15 years, she had been collecting data for a project about a factory set in Scarborough. I had never heard of it. It was a huge munitions plant. Her grandmother worked there and later her mother lived in one of the houses there. She had wanted to do something on it for many years. So, we decided to get together and share our thoughts. We were excited about the idea of telling Canadian home front stories. We thought, why not see if we can get a television series out of it. There is a tremendous amount of interest about the Bomb Girls and their story. I met some fabulous women — all of them now in their nineties — who worked in the factories. It’s been wonderful.

We’re giving away five copies of BEWARE THIS BOY. Enter to win your copy here!