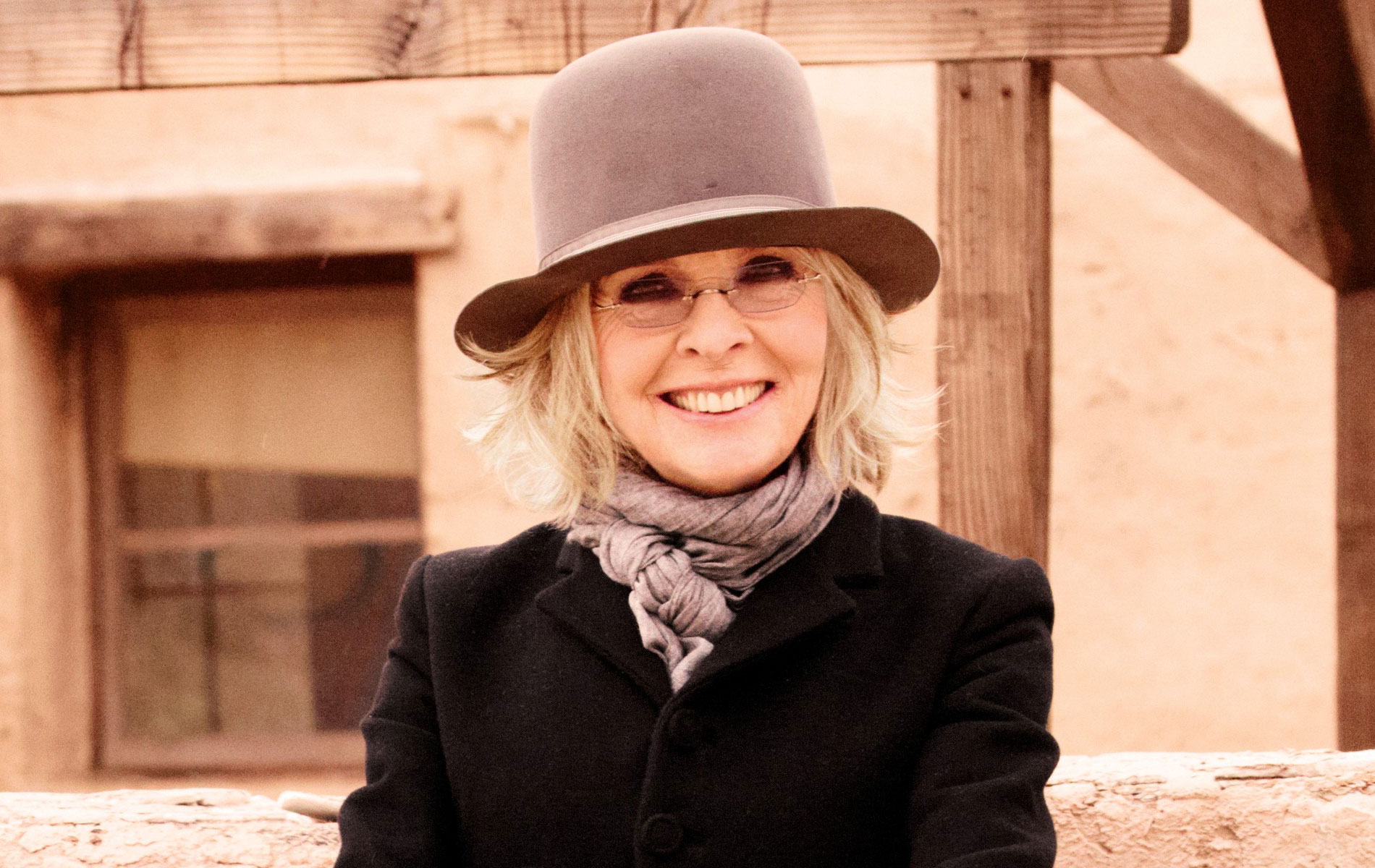 As the muse to the who’s who of new hollywood in the ’70s, Diane Keaton has her own star in the film firmament with an incandescent screen presence. now, as a leading light in roles for grown-ups, the star still shines bright.

Diane Keaton is flirting with me. Not for long and not seriously—we’re doing an interview on stage at a Toronto hotel in front of 250 people, after all. But something I say prompts her to toy with me a little.

I mention that while Keaton was doing the promotion rounds for her recent memoir, Then Again, male interviewers, including Charlie Rose and Jon Stewart, puffed themselves up like peacocks around her. “Were you aware of how they squared their shoulders, stuck out their chests, leaned in close?” I ask her, mimicking their gestures.

“I didn’t notice it from them,” Keaton replies. “I don’t understand men when they’re flirting.” She pauses for a beat, then continues with flawless comic timing, “But I notice it from you. Are you flirting with me?” The audience erupts in hoots, and Keaton milks the moment: she tucks in her chin, glances up at me through her lashes, murmurs my name. Though I know she’s kidding, my capillaries don’t—instantly, I’m blushing and, for a split second, I feel how intoxicating being flirted with by Keaton could be.

At 66, she looks her age and as gorgeous as ever. Her figure is slim, her hair streaked blond and impeccably cut, and her clothes are typically dramatic—this afternoon, during a separate one-on-one interview, she wears a Marni tunic, cigarette pants and black pumps with seven-inch spike heels; later, she’ll change into a flared leopard-print coat dress cinched at the waist with a wide belt, with matching Louboutin booties. “I like clothes that give you their shape,” she says. “I don’t have a shape, so that’s the answer to all my fashion problems.”

In the six decades since she wowed her first audience—at a grade school production of the musical Little Mary Sunshine, where she concluded her song-and-dance solo, “Mata Hari,” by sliding down a rope into the orchestra pit, earning thunderous applause (and a lifelong lust for more)—Keaton has done many things: she made her Broadway debut in the original cast of Hair, where she was the only actor who kept her clothes on.

She was a secret bulimic for five years. She bought, restored and flipped five Spanish houses in her native Los Angeles and is currently supervising the building of her first home from the ground up. She authored books on photography and design and served as a board member on the Los Angeles Conservancy, which fights to preserve indigenous architecture. She adopted her daughter, Dexter, when she was 50, and her son, Duke, five years later. She dated some of Hollywood’s most charismatic men, including Al Pacino, Warren Beatty and, most famously, Woody Allen, who made Annie Hall, the film that won her a Best Actress Oscar, and with whom she’s still close. “That guy’s a lifer for me,” she says. “He calls me up, he makes fun of me. I love it. I tell him he’s a jerk. We have a lot of fun together. And I owe it all to him, frankly. What would I be without Woody Allen?”

But what Keaton is arguably best at, professionally anyway, is falling in love on screen—sometimes ditheringly, sometimes fractiously but always swooningly and believably. What’s more, she has the rare distinction of doing it in almost every decade of her life, from her 30s in Manhattan and Reds through her 40s and 50s in Baby Boom and Something’s Gotta Give. Now, in her 60s, she’s  riding a new grey wave of cinema: thanks to hits like The Best Exotic Marigold Hotel, Hollywood is waking up to the fact that people  over 40 are the last loyal moviegoers and has begun to aim for  them. Keaton has two such films lined up: in 2013’s The Big Wedding, she pretends to be married to Robert DeNiro, and, in the recently announced And So It Goes, she’ll fall for Michael Douglas.

Keaton credits Something’s Gotta Give for netting her her current role, as the face of L’Oréal’s Age Perfect skin-care line. “The ladies enjoyed that movie because they were included in a romance, and why shouldn’t we be?” she says. (She has a habit of positing and then challenging her ideas and can carry on happily doing so for many minutes, often at breakneck speed.) “We’re still fun. We’ve got a lot left in us. I don’t want to be ignored, and L’Oréal is a great opportunity to say that.

“I particularly have this whole laboratory of lipsticks,” she continues. “Every day, you get up and there you are, oh my god. But at this point, I know what the best thing is about my face, and that’s my smile. I remember when I was in Play It Again, Sam with Susan Anspach, this beautiful, sexy actress. One day, she said to me, ‘If you keep smiling like that, you’re going to have a lot of wrinkles.’ I remember I got anxious, like I always do, and I thought, ‘Oh god, I’m not going to smile?’ Then I realized, ‘Guess what? That’s all I got.’ So I kept my smile and I have a lot of wrinkles but, hey, I’m happy. But as you get older, you have to think of many more ways to convince yourself that you’re as attractive as you wish you were. So now, I always keep lipstick in my pocket and I combine the colours. I don’t spend my whole life doing this. When I drive the kids to school, I do nothing. I’m in my pyjamas. But there is a certain point in the day when you’ve got to go out and you’ve got to feel good about yourself.” And that’s what she has to say about that.

Oh, no. Wait. There’s more. “To  me, beauty is about change,” she adds. “How are you going to experience everything if you don’t change? If you’re constantly going, ‘How can I stay still?’ then you’re stuck. It’s fun to play with your face. It’s fun to think about what you’re going to wear. But you can’t go back. Nor do I want to because what would I be going back to?”

Going forward, staying open is a big theme of Keaton’s. For much of her life, she yearned for fame and felt driven to pursue it. “I affiliated fame with heaven,” she says. “It was an abstract notion that I was extremely excited about: big rewards, all the time. But I didn’t have any concept outside that. I didn’t seem to understand that life was going to go on. I was still going to have conflicts, problems to solve.”

In her bestselling memoir, Then Again, Keaton lovingly and often devastatingly contrasts her own life as a renowned actress with her late beloved mother Dorothy Hall’s life as a meticulous homemaker, mother of four and frustrated artist. Until Alzheimer’s claimed her mind, Dorothy kept copious journals, which Keaton (who changed her surname for her mother’s maiden name early in her career) quotes at length and which were really art projects themselves, filled with collages, photos, yearnings and self-doubts. “My mother wanted to be more flamboyant and throw it out there and express herself,” Keaton says. “That’s why she gave me permission to do anything. I got away with murder all the time. My siblings couldn’t stand to go to the grocery store with me because I’d make jokes and embarrass them in front of people in the aisles. Mom encouraged the worst in me or the most exhibitionistic.”

The moment after “Mata Hari” cemented it. As her feet hit the orchestra pit, “I stood there and it was silent,” Keaton says. “Then I heard what I thought was an explosion. But it was applause. It was the biggest moment of my life. My dad [a civil engineer who died in 1990] came backstage, and he had tears in his eyes. And suddenly, I was no longer his daughter who couldn’t do anything right, who couldn’t plan ahead, who couldn’t think straight, who was horrible at math. I was suddenly catapulted into the stratosphere. That was the defining moment. I will never forget it as long as I live.”

She also remembers the first time she knew, really knew, she was famous. She’d long equated success with being on the cover of Time magazine and, after Annie Hall hit big, the magazine came calling. She was living in New York City and, one day, while walking down Lexington Avenue, she glanced at the newsstand across the street, and there was her face on the cover of Time. “I was all by myself and I remember thinking, ‘This is how I’m going to see it?’ ” Keaton says. “And that’s when I knew I was famous. Because it’s not what you expect it to be. There are fabulous things, of course. But there’s something lonely about it, too.”

These days, she’s edging away from leading roles. “I’ve seen a lot of me,” she says. “I did pretty well with that but I’m not really able to tell that story any more. That story can now be told by someone else.” She still enthuses about screen kisses—”It feels like kissing, if you want to do it, and I always wanted to do it,” she says. “It feels great! And it’s a free kiss. The men don’t have to like you, but they have to love you in the part. So they’re even better than if they were actually with you.” And she knows who she’d like to kiss on screen if she got the chance—Ryan Gosling.

More and more, though, Keaton is revelling in the pleasures of day-to-day life: strong coffee; a glass of red wine (which, incredibly, she drinks over ice); her current obsession, Werther’s Original candy. And, of course, her kids. “I didn’t know how amazing it is to be a parent,” she says. “I didn’t understand that love. Ten years ago, I hadn’t experienced as much loss. But when you experience loss, then you really understand what’s precious. So you grab onto those moments. I almost feel fierce about my kids.” She wants them to be safe, of course, and to make good choices. She also really wants them to know how to think for themselves. “That somehow, I instilled in them the right to think independently,” she says, “and to manage life. To take care of themselves. To experience all the things that are possible in one’s life. But, mainly, to use that brain of theirs. That’s what I hope for them, that and love.”

If Keaton could give advice to her younger more driven self, it would be, “Don’t be so careful,” she says. “Explore more. Grab hold of every opportunity and check it out. Don’t immediately go, ‘It’s gotta be this way.’ Also, I have a tendency to isolate myself. But you can learn more from people in a community situation than left to your own thoughts. So, be surrounded by people. If you’re more social, your life will be better as you get older. I’m having a much more intense life now. I have so much to live for and I’m a responsible person. It’s better now.”

When she adds, “I’m enjoying being alive,” it’s obvious she means it. “I’m happy I’m here,” she sums up. “I think about, that I could go. I mean, my father was 68 when he died, and I’m 66. People go, and it’s horrible. So I’m really grateful to be here, more grateful than ever. My life is enriched by knowing it’s not going to last.” Enough with the flirting—this is love.

This article was originally published in the December/January 2012 issue.