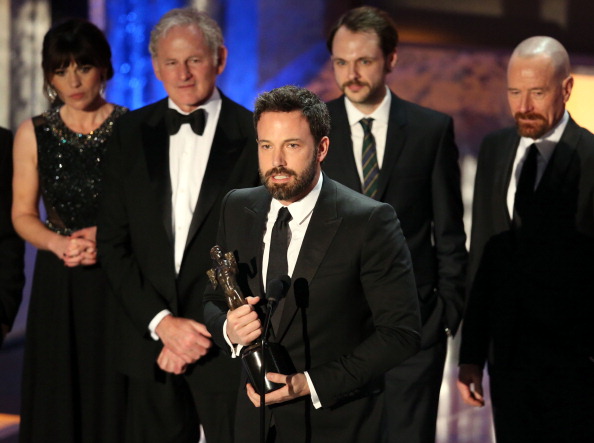 If you subscribe to the belief that the best revenge is living well, then Argo director Ben Affleck must be on top of the world after doling out yet another hunk of humble pie to the Oscar judges who snubbed him in the best director category this year.

The drama about the real-life 1980 rescue of American hostages from Iran continued its award season run this weekend by taking home a Producers Guild of America award (along with George Clooney and Grant Heslov) on Saturday and a Screen Actors Guild (SAG) trophy for best performance by a cast in a motion picture yesterday. It was, of course, only a few weeks back that Affleck took home the Golden Globe for best director, while Argo won one for best dramatic motion picture.

Flanked by his cast at the SAG ceremony, Affleck accepted the award while fuelling the film’s status as the favourite to take home the best picture Oscar at the Academy Awards on Feb. 24.

The 19th SAG awards, presented by the Screen Actors Guild‐American Federation of Television and Radio Artists, celebrate the performances of their TV and film members. To the surprise of absolutely no one, Daniel Day-Lewis, 55, picked up the best actor SAG award for his starring role in Lincoln. His co-star, 66-year-old Tommy Lee Jones, picked up the award for best supporting actor.

On the television side, Kevin Costner (58) won the award for best actor in a movie or miniseries for Hatfields & McCoys, while Julianne Moore (52) took the best actress award in the same category for her portrayal of former U.S. vice-presidential candidate Sarah Palin in Game Change. Meanwhile, 56-year-old Bryan Cranston nabbed two acting awards – one as part of the Argo cast and the other for an actor in the drama series for Breaking Bad.

Alec Baldwin, 54, capped off his run on the hit comedy 30 Rock (the final episode airs this Thursday) with a SAG award for best actor in a comedy series. The Brit hit Downton Abbey won for best cast in a drama, while legendary comedic actor Dick Van Dyke, at 87 years of age, received a Lifetime Achievement Award.

“I’ve knocked around in this business for 70 years and I still haven’t quite figured out exactly what it is I do,” Van Dyke quipped on stage. “Aren’t we lucky to have found a line of work that doesn’t require growing up?”