Spotlight: Your Weekly Roundup of Zoomer Arts and Culture News 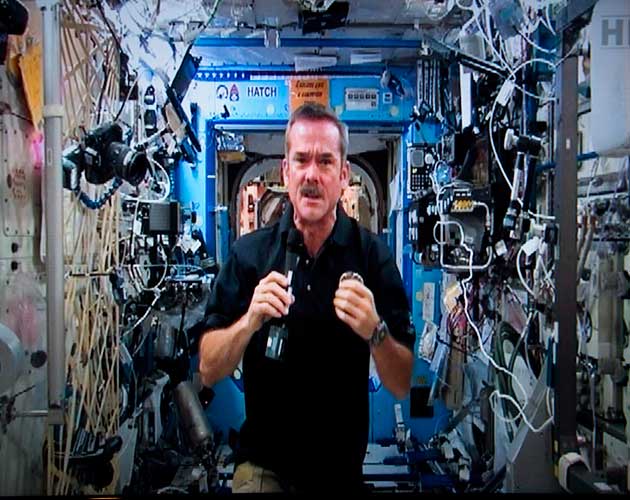 From a surreal moment as Earth-bound William Shatner (who played Star Trek’s Captain James T. Kirk) chatted with real-life Canadian astronaut Chris Hadford from the International Space Station to an all grown-up (and blonde!) Anne of Green Gables, we’ve got the latest news on arts, entertainment and culture.

Beloved Canadian actor and Zoomer cover man William Shatner engaged in a phone call that was literally out of this world on Thursday when he chatted with Canadian astronaut Chris Hadfield, who’s currently in orbit at the International Space Station (ISS). The Earth-bound star of the original Star Trek television series reportedly discussed subjects ranging from travel to Mars to the stress of the job with Hadfield, who’s poised to become the first Canadian commander of the ISS in March.

“You think about the stuff that was portrayed on television 40 years ago of people with a small hand-held device, standing on the surface of a planet talking to someone effortlessly, who is orbiting that planet,” Hadfield said during the conversation, referencing Star Trek and other sci-fi shows. “That’s what you and I are doing right now.”

Shatner and Hadfield chatted for about 10 minutes, ending with plans for the two space men to meet at a cottage this summer.

“I look forward to meeting you in person,” Shatner said, “and sitting down with a whisky and a cigar.”

Anne of Green Gables is, apparently, all grown up

A new edition of Lucy Maud Montgomery’s iconic Anne of Green Gables series by Amazon Createspace publishing has fans hot under the collar. The reason: the girl depicted on the cover looks more like Daisy Duke than Anne Shirley.

Fans took to the Internet to voice their frustrations, though National Post sports writer Bruce Arthur may have had the funniest reaction when he tweeted, “Big Anne of Green Gables controversy seems to be brewing today, which is in the running for most Canadian thing ever.”

To top it all off, this new, Amazon self-published edition of the Canadian classic, ironically, isn’t actually available in Canada.

CBS to celebs at Grammys: Keep your “genitals” and “female breast nipples” to yourself to yourself

Yes, it’s come to this. CBS, the network that’s broadcasting the 2013 Grammy Awards this Sunday, wants to remind all celebs in attendance to keep it clean. In a request to guests, the network reportedly asked that they, “Please be sure that buttocks and female breasts are adequately covered. Thong type costumes are problematic … Please avoid exposing bare flesh under curves of the buttocks and buttock crack. Bare sides or under curvature of the breasts is also problematic … (ensure) the genital region is adequately covered so that there is no visible ‘puffy’ bare skin exposure.”

An award show without the possibility of controversial garb or an all out wardrobe malfunction? What are we watching for, the music?

Speaking of award shows, the Juno Awards announced during Sunday’s Super Bowl game that Canadian crooner Michael Bublé will host the April 21st ceremony. So far the Junos haven’t issued any wardrobe bans, which means Bublé and company are theoretically free to bare their bits all show long. Of course, the average temperature in Regina, Sask., where the show is taking place, in April is 4.5 degrees, so on second thought it may be best for everyone to keep their bits bundled up.

A special Grammy musical tribute to Band singer and drummer Levon Helm, who passed away last April at age 71, got more star-studded with the addition of legendary rocker Elton John into the mix. According to the Globe and Mail, John joins the group Mumford and Sons, Zac Brown, Alabama Shakes’ Brittany Howard, and Mavis Staples in a performance directed by musician and producer T-Bone Burnett.

Whitney still tops when it comes to love songs

Whitney Houston’s “I Will Always Love You” topped a U.S. poll of the country’s most popular love songs. Just in time for Valentine’s Day, Houston, who passed away on the eve of last year’s Grammy Awards at age 48, beat out the likes of The Righteous Brothers, Marvin Gaye, and Joe Cocker for the top spot. According to Yahoo.com, out of 40 possible choices from various eras, voters selected the following songs as the top ten:

Whitney Houston, “I Will Always Love You”

Percy Sledge, “When a Man Loves a Woman”

Joe Cocker, “You Are So Beautiful”

The Bees Gees “How Deep is Your Love”

Aerosmith, “I Don’t Want to Miss a Thing”

Foreigner, “I Want to Know What Love Is”

Bryan Adams “(Everything I Do) I Do It for You”

Marvin Gaye, “Let’s Get It On”