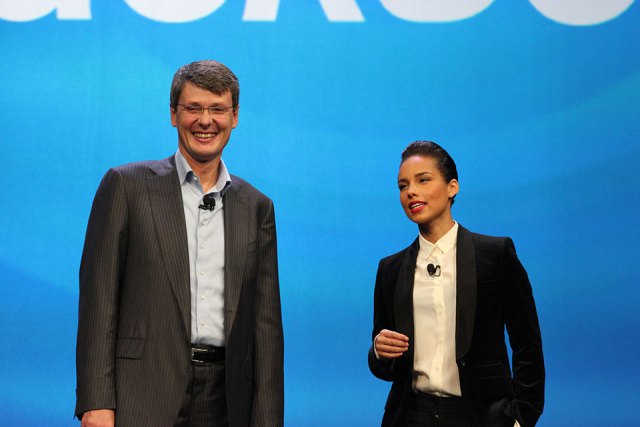 Oops! Superstar singer Alicia Keys caused an Internet stir this week when she tweeted the lyrics from Toronto-based rapper Drake – “Started from the bottom now were (sic) here” – from her iPhone, which is not ideal for someone who was recently hired by smartphone rival BlackBerry as its “global creative director.” The singer deleted the post, and then tweeted (not from an iPhone) that her Twitter account had been hacked and that the previous post wasn’t actually tweeted by her.

Now, we all know Keys isn’t going to be attending BlackBerry board meetings or crunching sales numbers for quarterly investor reports, but the optics of the situation aren’t great. Still, while she’s hardly the first celebrity to slip up when endorsing a product, this incident is small potatoes compared to the blunders other high-profile pitchmen and women have caused.

The Medium is the Message

Teachable Moment: Check which device you’re using before tweeting. The talk show queen took to Twitter to tout the new Microsoft tablet and how much she enjoyed using it. She even noted that she’d already purchased a dozen for friends as Christmas gifts. It got awkward when, like Keys, it was revealed that Oprah was tweeting using the competitor’s device – in this case, an iPad. Apple sure knows how to come out on the right end of a Twitter gaffe.

Fallout: This is Oprah we’re talking about. The only fallout was a few chuckles as Oprah’s fans are steadfast in their loyalty. And since she wasn’t a paid Microsoft spokesperson (at least, not publicly), there was no endorsement deal to be snatched back.

Is that blush or are your cheeks naturally rosy?

Teachable Moment: If you’re the face, literally, of a cosmetics company, you probably shouldn’t talk publicly about how you don’t wear makeup.

Fallout: The starlet and Yardley parted ways, with the company choosing supermodel Linda Evangelista as its new spokeswoman due in part, we’re sure, to the fact that she uses cosmetics.

Teachable Moment: Irony isn’t always fun. In 2008, Sharon Stone mused in an interview about whether an earthquake that struck southern China, killing nearly 70,000 people, was karma for the way the Chinese government treats Tibet and the Dali Lama. Because, you know, those poor victims got what they deserved for their oppressive government’s policies.

Fallout: Karma came back to bite Stone, who was dropped as Dior’s celebrity spokeswoman in China. Fallout: Both Spears and Ronaldinho, not surprisingly, lost their sponsorship deals.

Of course, long before these two gaffes, pop queen Madonna lost a Pepsi deal in the late 1980s when the company decided to use her hit song, “Like a Virgin,” in its commercials. The actual music video, however, which featured Madonna doing all sorts of things deemed controversial, such as “danc(ing) among burning crosses and is afflicted with cuts on her hand resembling the wounds Jesus Christ suffered during crucifixion,” wound up prompting boycott threats and, ultimately, forcing Pepsi to drop the song from its ads. Can’t really blame this one on Madge, though. Pepsi reportedly didn’t watch the Madonna video before making their commercial.

Teachable Moment: Not everyone has a sense of humour. Whoopi Goldberg had been promoting the weight loss system Slim-Fast for nearly a year when she appeared at a 2004 fundraiser for Democratic presidential contender John Kerry. During her time at the microphone, she made some sexual jokes that played off then-President George W. Bush’s surname.

Fallout: Conservatives spoke up and threatened to boycott Slim-Fast, prompting the company to cut Whoopi loose. In the aftermath, USA Today noted, “Slim-Fast is a unit of Unilever. Unilever executives have donated $3,000 to Bush and $1,250 to Kerry for 2004’s campaign.” In the same news piece, Goldberg shot back: “I only wish that the Republican re-election committee would spend as much time working on the economy as they seem to be spending trying to harm my pocketbook.” Teachable Moment: A sex scandal can cost you a lot more than your marriage. That’s what the one-time best golfer in the world learned in 2009, when his multiple extra-marital affairs came to light.

Fallout: If Tiger thought being attacked by his furious wife with a golf club was bad, the sting likely didn’t last as long as the drain on his bank account when a number of corporate sponsors cut ties with him. Just last summer, CNN reported that since the infidelity scandal broke, “Woods’ estimated endorsement income fell to $54.5 million in 2011 from $60 million in 2010 and $92 million in 2009.” Keep in mind that Woods and his now ex-wife, Elin Nordegren, agreed to a $110 million settlement. Nike, Wood’s most lucrative backer, stayed by his side at the time, though it recently signed the world’s new No. 1 golfer – Rory McIlroy – to a whopping 10-year $250 million deal. That’ll buy a lot of golf balls.

Teachable Moment: Don’t mess with Alec Baldwin. After the now infamous tussle between the actor and American Airlines that saw Baldwin booted off a plane for defiantly playing a game on his cell phone after he was asked to turn it off, U.S. supermarket chain Wegmans pulled their television ads that he appeared in. That seemed like the end of the discussion, until…

Fallout: It turns out Baldwin has a heck of a lot of friends. Enough, at least, to bombard the supermarket chain with messages demanding the actor’s commercials return to the air. Wegmans bowed to the pressure, providing Baldwin with both a moral and a financial victory.