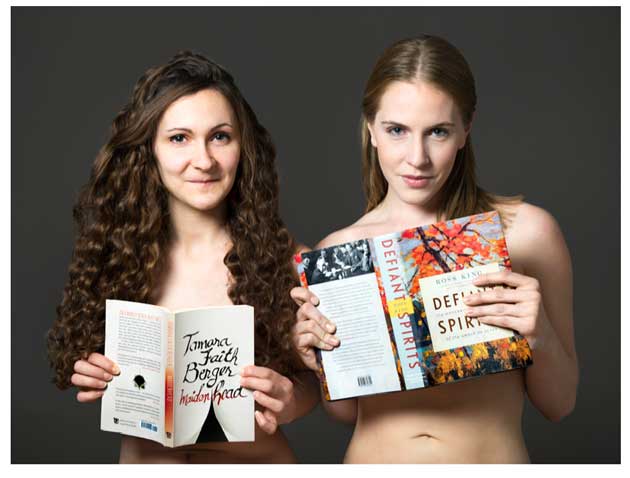 Amanda Leduc and Allegra Young: Bare it for Books

JUNO nominees, bare-bottomed writers, a real-life Vulcan moon and more in the week leading up to the 85th Academy Awards.

The nominees for the 43rd annual Juno Awards were announced on Tuesday morning in Toronto, with boomer acts such as Leonard Cohen, The Tragically Hip and Céline Dion receiving multiple nods. The 78-year-old Cohen, whose 2012 album Old Ideas nabbed him Artist of the Year, Songwriter of the Year and a Juno Fan Choice award nomination, faces competition from the likes of Justin Bieber and “Call Me Maybe” singer Carly Rae Jepsen.

We’ve got a full everythingzoomer.com report on the boomer nominees here.

And the Glenn Gould Prize goes to …

French-Canadian playwright and director Robert Lepage. The $50,000 prize was announced this morning at Toronto’s Sony Centre for the Performing Arts. The Glenn Gould Prize “is awarded to an individual for a unique lifetime contribution that has enriched the human condition through the arts.” Lepage, 55, is the 10th recipient of the prize, which was first given out in 1987.

As the award recipient, Lepage is also tasked with selecting the recipient of the Glenn Gould Protégé Prize, a $15,000 prize that goes to an up and coming artist.

Click here for more info on the prize and the selection jury.

Authors are used to baring their souls for the sake of their craft, but now 12 Canadian writers are baring a lot more in support of PEN Canada. The Bare It for Books Campaign: “a charity movement that’s going to see a number of well-known Canadian authors posing in the nude for a 2014 calendar … to raise awareness of both free speech and Canadian literature.”

In other literary news, the controversy surrounding author Hilary Mantel’s comments about Kate Middleton is, apparently, helping the author’s book sales. CNN reports that the 60-year-old English writer, whose novels Wolf Hall and Bringing Up the Bodies won two consecutive Man Booker Prizes, is seeing “a spike in books sales.” As well, they noted Mantel’s U.K. publisher recorded a near “100 per cent increase in [e-book] sales of ‘Wolf Hall’ [Tuesday, when the controversial comments came to light] as compared to the day before.”

Star Trek star and former Zoomer cover man William Shatner has been keeping himself busy in recent weeks when it comes to space-related endeavors. First, he had an out-of-this-world telephone conversation with Canadian astronaut Chris Hadfield and now he’s campaigning to have a new moon discovered around Pluto named Vulcan.

Fans of Star Trek will, of course, note that Vulcan is the name of the race and home planet of Lieutenant Commander Spock, played by Leonard Nemoy, who worked alongside Captain Kirk, played by Shatner.

Scientists have asked for suggestions regarding a name for the newly discovered moon, and Vulcan is reportedly leading the vote.

Click here for more information on the Vulcan campaign and how you can vote.

For those looking for an early Oscar fix, everythingzoomer.com looks back on some of our favourite Oscar acceptance speech moments.