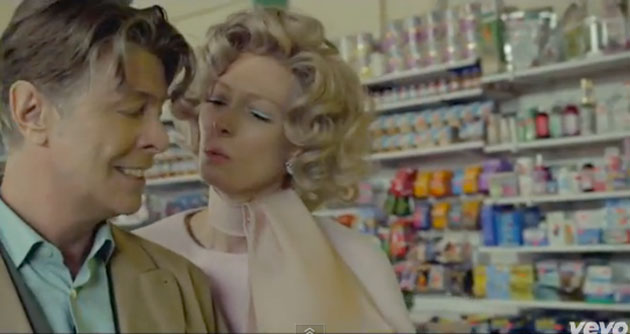 It’s sad to say but, thanks to the proliferation of sex tapes, paparazzi shots, Twitter tattle and “sources close to the couple,” Hollywood has lost the element of surprise. Whispers and gossip column chatter that serve as real-life spoilers preface nearly every celeb-shocker – from break-ups to baby news.

Enter David Bowie. Following a heart attack in 2004, the legendary rocker remained relatively quiet, quitting both the stage and the studio. Then, just when you thought Ziggy Stardust had retired to Mars for good, Bowie shocked everyone with a brand new single, “Where Are We Now?” released on his 66th birthday this past January.

Free from the prying ears of the media and expectant fans, Bowie was free to record and release The Next Day – his first new album in a decade – at his own pace. It hit stores on March 8 and now, 20 years after his last chart-topping disc – 1993’s Black Tie White Noise – Bowie’s back atop the British album charts. According to Reuters, “in its first week on release, (The Next Day sold) more than 94,000 copies to become the fastest-selling album of 2013.”

The Toronto Star’s Nick Krewen gave the album three-and-a-half out of four stars, noting, “The Next Day satisfies the fan base who wondered whether [Bowie] had another strong effort in him and proves that at 66, age is nothing but a number.” Vanity Fair called The Next Day a continuation of “Bowie’s Renaissance,” which they trace to 2002’s Heathen, while Andy Gill of Britain’s The Independent got a little over-excited, declaring it, “the greatest comeback album ever.”

No Bowie disc has ever topped the charts in the U.S., however, so he could pull off a trans-Atlantic double-header when that chart is released. Still, whether he does or not, the almost universally favourable reviews prove that aside from the fact that “he still has it,” perhaps Bowie did something right by staying tight-lipped about the project as it progressed. Now, let’s just hope there’s a “surprise” concert tour in the works as well.