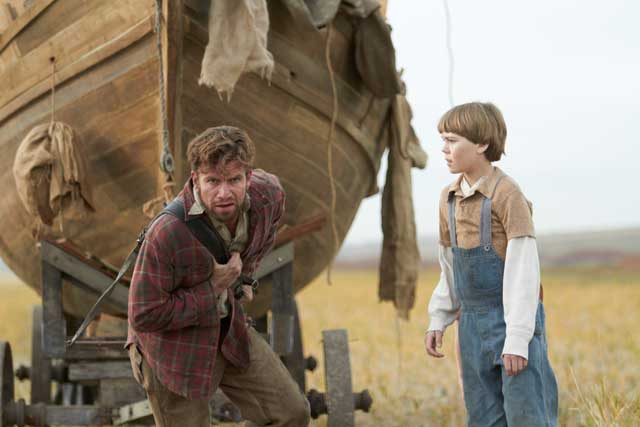 “I think that there’s a definite relationship between farming and filmmaking – in this country anyway,” says Canadian filmmaker David Mortin, who, along with his wife Patricia Fogliato, penned the recently-released film Mad Ship. It may seem like a strange comparison if you haven’t taken a stab at making a Canadian film, for which securing funding is often akin to drawing blood from a stone. Or, if you haven’t heard of Tom Sukanen, a depression-era Finnish immigrant whose dream of establishing a farm in the Canadian prairies dried up with the rest of his land.

Sukanen remains somewhat of a folk hero in Western Canada, and Mortin and Fogliato used his tale as the basis for Mad Ship. The duo recently sat down with Zoomer’s Mike Crisolago to discuss the film, the plight of Canadian immigrants, and the link between farming and filmmaking.

MIKE CRISOLAGO: Tell me about adapting the true story of Tom Sukanen for the film.

DAVID MORTIN: This image of this guy dragging this sailing boat across the desert, after the droughts of the dust bowl, just really had huge metaphoric value for me. Tom Sukanen was very eccentric and really kind of an alienating character. So we started with that final image of this man dragging a boat through sand dunes and thought we’d work backwards and imagine what could have brought him to that point, but in a way that was a little bit more accessible and more universal and romantic than what the real story was. All of that was kind of gleaned from a lot of true, historical resources from the time.

MC: What was the metaphoric value for you?

DM: The idea of someone driven to succeed at something and driving themselves and everyone around them who they love and who loves them to the point of potential ruin. For me that raises a major question of is that a really honorable tenaciousness that leads eventually to success or is it purely an act of egotism that is potentially harming the people you care about? And then I think we both relate to it being independent Canadian filmmakers. We know a little bit about drought and we know about sowing seeds that don’t come to fruition.

MC: The film is also the antithesis of the “traditional” Canadian immigrant story of someone who comes here and establishes roots and a better life for their family.

PATRICIA FOGLIATO: We were making documentary films for 20 years before making this film and the theme of immigration has been really important to us. [We’ve] heard over and over again that when people first come here they come expecting the streets to be paved with gold. Then, when they get here, it’s much harder than they expect it to be. It’s really a common thing for people to want to turn around and go back home. But they usually don’t, and often it’s because they don’t have the money to do that and by the time that they do they feel like they belong here.

MC: What challenges did you encounter filming in Manitoba?

DM: We had thought, being from Toronto, that we’ll go out to the prairies and it’ll be so easy to find an old farm house and barn and a pristine horizon landscape with a wheat field. It was actually a huge problem because there are less and less wheat fields. Also, we think of the prairies being wide open but there’s a lot more modern stuff on the horizon. And then we realized the only way we could get what we’re looking for was to build the house and the barn as a set. We had no budget for that, so that became a real strain on our resources.

PF: For a good part of it we were eating our meals in the barn at a pig farm.

MC: The glamorous life of Canadian filmmakers. [All laugh] Tell me about working with your lead actors, Nikolaj Lie Kaas and Line Verndal.

PF: It actually added a lot to the whole milieu on set because they were outsiders – the fact that they actually were Scandinavian. They could turn to each other and speak their respective languages [Danish and Norwegian ] and understand each other. I think it kind of created this culture between them and brought them close together. There was a lot of natural chemistry between them, so it just kind of added to their performances.

MC: What do you hope audiences will take away from this film?

DM: We’re still in a very difficult economic period, there’s a lot of people who are in that situation of facing foreclosure and losing their home. We’re also in a period where that kind of draught is becoming, increasingly, a reality and is an ongoing threat. So we’re interested in seeing those themes being brought back into the public awareness. And, on a more intellectual level, I’m interested as a filmmaker in stories that mythologize our history. And we don’t tend to, as Canadians, tell our stories in that kind of grand scale. As much as our resources would allow us with this little film, we wanted to tell a big story.

For the Popcorn Picks review of Mad Ship, click here.