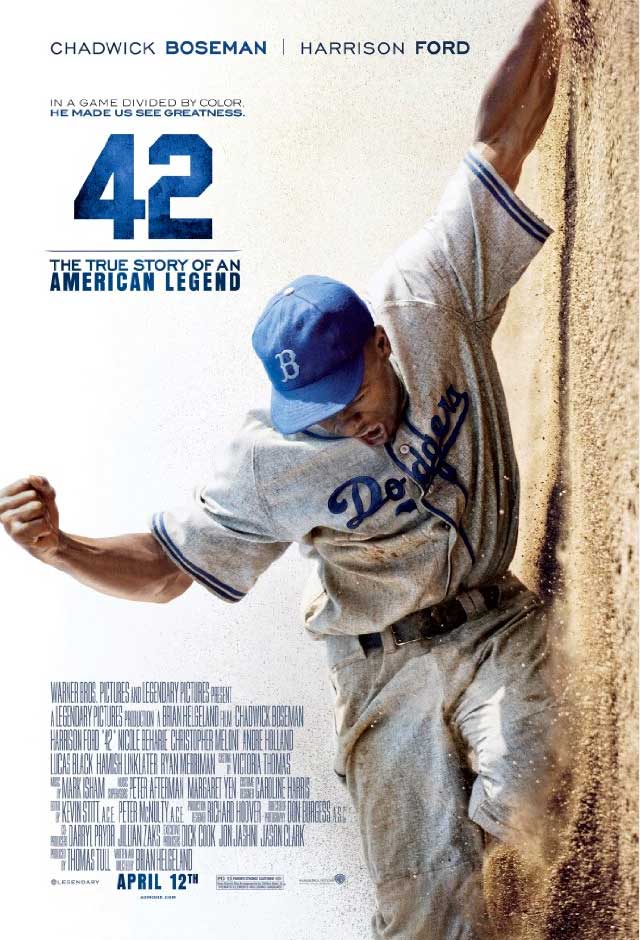 Choice Quote: “You give me a uniform. You give me a number on my back. I’ll give you the guts.”  –Jackie Robinson

What’s it about? Spanning the years 1945 to 1947, it recounts the journey of Jackie Robinson, the man who broke baseball’s colour barrier, from Negro League star to the minor-league Montreal Royals and, finally, his award-winning rookie year with Major League Baseball’s (MLB) Brooklyn Dodgers.

Is it any good? 42 is a fantastic tribute to Jackie Robinson’s heroism wrapped in a Hollywood package that’s shinier than a ball player’s cleats on opening day.

As a period piece, director Brian Helgeland did a great job of nailing down the details of the time period, from elements as large as the recreations of historic ballparks like Ebbets Field in Brooklyn and the player uniforms to those as small as an old phone and office accessories (shot up close with confidence).

Most of the acting is also well done. Chadwick Boseman shines as Robinson, exhibiting confidence on the base paths while telling more of a story with his facial expressions as he endures taunts and slurs than some actors do with dialogue. Nicole Beharie is radiant as Rachel, his young bride and biggest supporter, while Wendell Smith, played by Andre Holland, proves an unsung hero of the film – a young black journalist who chaperones Robinson and perseveres as he’s forced to sit with a typewriter on his knees in the bleachers because he’s not allowed to join the white reporters in the press box.

The ballplayers who share the field with Robinson carry their own, but John C. McGinley is exceptionally memorable as legendary broadcaster Red Barber, belting out classic “Barberisms” such as noting a game is tied “tighter than a new pair of shoes on a rainy day.” Harrison Ford, however, as Dodgers manager Branch Rickey – who claims he only wanted to hire Robinson to bring in the African American fans, though we learn later that’s not the only reason – is more like a caricature of a 1940s baseball manager than a depiction of the real thing. Someone more naturally and physically suited to such an integral role would have worked better.

The thing that irks many about this film is its extremely clean, polished finish. As a baseball movie, you expect that torn uniform, tobacco spit grit, but instead we have a whole lot of swooning orchestral arrangements, slow motion running the bases, warm and fuzzy exchanges, literal religious preaching about morality, and blatantly cheesy lines.

Still, I don’t believe this is a supposed to be a “baseball movie” in the way that, say, Batman isn’t a film about Gotham City. The baseball diamond is simply the main stage on which Robinson’s heroic actions unfold. The film’s most important job is relating just how much racism and hate Jackie Robinson rose above to succeed. Watching as an opposing team’s manager stands on the field and hurls racist slurs at Robinson as he bats, or listening to the deplorable taunts from the crowd, or witnessing his white teammates sign a petition saying they won’t play with him, or seeing how he’s discriminated against off the field while travelling with his team, hits home how much ignorance and hate Robinson truly overcame.

Yes, you’ll have to swallow the typical Hollywood packaging, but beneath the glossy wrapping the true life story told here is a vital one that every person, baseball fan or not, should see.

Can I bring my kinds and grandkids to see it? Yes, but be warned it contains a lot of racial slurs, including rampant use of the N-word.