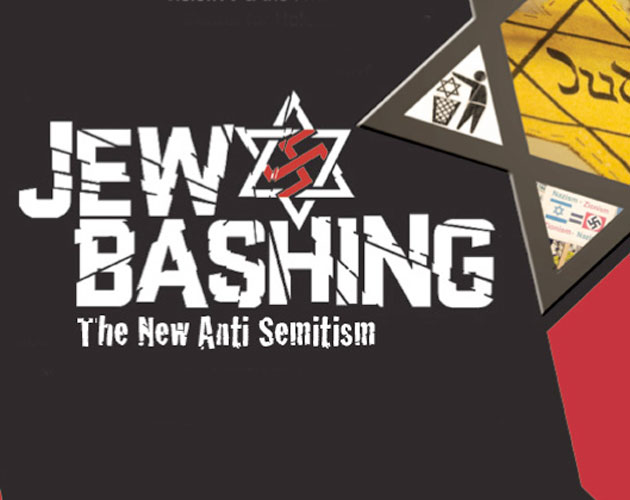 First, full disclosure: yes, I work for ZoomerMedia (the parent company of VisionTV); no, I am not Jewish; and, absolutely, I was slightly surprised when the invitation to a media screening of a film called Jew Bashing landed on my desk.

The name of the four-part documentary series is, of course, purposefully provocative (the full version being Jew Bashing: The New Anti-Semitism). Libby Znaimer, VP of news on AM740 and Classical 96.3 FM (both ZoomerMedia properties), who hosted the screening event, even noted that some invitees were offended by the title on the invitation.

The straightforward approach, however, is no surprise considering the fact that director Martin Himel cut his journalistic chops in various Middle Eastern war zones over the last 30-plus years. Clearly he’s not one to tiptoe around the outskirts of a conflict – be it born of race, religion or geography. This is the same director who infiltrated hostile regions of Egypt and Iraq for his 2012 doc Persecuted Christians.

With Jew Bashing, you get exactly that – four films focusing on four regions of the world (Canada, the U.S., Europe and the Middle East) where anti-Semitism is alive and well.

During our media screening we watched the documentary that focused on the United States. The film posits that the “old anti-Semitism” of Jewish people as “Christ killers” is passé. Nowadays, the most fervent anti-Semitism targets Jewish people as powerful overlords who’ve got the American government in their back pockets. Himel likens the idea to Nazi propaganda, noting the message boils down to “Jewish disloyalty and Jewish lobbies pushing for unwanted wars.” And it’s not just the White House under their thumb – they also supposedly control Wall Street and even Hollywood. Does that mean terrible films like Battlefield Earth and most anything with Nicholas Cage were Jewish plots to dull America into a state of boredom to allow Jewish leaders the opportunity for a bloodless coup? The infamous image of the Jewish race depicted as an octopus even makes an appearance – always an anti-Semitic crowd-pleaser.

Of course, you could dismiss these charges as baseless theories cooked up by bigoted nutcases. And you’d be right. But the problem is these nutcases have a following. A large one.

The fact that Himel manages to lure anti-Semitic Internet bloggers out of their holes (which, to no one’s surprise, are often situated in very rural, very un-ethnically diverse American towns) and convince others to speak on camera and defend their views is a testament to his investigative skills. Of course, these were the same scenes that often had members of the audience gasping in disbelief. The crafty hidden camera work inside an anti-AIPAC (American Israel Public Affairs Committee) meeting evoked the same reactions. It’s the realization that this unbridled hatred of an entire race – yes, in the year 2013 some even call for the extermination of all Jewish folk – isn’t taking place at KKK or SS meetings, where the bigots are identifiable by the hoods on their heads or the bands on their arms. These are people who look like the nice lady you might bump into on the street or the smiling gentleman who helps you bag your groceries.

Himel also tackles the issue of anti-Semitism as it pertains to the Israeli-Palestinian conflict, featuring both Palestinian activists on the extreme right, calling for the abolishment of the Jewish state, and those on the extreme left – a gay rights group dedicated to the non-violent destruction of Israel. There’s not a lot in the film about rational debate or solutions for the Israeli-Palestinian conflict, though there are activists such as author Alice Walker, who wrote The Color Purple, who considers her activism as a defence of Palestine as opposed to anti-Semitism – not that the film suggests that she is anti-Semitic.

The point of the film, however, isn’t about that conflict. It’s about the fact that we all know anti-Semitism still exists in the world, alongside racism, prejudice and other disfigurements of human emotion. But what do you do when confronted with it, when it looks into the camera and smiles its toothless grin back at you, and then points to the millions of others just like it on the Internet and at rallies and in malls and workplaces and homes not so different than yours or mine? Jew Bashing: The New Anti-Semitism is an eye-opener, whether you’re Jewish or not.

All installments air on VisionTV. For more information about each episode, click here.