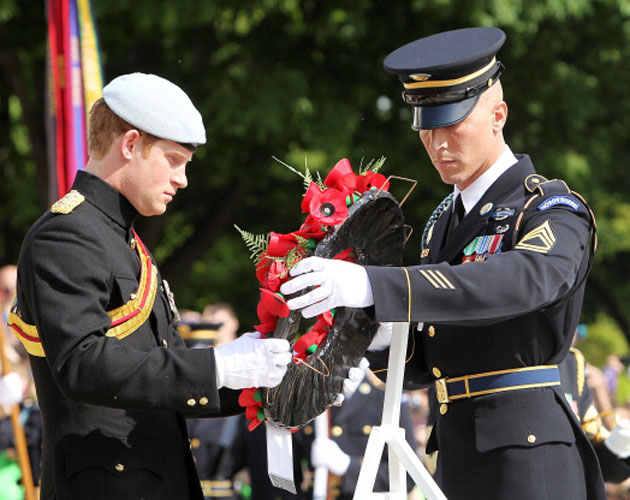 The flame-haired royal knelt down on one knee and placed the mixed bouquet of flowers on the grave of the former politician – who was assassinated on November 22, 1963 – at Arlington National Cemetery, Virginia, six months before the 50th anniversary of his death.

Harry – who is known as Captain Wales in the Army Air Corps, in which he works as an Apache helicopter pilot – took a moment to reflect as he placed flowers on the tombstone, where he spent around five minutes.

Earlier in the day, the third inline to the throne paid his respects to America’s fallen soldiers at the cemetery.

He laid a wreath at the grave of US Army Specialist Michael L Stansbery Jr. – who died in Afghanistan on July 30, 2010, aged 21 – and left a note expressing sympathy about his “brothers in arms”, signed from “Captain Harry Wales”.

Harry then took time walking between the rows of graves and stopped to read some of the inscriptions.

He later laid a wreath at the Tomb of the Unknown Soldier and took in the resting place of Major General Orde Wingate, a British officer who died in an air crash in 1944.