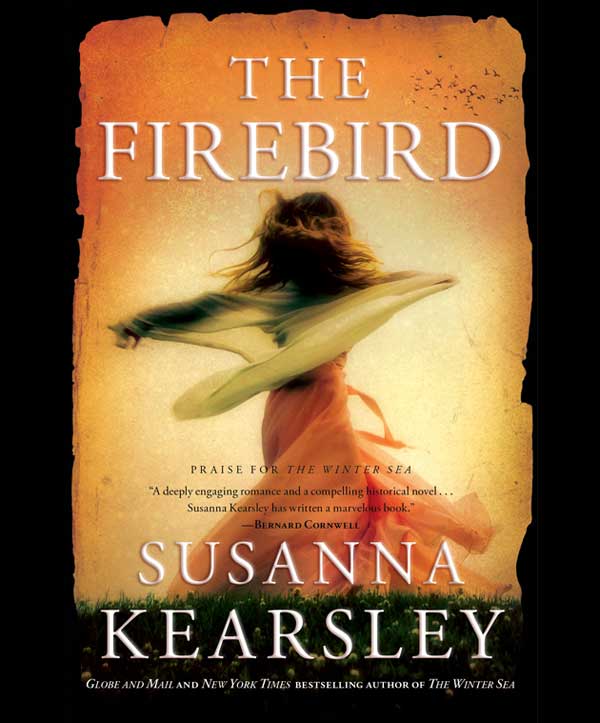 New York Times bestselling author Susanna Kearsley likes adding a bit of the fantastic to her historical fiction. The Canadian writer, and former museum curator, is celebrated for her ability to weave modern day and historical intrigue; and most of her carefully researched books include a compelling element of the paranormal.

In her latest, The Firebird, heroine Nicola Marter has the gift of seeing things when she touches an object; glimpses of those who have owned it before. While she normally tries to ignore her ability, her job with a dealer specializing in Russian art, takes her to St. Petersburg, and on a journey into the past to find the story of a dying woman’s precious family heirloom.

Zoomer sat down with Kearsley to talk inspiration, psychics and future projects.

Athena McKenzie: The Firebird is connected to your previous novel, The Winter Sea, but not necessarily a sequel. Would you recommend reading The Winter Sea first?

Susanna Kearsley: I specifically set out not to do a sequel. A sequel means that the reader has to read the first one first, and that’s demanding a lot of the reader. I wanted to write a companion book, so the two would play off each other, and if you read one, you could then read the other and get more out of it. But The Firebird does stand on its own.

AM: I understand that these books came out of your research into the Scottish Jacobites. Did it surprise you when you took it you to Russia?

SK: Yes. I had known from the research I had done for the Winter Sea that Thomas Gordon [one of the real historical characters] had ended up in Peter the Great’s navy. A lot of naval men did end up going into Peter the Great’s navy… But what I didn’t realize was how much plotting and intrigue was going on — how many other Jacobites were in St. Petersburg at the time. And just how vital that was to King James. And how many comings and goings there were from the Stewart Court and the closeness between those two courts. That was a big surprise to me. I found that out by reading a book called The Jacobites in Russia, 1715-1750 by Rebecca Wills. In it, she mentioned Gordon, who was a familiar face to me. As much as possible, you have to read as widely as possible, to get as many voices and opinions as to what was going on at the time. For me, the fun comes in going to the National Archives of London and sitting down for a week with Thomas Gordon’s letter book, in which he copied all of his correspondence, except for the most secret stuff. You get a real feel for the man himself when you read his letters…

AM: Is it hard to find historical source material with the woman’s voice and perspective?

SK: It’s not that it doesn’t exist, it just doesn’t exist in the same quantity, and often it’s been filtered. In these letters by Gordon, for example, he talks about his late wife and his daughters. But again, you are seeing it through his eyes. What becomes valuable to me, is when you flip over one of the letters he has received and his wife has written a note on the back, so you hear her voice. There is a letter in his letter book from his step-daughter that I actually reference in The Firebird because it was such a moving letter…

When women write historical fiction, one of the things we can supply is the female perspective. A lot of the decisions that were made at the time, weren’t made for reason of money, profit, or honour. They were made for the same reasons we make decisions today — your family mattered and you wanted to be closer to a mother who was ill or you wanted to give your children more opportunity.

AM: What is your attraction to the paranormal?

SK: I always loved the concept of things we can’t explain. I have a very scientific, searching mind. I always like to know why. And it intrigues me that there are so many things we don’t know why, and yet there is evidence that they exist. To me, that is an interesting dichotomy. We have universities who are researching these sorts of things. There is a lot of evidence that certain people have abilities to do these sorts of things. And some of it is irrefutable evidence. You can’t explain it away and that makes it interesting. I always try to ground it in fact. What the current level of research is.

AM: Are you working on another book?

SK: Yes! What happens is, I get into these letters and I get connected to the people and I get very fond of them. When you’ve read hundreds of letters and diary pages, the person becomes very real to you and you want to restore their place in history and tell their story… It’s hard to let go of those people once I’ve finished a book and solved the main problem. The book that I’m working on now doesn’t use the same characters, although [a couple] will make cameo appearances. What I tend to find is a little incident that happened that was hugely important to the people at the time. It would have been a crisis and letters would have been flying back an forth, and yet it doesn’t figure in the history books. So, I found an incident like that, that happened in Paris in the 1930s.