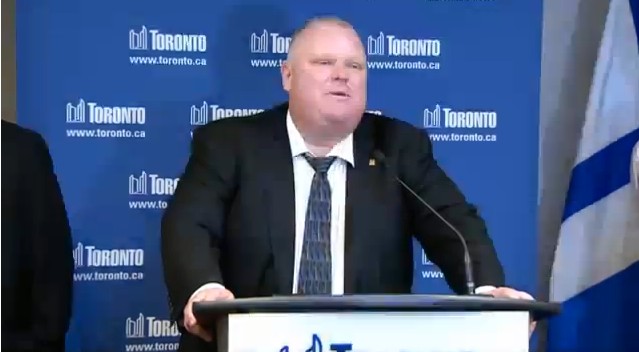 Here we are again, discussing the latest on Toronto’s most polarizing mayor and his excess media attention. Just in case you happened to enjoy your weekend at the cottage, sans Twitter/news updates, we share what you might have missed. A lot can happen in 48 hours.

Friday afternoon: After U.S.-based website Gawker makes it clear to Crackstarter donators that they have lost contact with the sellers of the alleged crack video, Ford and his vocal chords come out of the woodwork. He declares at a press conference, “I do not use crack cocaine. I don’t use crack cocaine nor am I an addict of crack cocaine.” “Hmm, interesting choice of tense” is what many reporters were thinking. “As for a video, I cannot comment on a video that I have never seen or does not exist,” he said. Another interesting choice of words considering Ford initially told reporters that he just had not seen the video in question. Reporters questions were not addressed because in true Ford manner, he would not take any.

Saturday morning: The Globe and Mail publishes a very long investigative piece on the Ford family and their history of dealing drugs, specifically hashish, in the ’80s. After more than 18 months of researching and interviewing, they feel now is the time to share their story. One thing, all of the sources are “anonymous” because participants are too scared of the Fords and their power in the city. That’s useful. Spark debate over whether this is relevant reporting or a “smear campaign.”

Sunday: Maggots. That’s what Rob Ford called the media on Sunday during his radio show when he denied that the alleged crack video even existed. Let’s stop for a moment: when was the last time you heard the word maggot flung in an argument by an adult, let alone the political leader? Moving on, Ford also used a very irrelevant analogy about the media, saying, “No matter what you say, I found out, to the media, you’re never going to make them happy. You can give them 10 bars of gold and they’re going to want – why don’t I give 15 bars of gold? Well, you know what, folks, that’s the media that we have, unfortunately.” He also called their reporting shenanigans. In a press conference on Monday regarding the resignation of two senior staff, Ford apologized for the maggot comment.

Monday: This morning, there are reports that a senior member of Rob Ford’s office believes the alleged video exists and was interviewed by police last week. The contact also believes there is a link between the video and a recent Toronto homicide. This story is still developing but many are speculating that they are referring to the homicide of the drug dealer Anthony Smith who allegedly recorded the crack video and was photographed with Ford.

This is the stuff television movies are made of, folks.