Books That Make for Addictive Television 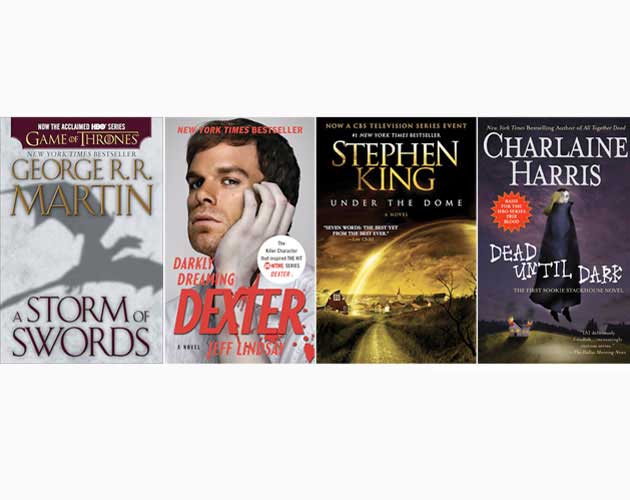 A reader is rarely happy with the results when a beloved novel is adapted for the big screen. No matter how much is squeezed into the two hours, it’s difficult for a film to capture everything in the book. But what about television? The medium allows for a much deeper exploration of its subject matter over a extended time frame. Of course, it can also mean completely different characters and contentious new plot lines. Whatever the case, it makes for addictive TV. If you haven’t already, check out these inspiring titles, which have made it to the small screen.

A Storm of Swords

Readers of the Song of Fire and Ice series love hearing reactions from non-readers about the TV show Game of Thrones. And their response usually is, “Read the books!”  The third (and the fourth) seasons of the show are based on the third novel, A Storm of Swords, in the planned seven novel series by George R. R. Martin, so there’s lots of revenge, battles, double-dealing, and lust to come after the season three finale this Sunday.

Initial reviews of the TV series, based on Stephen King’s 2009 novel of the same name, are promising. Fans were worried that the dark tale of a small town cut off from the rest of the world by a mysterious invisible barrier would get softened by network television. But it appears that the show is as chilling and ominous as the book. If you’re someone who likes to read the source material before indulging in the movie or television show, get cracking —  Under the Dome weighs in at more than 1,000 pages and the series premieres on June 24th.

The first season of Dexter closely followed the first of the crime thrillers by Jeff Lindsay about a Miami forensics expert who spends his days solving murders, and nights committing them. The show has since deviated from the books, though its protagonist is still very much Lindsay’s dark creation. The eighth and final season of the show airs starting at the end of June.

The Southern Vampire Mysteries, Charlaine Harris’s kooky and sexy world of vampires, shape-shifters and witches makes for much-talked about TV in True Blood. While the first season of the show stuck to the source material, it has moved away from the book series, which Harris wrapped up with the recently published thirteenth title Dead After After. The sixth season of True Blood starts June 16.