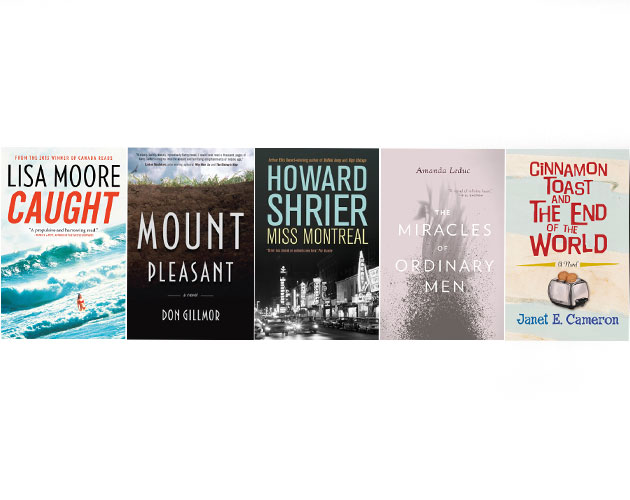 Wear your maple leaf on your (book) sleeve this holiday weekend by reading one of our Canuck picks — all by Canadians and set in Canada. From drug running on the rocky shores of Newfoundland to miracles on the hard streets of Vancouver, these aren’t your typical CanLit fare. But they are a great indication of the stellar writing talent in our country.

Caught by Lisa Moore: From the Canada Reads winning author of February comes a fast-paced tale of misspent youth. Drugs and secrets propel this gripping literary adventure, which starts with a Newfoundlander serving time in a Nova Scotia prison busting out to pull off the ultimate pot heist.

The Miracles of Ordinary Men by Amanda LeDuc: Two separate but connected story lines form the core of this haunting debut novel: Sam, a man who wakes up one day to find himself growing wings, and Lilah, a woman who has lost her brother to the streets of Vancouver. As each struggles with their own spiritual path, they find themselves transforming in subtle and terrifying ways.

Cinnamon Toast and the End of the World by Janet Cameron: Set in 1987 in rural Nova Scotia, this is the tragic/comic story of Stephen Shulevitz, a bright, socially awkward teenager struggling with the fact that he’s in love  — with his best friend Mark.

Mount Pleasant by Don Gillmor: Named for Toronto’s iconic cemetery, Gilmor’s second novel is a entertaining social commentary of excess and middle age. When his elderly father dies, Harry Salter expects his inheritance will be enough to free him of his mountain of debt. But when the will is read, he discovers the money is gone, sending him on a quest to find out what happened to the his family’s fortunes.

Miss Montreal by Howard Shrier: Montreal writer Howard Shrier is back with his acclaimed mystery series featuring P.I. Jonah Geller. After the events of the previous installment, Boston Cream, Geller can’t show his face in the U.S. again. But he’s got a new case in Montreal — an old friend has been murdered and the police investigation is stalled.