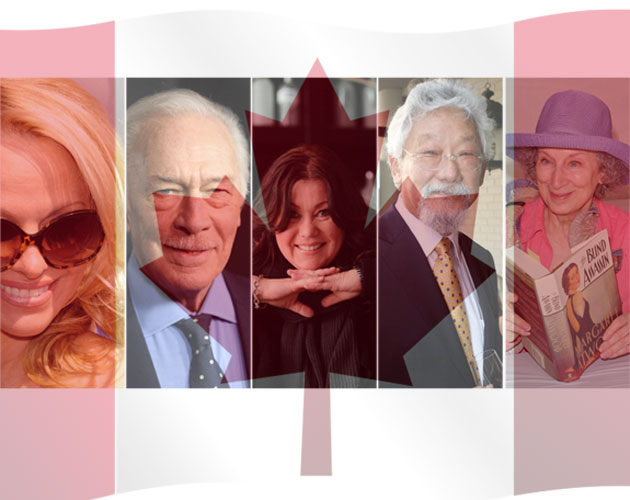 Canadians often take flack for being less “cool” than our neighbours to the south. We’re too polite, we’ve got too much snow, and, of course, don’t forget “aboot” our funny accent. But we’ve got our share of cool Canadians as well — and we’re not just talking about the ones who live in Nunavut. And even better — they’re all zoomers. So while this land may have given birth to a litany of lame stereotypes, in honour of Canada Day we’ve complied the following list of incredibly influential and uber-cool Canadians (feel free to add your own picks in the comment section below).

Like a fine wine, Zoomer’s July/August 2010 cover star Christopher Plummer only gets better with age. The dashing 83-year-old became the oldest actor to win an Academy Award last year for his supporting role in Beginners. He also joined ZoomerMedia founder Moses Znaimer as the lead patron of Dying with Dignity, the national member-based organization advocating end-of-life options in their new Patron Program. Dying With Dignity supports medically assisted dying only for those who meet strict eligibility guidelines.

So, what makes him such a cool Canadian? How about the fact that he wore his Order of Canada pin during his golden evening at the Oscars? When asked about it by a reporter, he replied, “I do because I sort of feel that I’m in a way representing my country here tonight…This is the highest civil honor that a Canadian can get and I’m very proud of it and I think an evening like this deserves to have all the medals and awards showing, so that’s why I did it.”

Leonard Cohen
Poet, balladeer, fedora enthusiast — our country’s most beloved baritone is about as charming and humble as they come. Take, for instance, his comments to the audience upon returning from intermission at a recent concert in Toronto’s Air Canada Centre: “Thanks so much for not going home. It would be terrible to come out here and find a skating rink.” Hockey and humility in one — how Canadian is that? His stardom transcends all ages and race, and he continues to perform to sold out crowds worldwide at the age of 78. And the concert itself is no early bird special: the crooner keeps his audiences tapping their feet until the wee hours of midnight.

Martin Short
Whether as Ed Grimley, wedding planner Franck Eggelhoffer, celebrity interviewer Jiminy Glick, or any number of the multiple characters he’s taken on, funnyman Martin Short has been making us chuckle for years. The Hamilton native made the leap from Second City to Saturday Night Live seamlessly (no small feat for any Canadian comedian) and has worked alongside comedy’s best. Only Short, as Glick, could save the Canadian Screen Awards last year. Our favourite red carpet moment: Glick asks female Academy of Canadian Cinema & Television (ACCT) accountant on the red carpet who she’s wearing. She says, “It’s not that famous.” He laughs and says, “Neither are you.”

Joni Mitchell
Joni Mitchell — quite possibly the definition of “cool Canadian.” She’s a brilliant songwriter, a groundbreaking artist, and even got her face on a postage stamp. And at 70 the queen of folk can still rock a crowd, as she demonstrated recently when she returned to the stage at Toronto’s Luminato Festival. After a 12 year break from touring, Mitchell kicked off her shoes and said, “I wasn’t sure if I could sing tonight. I’m still not sure but I’m going to try.” Then, of course, she broke out into a full set to a cheering, lovestruck crowd at Massey Hall.

Gordon Lightfoot
It takes a special type of talent to turn events from Canadian history into hit songs, but Lightfoot did it with tunes like the “Canadian Railroad Trilogy.” Even today, at age 74, he’s cool enough to work a stage with nothing but his guitar and have the crowd singing along to every word. Just last year Lightfoot, Zoomer’s March 2011 cover guy, was inducted into the American Songwriters Hall of Fame alongside Tom Jones, Bob Seger, Don Schlitz, Jim Steinman and Harvey Schmid — pretty good company. His music’s also been covered by everyone from Elvis to Johnny Cash. If his songs are cool enough for the King and the Man in Black, he’s cool enough for us.

Gordon Pinsent
That beard. That voice. Those eyes. Eighty-two-year-old Gordon Pinsent is a true charmer, and he boasts an impressive resume. However, Zoomer’s November 2012 cover star’s sense of humour is perhaps his best attribute of all. Who could forget the clip of him reading Canadian pop star Justin Beiber’s memoirs (we’ve included the clip above to refresh your memory)? With the Bieb’s latest paparazzi encounters and monkey exploits, we’re crossing our fingers that Pinsent with read the “sequel.”

Margaret Atwood
You would have to be on crack to not acknowledge the literary influence of Margaret Atwood (yes, that was a dig at Toronto’s Mayor Rob Ford). Atwood’s prophetic novels and ability to embrace new technologies – she tweets constantly to her 400,000-plus followers – have wooed generation of Canadians. One of Zoomer’s first cover girls, Atwood also uses her prominent status as Canada’s Queen of Letters for good, nurturing young writers through various charities.

Chris Hadfield
Can you name the last commander of the International Space Station? Neither can we. It’s the 53-year-old astronaut’s ability to drum up interest in what he was up to as he floated around in outer space via various YouTube videos and tweets that makes him one of the coolest Canadians. To top it off, he conversed with William Shatner, sung along with The Barenaked Ladies, interacted with school children, and performed David Bowie’s Space Oddity — all from space. Wayne Gretzky
Number 99 — our very first cover star, whose hockey heroics and 894 NHL career goals ensure he’ll always hold a place in sports fans’ hearts. He’s as Canadian as they come and let’s face it: when your nickname is, “The Great One,” and it’s not meant ironically, it doesn’t get much cooler than that. Rush
This laid-back group of rockers have 14 platinum records, 24 gold and almost 40 million albums sold worldwide — and they’re from Willowdale. To top it off, the group was just inducted into the Rock and Roll Hall of Fame after gaining eligibility 15 years ago. Talented and patient – now that’s quintessentially Canadian cool. Jann Arden
We felt Zoomer’s April 2010 cover girl, Jann Arden, was pretty cool about going completely nude for a refreshing centrefold. After all, it’s not everyone who’d pose nude for a magazine centerfold with little warning beforehand. Yes she’s been scrutinized lately for defending the actions of Paula Deen, but many admire the Canadian singer’s ability to candidly speak her mind and even poke fun at herself from time to time. That is, of course, unless you live in Oshawa. Naheed Nenshi
Call him “Canada’s mayor.” Face with one of the worst natural disasters in Calgary’s history, Nenshi kept his cool, even ensuring the animals at the zoo were taken care of. Also, it helps his profile that many of the nation’s other major cities have less than stellar mayors at the helm (*ahem* Toronto and Montreal *ahem*). Though he is only 41, the social media-embracing, charismatic mayor is certainly a cool Zoomer in the making. David Suzuki
Zoomer’s October 2010 cover star, environmentalist and TV personality David Suzuki was touting going green before it became fashionable to live an eco-friendly existence. An international influencer, Suzuki has changed the way we look at our environment, and did it without boring audiences into a slumber like fellow enviro-warrior Al Gore. Constantly challenging the masses with a focus on a sustainable future, the 77-year-old continues to be a force of nature.

Bryan Adams
We might be a tad biased, but this list would not be complete without Canadian rockstar and photographer Bryan Adams. He may be 53, but his mantra of “18 Til I Die” shines through when he’s rocking sold-out crowds of loyal fans around the world. In between gigs, he also manages to find time to photograph many of Zoomer’s cover stars. And to top it off, Adams recently released a compilation of his best shots in a new book, Exposed.

Rick Mercer
Not many can captivate us in a ranting monologue, or have us howling with laughter with TV specials like Talking to Americans, like Rick Mercer. Not quite a Zoomer yet at the age of 43, Mercer’s poignant political satire is admired by many. And hey, he makes Canadian politics funny — and not in that unintentional way that many of our politicians do. If you can find a way to glean a gag from Stephen Harper’s stoic demeanor, you deserve a spot on our list. Pamela Anderson
Zoomer’s July/August 2013 cover girl Pamela Anderson graced the walls of millions of teenage boys’ bedrooms in her Baywatch red bikini back in the day. Now, years later, Anderson has not only preserved her beach bod at the age of 46, she’s used her name to help others through her extensive charity work. As an honorary director of PETA, the Vancouver native has been an animal rights activist since before her beach babe days, and just last year the star auctioned off her Range Rover for the Haitian Relief Organization. “All I had to do was look in my perfectly groomed driveway to see I do not need two vehicles. I wanted to be able to share some of my comfort with those that have none,” she said. Sounds pretty cool to us.