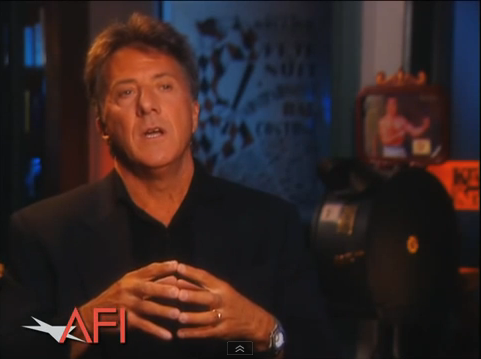 Dustin Hoffman added “Internet darling” to his long and illustrious resume today, when a 2012 interview (see video above) with the American Film Institute surfaced, in which the Oscar-winning actor gets tearful when discussing personal revelations that occurred during the filming of his classic 1982 film Tootsie.

During the interview, Hoffman, now 75, notes he didn’t want to make Tootsie – in which an out of luck actor poses as a woman to get work – unless the make-up crew could make him look believable as a female. Once that was accomplished, Hoffman said his attention turned to making himself look like a beautiful woman. After being told he could only be made so beautiful, it hit him.

“I said ‘I have to make this picture…because I think I am an interesting woman when I look at myself on screen. And I know that if I met myself at a party, I would never talk to that character because she doesn’t fulfill physically the demands that we’re brought up to think women have to have in order to ask them out.’”

Hoffman, clearly fighting back tears, went on to lament that, “There’s too many interesting women I [haven’t]…had the experience to know in this life because I have been brainwashed.”

The three-minute clip, unearthed and posted online today, became an immediate viral hit. Journalist Autumn Whitefield-Madrano of The New Inquiry suggests the reason the video touched such a nerve is, “We see him have the experience that for many women runs the course of a lifetime: recognition that beauty is not a meritocracy… that feeling that we should be beautiful—not out of some sense of womanly duty, or media pressure or any of that crap, but out of the fact of being a woman—well, that’s hard to shed.”

In an odd coincidence, when Hoffman, years ago, first decided he wanted to pursue acting as a career, it was his own aunt who warned him, “You can’t be an actor. You are not good-looking enough.”