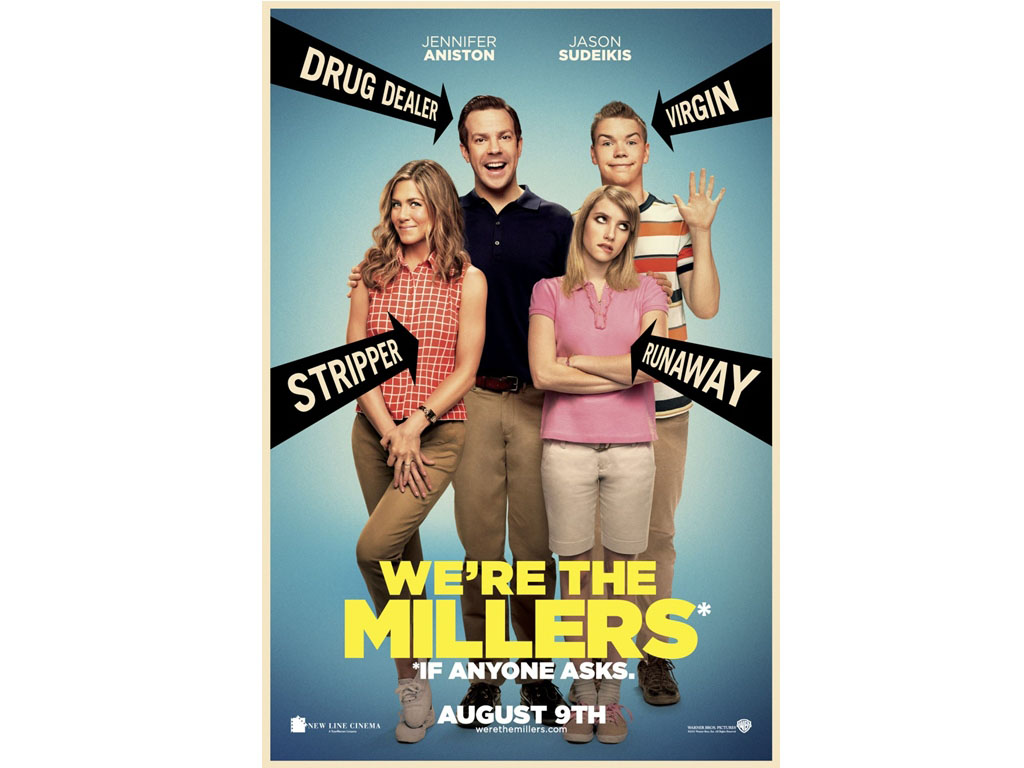 Choice Quote:  “We are not the Brady Bunch!”

What’s it about?: David Clark (Sudeikis) is a small time pot dealer in debt to his one-time college buddy turned drug lord Brad Gurdlinger (Helms). Unable to pay, David agrees to smuggle a massive shipment of pot from Mexico into the U.S. How, you ask? By enlisting three people to pretend to be his all-American family (aka the Millers) on vacation. And what a coincidence! David’s down and out stripper friend Rose (Aniston), nerdy teenage neighbor Kenny (Poulter), and local angst-ridden runaway teen Casey (Roberts) are all available to help, and all in need of a cut of the $100,000 Gurdlinger is paying.

The good: The film has some laugh-out-loud moments. Sudeikis is best when sarcastically dressing down his make-believe daughter and the loser she dates, while Helms is easy to hate as essentially a rich and evil version of Andy from The Office. A misunderstanding involving Clark and Rose and an uber-Conservative couple they meet along the way (played pitch-perfectly by Nick Offerman and Kathryn Hahn) is a highlight, though arguably the best part of the film comes as a musical outtake in the credits. Stick around for it.

The bad: Most characters are right out of the “Stock Comedy Characters Playbook.” Sudeikis and Aniston’s romantic teases throughout are so uninspired and predictable they make Friends’ Ross and Rachel look like Katharine Hepburn and Cary Grant. Kenny is somewhat loveable, but Casey and her perennially disinterested, rolling eyes grow weary. Most of the jokes, much like the forced (with a capital F) sentimentality, can be seen coming a mile away. And as for the much-hyped strip tease…

Yes, Jennifer Aniston is in fantastic shape. The kale chips and whatever else she’s been eating paid off. In this movie, she certainly doesn’t look like someone who’s been stripping for years. But then, you didn’t actually expect forearm tattoos and a few missing teeth did you? The strip tease itself is as Hollywood cheese as it comes. For those wondering – there is full frontal nudity in this film, but it’s not here, it’s not her, and it’s not pretty.

You can’t help but feel that, at some point, the gifted Aniston took a wrong career turn and instead of ending up another Sandra Bullock she wound up here.

The ugly: Could this big-time Mexican drug cartel leader be more inept? When he discovers his henchmen were fooled into giving a haul of weed to the Millers, he leaves his army of machine gun-toting bad boys behind to chase them himself, accompanied by one very large, very dumb oaf, and somehow gets across the U.S. border. I’m no expert, but I’m not sure real Mexican drug cartels operate this way.

Verdict: I’m still wrapping my head around the fact that it took four Hollywood writers to craft this film. If you go in with low expectations, you’ll find yourself slightly amused. But one moment, when Sudeikis loses his temper, sums up the experience: “”I’m not even going to tell you the joke! You don’t deserve to know what the joke is!” Judging by the lazy story and script, apparently neither do we.

Can I bring my kinds and grandkids to see it?: There’s swearing, sex talk and some nudity, so probably not one to bring little Jimmy or Jane to before they’ve had “the talk.”

See it in theatres or rent it?: Rent it

Overall Popcorn Rating: 2.5 kernels out of 5