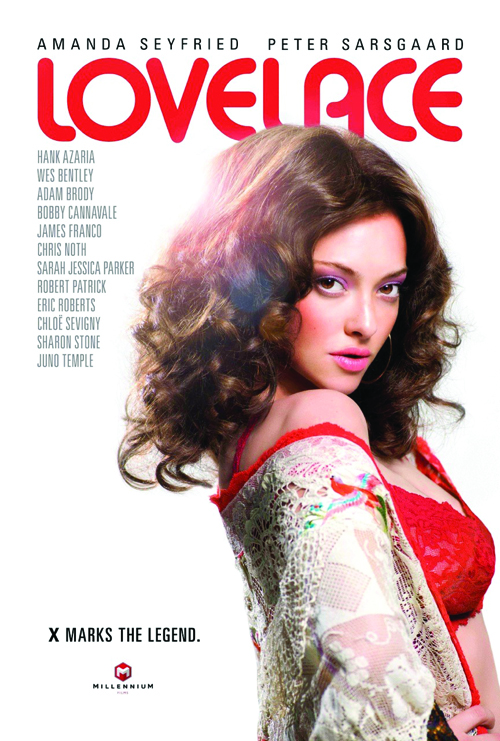 What’s it about?: Not the full truth, but not fiction either, Lovelace – violent, blunt, and a certain cultural vindication for the actress – serves as a beginner’s guide to the real life story of Linda Lovelace.

Born into a staunchly conservative family – the kind that would re-locate to Florida from New York to escape the shame of their daughter’s teenage pregnancy – Linda Boreman (Seyfried) marries slimy strip club owner Chuck Traynor (played with maximum sleaze by Sarsgaard). Traynor then forces Boreman, re-packaged as the all-American girl Linda Lovelace, into starring in Deep Throat and, after a long and brutally abusive relationship, Linda breaks free and becomes a symbol of women’s rights.

THE GOOD: Even at the height of her fame, Linda was clawing at the door for a way out and this film illustrates it painfully well, exemplified by her own mother (Stone’s fantastically infuriating as Dorothy Boreman, by the way) who won’t allow the married starlet to move back in with the family, even after finding out that Traynor beats her (“We’re not Protestants!” goes her reasoning).

Seyfried, as Lovelace, is at her best when reacting to the brutality and lack of compassion she’s continually confronted with, even if her New York accent wavers, or, at times, she’s weighed down by porn-level dialogue (while having oral sex in her parents’ kitchen her unknowing mother calls to ask her “How’s it coming?” and she, in near ecstasy, replies “Almost there ma”). Sarsgaard, however, is the standout as the brutal Traynor — so good, in fact, you’ll find yourself cheering on a gang of pornographer cronies (led by Chris Noth) as they prepare to pummel his face in.

The rest of the cast carries their weight, and spotting the celebrity cameos – James Franco as Hugh Hefner to start – becomes a bit of a game. Meanwhile, old clips of Johnny Carson, as well as the 70s-inspired soundtrack, lend a certain level of nostalgia without distracting from the seriousness of Linda’s situation. The script won’t be winning any screenwriting Oscars, but there are moments that deflate the audience’s hopes as much as Lovelace’s. Consider one of the pornographers, who bluntly tells Linda, “The world wants to see you, Linda. But they only want to see you do one thing.”

The film, as brutal as it is, is only part of the story, forgetting, for example, to mention that Linda starred in a number of shorter, lesser-known X-rated films before Deep Throat (Dogarama, Peeverted, etc.), which, as the titles imply, involve sexual acts a lot more shocking than oral sex. There’s also the Deep Throat sequel, the porn-themed farce Linda Lovelace for President, two autobiographies in which she discussed her sexual pleasures, and a Playboy spread. Some, like the presidential flop, weren’t full-on pornography, and those who know Linda better may argue about how many of these she was forced into doing, but there’s clearly a further depth to Linda’s life that the film fails to acknowledge, let alone explore.

Linda had even been back to New York and involved in a terrible car accident prior to meeting Traynor – again omitted for whatever reason.

In fairness, Lovelace is a Hollywood movie depicting many of the lowest lows of Linda’s life, so it could be an artistic choice not to pile on the horrors. Nevertheless, virtually all of those events fall within the film’s mandate of depicting Linda’s life between the ages of 20-32, so it makes you question what else the filmmakers left out.

THE UGLY: Nothing too ugly in the artistic sense, though the filmmakers’ convoluted little trick of alternating narrative perspectives to tell the same story from different viewpoints halfway through the film proves annoying.

VERDICT: Your enjoyment will likely hinge on whether or not you lived through the Deep Throat craze, as well as on how much you know of Lovelace’s life before seeing it. NPR put it best, calling it, “Boogie Nights with a tighter music budget.” And for those wondering, there’s nudity but no graphic oral sex (though plenty of implied, obviously).

Can I bring my kinds and grandkids to see it?: Really?

Overall Popcorn Rating: 3 kernels out of 5

Lovelace opens in Toronto, Vancouver and Calgary on Friday, August 9, 2013