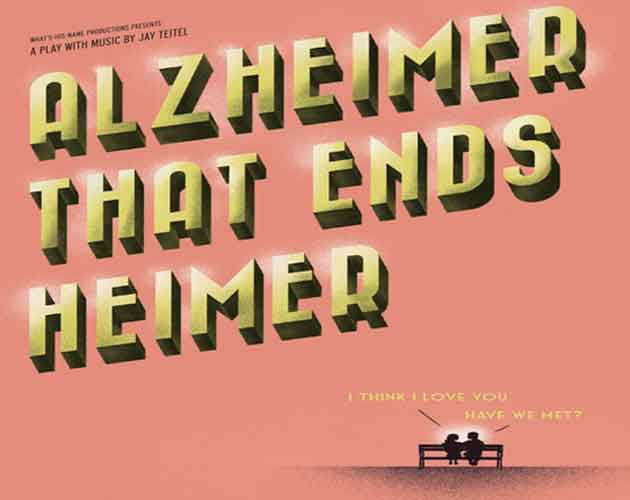 Anyone who has seen a loved one slowly waste away to the ravaging affects of Alzheimer’s disease is more than familiar with the bewildering, agonizing, frustrating, lonely, embarrassing, emotionally wrenching and tragic consequences it wreaks on all involved.

Drawing on his own experiences of watching his father gradually lose the battle to this horrifying condition, journalist/playwright Jay Teitel chose an unexpected format to dramatize his new play, Alzheimer That Ends Heimer: a romantic musical comedy – three words one doesn’t normally associate with such a depressing condition.

The play opens with Teitel, the narrator, giving the audience the standard test medical professionals use to diagnose dementia: What year is it? What day is it, What city are you in? It also asks us to remember three seemingly unrelated words, another staple of all dementia tests.

We then meet the play’s two young characters, who fall quickly in love but, thanks to a ditsy deus ex machina, are catapulted back and forth between the fresh hope of new love and the tattered surrealism of dementia. One minute they’re singing, dancing and planning for a fantastic future together, the next they’re absentmindedly wandering the stage, speaking in gibberish and trying desperately to piece together their fragmented reality.

The mastery of the play lies in the dialogue spoken between the main characters when their brains are addled, all of which is drawn from real-life exchanges Teitel had with his father as the old man retreated further into depths of dementia.

To his credit, Teitel doesn’t take the easy route and try to sentimentalize Alzheimer’s disease. It’s a terrible scourge, there’s no treatment or cure, it causes much misery and there’s really no upside to it. Instead, he uses the 75 minutes to create a touching tribute to his beloved father who fought bravely against the onrushing enemy and refused to go gently into that good night.

In closing, he asks us to remember those three words from the dementia test. As the picture on the screen slowly comes into focus, Teitel repeats the three words, his voice cracking with emotion. And as you leave the theatre and re-enter the real world, you try to remember what day it is and where you parked your car.