Behind the Cover: Margaret Atwood, September 2013 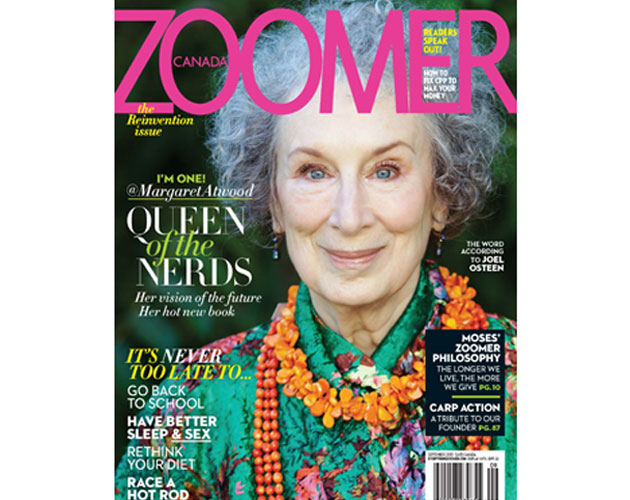 “We are shooting Margaret Atwood tomorrow afternoon,” said my editor. “Can you go on set and make sure it all looks great?”

I practically shrieked, “What! We’re shooting Margaret Atwood, and you’re giving me less than 24 hours notice!”

But my panic quickly gave way to more pressing matters: What would Margaret wear?

Since the legendary Canadian author was being interviewed for our cover story in one of her favourite cafés on Toronto’s Bloor Street West – and the photo shoot was to take place immediately after – I decided I would get clothes for the photo shoot from nearby Yorkville boutique, Kumari’s.

This little pink shop is known for its plethora of pashminas and assorted wraps in an array of rainbow colours and ropes of beguiling jewelry from Kathmandu.  I crossed my fingers that Margaret would like a dash of exotic fare. Turns out, the little pink shop is one of her favourite stores.

But after a leisurely chat with writer Lynn Crosbie, Atwood was now late for her next appointment and barely had time to do our photo shoot. With approximately 20 minutes to spare, we quickly got her hair and makeup done, and I threw a beautiful silk jacket on her, paired with a coral necklace.

We posed her against an ivy-covered wall of one of those old mansions on St. George Street which also serves as a student residence.

And here is the thing about this national treasure of ours: she is instantly recognizable like a pop star.

People cycling by during the ad hoc photo shoot were waving and calling out to her. Two young male students living in the house that we were using as a backdrop came out to see what the fuss was about. And like fan boys, they immediately took out their camera phones and pleaded to have their picture taken with Atwood.

We had a chance to change her outfit just once. Taking off the silk jacket, I wrapped a floral silk scarf around her shoulders.

When I saw the pictures later that week, I thought it looked like a beautiful painting. And Atwood never looked more divine.

To see more of the beautiful images of Margaret Atwood photographed by Tobin Grimshaw and to read the interview by Lynn Crosbie, check out the September issue of Zoomer on newsstands now.