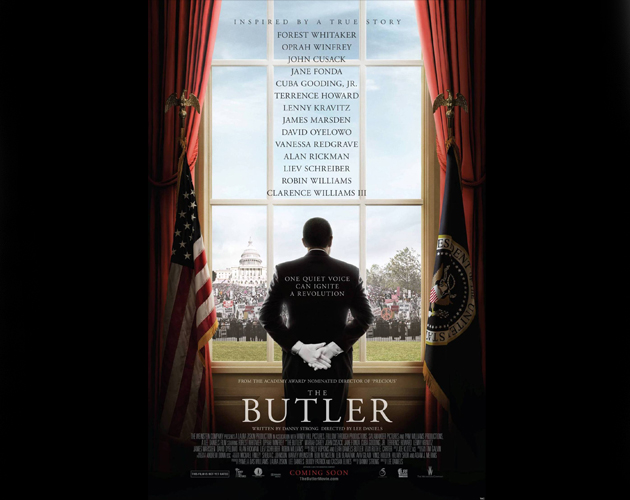 Choice Quote: “The room should feel empty when you’re in it. You hear nothing. You see nothing. You only serve.”

What’s it about?: American racial upheaval – political, social, economic – throughout the mid-20th century as seen through the eyes and experiences of Cecil Gaines (Whitaker), a one-time cotton field worker who winds up as a server in the White House, working his way up to the position of head butler over the course of a 34 year career (and eight presidential terms). Based on an article about the life of former White House head butler Eugene Allen.

The good: Stacking a film with Hollywood star power is no guarantee it’ll earn money or praise (see: Movie 43). But with the right folks in the right roles hitting the right notes, you might just strike gold. Enter Lee Daniels’ The Butler – a fascinating, historic, and original story told by a talented director and brought to life by a stellar cast. Take note, Hollywood. You can make movies without re-hashing the same tired plots, or resorting to sub-par “remakes” of classic films or TV shows in no need of remaking in the first place (just ask The Lone Ranger).

Forest Whitaker earns every bit of Oscar buzz he’s already got, portraying the genteel, honest, hard working, and often conflicted Cecil Gaines from a youth all the way into his 80s. Oprah holds her own as Cecil’s wife Gloria, but the conflict of ideologies between Cecil – who grows up working in the Georgia cotton fields – and their eldest son Louis (the compelling Oyelowo), who becomes heavily involved in the Civil Rights movement, is the spark that ignites this film.

The contrast of watching Cecil serve the tuxedo and bowtie crowd in the White House while Louis is beaten during a rally, or tossed in jail, is rattling, especially considering Cecil’s observation decades earlier that, “Any white man could kill (a black person) at any time and not be punished for it. The law was against us.” It’s a sentiment that still resonates today in parts of post-Trayvon Martin America.

The interspersing of real news footage of civil rights protests adds to the intensity, and tracking the timeline of the movement through the succession of presidents, and, consequently, the tone of the country at the time, is an effective narrative device.

The supporting cast in this film is top notch, highlighted by a reminder of how much fun watching Cuba Gooding Jr. act can be. As well, Lenny Kravitz isn’t too shabby in his first major acting gig.

The depiction of the various presidents Cecil serves varies in quality. Williams, as Eisenhower, is barely in the film long enough to make a dent, while Marsden as Kennedy is unquestionably the best of the bunch (Rickman’s Reagan is a close second). As well, Jane Fonda as Nancy Reagan is a bit of a stretch, but she makes it work.

Daniels, who helmed the Oscar-nominated Precious, manages to make a raw film without diluting the message, an emotional film without beating you over the head with sentiment, and a recounting of the American civil rights movement that plays out about as real as you’ll find in Hollywood.

The bad: While the portrayal of most of the presidents in this film falls somewhere between celebrating and condemning them, Nixon (Cusack) and Johnson (Schreiber) border on parody. The former bursts into the film, sweat rag in hand, perspiring profusely while tossing campaign buttons around like candy. LBJ, meanwhile, sits constipated on the toilet, barking orders to underlings with the door cracked open.

The ugly: From a filmmaking standpoint, no ugly.

Verdict: Give Forest his Oscar nomination (and perhaps one to Daniels as well). Give this film a few hours of your time. Neither will disappoint.

Can I bring my kinds and grandkids to see it?: The violence and racism are intense. If they’re old enough to handle that, give them a primer about what the Civil Rights movement was and bring them along.

Overall Popcorn Rating: 4 kernels out of 5