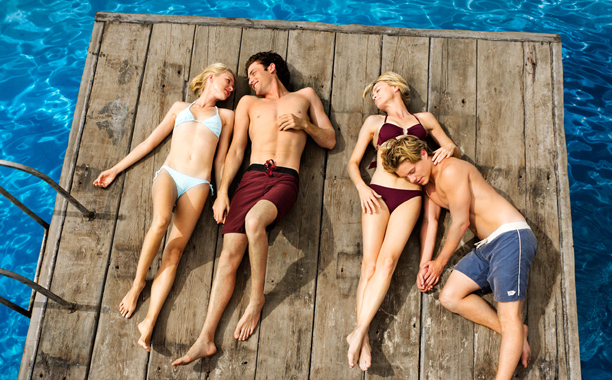 Choice Quote “Time flies. We may have been prettier then, but I think we have much more character now.”

The Hype Based on the story The Grandmothers by Doris Lessing, Lil (Watts) and Roz (Wright), best friends since childhood, are in their 40s and live side by side along the Australian coast. Lil, a widow, and Roz, whose husband recently took a job in far-away Sydney, gradually fall for each other’s sons, embarking on steamy, sexy romps that threaten to divide both loyalties … and families.

The Reality Well, here’s to you, Mrs. Robinson. Aren’t Lil and Roz naughty? The premise – two best friends knocking boots with each other’s kids – seems a little creepy on the surface, but who are we to judge? After all, the couplings are less Woody Allen/Soon-Yi and more Demi/Ashton.

An amazing thing about Adore is that the creep factor doesn’t last. Well, actually, you kind of get used to it, and then sympathize and then at the end of the film … well, you’ll see. And you should see.

Watts and Wright manage to establish a comfortable balance between lust and love, the matriarchal and the mating, their love for their sons and, well, their “love” for their sons because, you see, this film isn’t just about what happens under the covers.

It’s about companionship and the roadblocks intergenerational couples face. Roz warns Lil’s son Ian (Samuel) at one point that she’ll soon grow older and he’ll lose interest. And there are other times when the ladies agree they need to let the boys explore their options with women their own age. But it’s the boys who want to stay as much as the women – Lil and Roz are, after all, smart, successful and stunning – in a show of will that would make Oedipus proud.

The relationships get complicated when break-ups, new loves and old passions come into play, but the story isn’t as simple as it seems and, by the final shot of the film, you’re not sure if that’s a fuzzy feeling or a chill you feel on your spine. It’s a testament to the storytelling and a relationship dynamic that’s anything but black and white.

The Verdict There’s no breakout star performances here – though Watts and Wright ably carry the film – and the ladies don’t seem to age much despite the story spanning three generations, but Adore stands as a smartly crafted, engaging film that manages to maintain an air of realism while tackling a provocative – even taboo – intergenerational love story.

Theatres or rent it? Theatres

Can the grandkids watch? As long as you’re sure they won’t start giving you suspicious looks any time your friends’ kids come around.