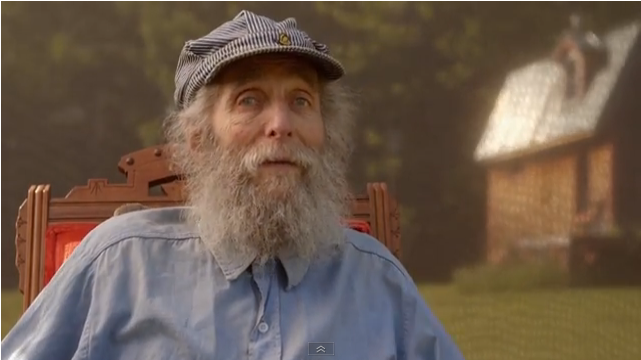 Choice Quote: “My life has been evolutionary rather than revolutionary…Things just took one day at a time, and everything worked out.”

The Hype: The true story of the man behind Burt’s Bees, the iconic all-natural honey brand and related products, who grew up in Manhattan, escaped to the backwoods of Maine, started with a single hive of bees, and ended up a globally-recognized face.

The Reality: You can’t help but love Burt. Well, perhaps unless you’re his former partner Roxanne. But more on that later.

Burt’s Buzz is an intimate, funny, endearing, and honest portrait of a 76-year-old man who wants nothing more than to sit in his 400 square foot cabin in the backwoods of Maine (no electricity or hot water by the way), tend to his bees, cuddle with his beloved golden retriever, and let the 21st century world pass on by.

“As a celebrity, wherever I go I’m contractually obligated not to say ‘buzz off!’” Burt jokes while preparing to travel to Minnesota to promote Burt’s Bees lip balm at a local Target. He doesn’t understand why he’s famous, nor does he really care.

The more you get to know Burt the more you want to know him – this man who left a burgeoning career photographing the likes of JFK and Malcolm X in his hometown of Manhattan to escape to the woods “like a high class hobo,” cut off his family, live off the land and, fortuitously, come across a cluster of bees on a fence post by chance.

“It was an act of God,” that Burt found those bees, he says, and along with a hive a friend gave him months earlier he started selling honey by the side of the road — where customers sometimes had to shake the car to wake a slumbering Burt inside.  “There was no company. I was the company. The bees were the company.”

A hitchhiker he picked up one day – Roxanne – helped him expand his business, concocting the wax candles and other Burt’s products before going global. The story of their split, both romantically and in business – where she became a multi-millionaire and he was forced out of his own company that bore his likeness, is somewhat one-sided given Roxanne does not appear in the film except in old clips from an NBC show. Still, you get the clear impression that Burt got burned, and he hasn’t ever truly gotten over it.

Still, as Trevor says, Burt “lives in a hoard of his own peculiarities.” His quirky life, eccentricities, and insistence on surviving off the land may seem strange to us, but it’s really just a throwback to the mentality of a pioneer era, from which Burt is something of a historical holdover.

One of the funniest parts of the film is seeing Burt’s brother, also from Manhattan, interviewed from his new home in England. His beard is well-trimmed, his clothes neat, and his accent, somehow, inexplicably English (he caught whatever linguistic affliction Madonna has I suppose).

He’s a stark contrast to Burt, who wants nothing to do with his celebrity but, through an equity deal with the corporation that now owns Burt’s Bees, does personal appearances and product launches. Still, fame hasn’t changed his attitudes on life, and there’s something we could probably all learn from the bearded bee-man who lives in the shack in the woods.

“Nature doesn’t wait for you to see what she’s doing,” he says. “There’s a seasonality to everything.”

The Verdict: Loved it. The film goes a bit longer than it probably needs to, but it’s a wonderfully humble portrait of an endlessly intriguing character. Definitely one not to miss.

Can the grandkids watch?: Absolutely.