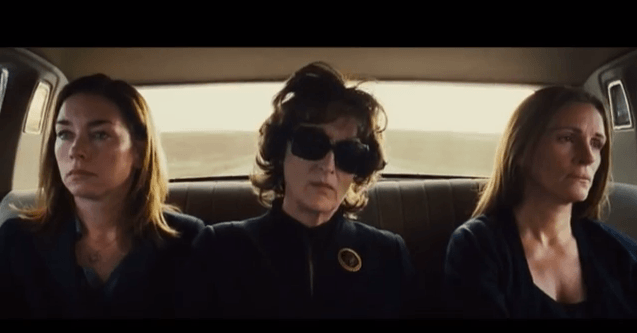 Choice Quote: “Thank God we can’t tell the future or we’d never get out of bed.”

The Hype: A dysfunctional family reunion (and I mean dysfunctional with a capital “D”) following the death of its patriarch, plus the news that the pill-popping matriarch is afflicted with cancer. Adapted from the Pulitzer Prize-winning play by Tracy Letts, and boasting an all-star cast.

The Reality: It’s abundantly clear that, even when paired with some of the best actors Hollywood has to offer, Meryl Streep shines above and beyond the rest. That’s not at all a knock on this cast. They’re fantastic in this film. But Streep is Streep. What else can you say?

Letts’ tale is a simmering brew of secrets, anger management issues, and unresolved conflicts that comes to a boil when the Weston family rallies around mom Violet (Streep) following the suicide of her husband Beverly (Shepard).

To go through the entire cast and rate their aptitude in this film is redundant. They’re all wonderful at what they do here. I don’t think I’ve ever seen Chris Cooper in a film where he didn’t completely embody his character while Roberts, despite flashes of overacting, proves once again she’s not to be lumped into the rom-com darling category. She more than holds her own when pitted head-to-head with Streep.

Speaking of Meryl: perhaps she should prepare a spot on her Oscar shelf. Let’s be honest – Streep, in this film, as the over-bearing, pill-addicted, cancer-suffering matriarch proves the difference between a very good actor (say, Roberts), and a great actor. This isn’t to trash Roberts or gush incessantly over Streep – it’s simply like watching Mark Messier play hockey alongside Wayne Gretzky. He’s very good, but there’s only one Great One.

As for the story, the writing cuts to the point. It’s intelligent, witty, and raw, and no doubt is going to garner some buzz come award season as well. Director John Wells was smart enough to get out of the way, give us a few picturesque shots of the plains of Oklahoma, and let the talent do their thing. And they certainly do.

After meeting this family it’s easier to see why Shepard’s character committed suicide. But by the end of the film you kind of feel bad he didn’t stick around to enjoy the oh-so-remarkable fallout.

The Verdict: See the movie so you know what everyone’s talking about on Oscar night.

Can the grandkids watch?: If they’re old enough to follow the story.