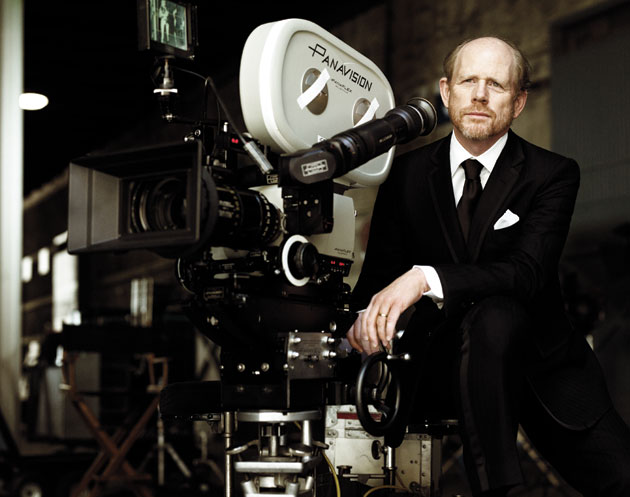 For decades, Ron Howard has been entertaining us. As his new film, Rush, roars into theatres, he discusses what keeps driving him.

Depending on when you came of age, you either first saw Ron Howard in black and white as Opie in The Andy Griffith Show (1960-68) or in colour as Richie Cunningham in Happy Days (1974-84) – or if you’re really young (and are reading your parents’ or grandparents’ magazine), you probably first heard about him from his voice-over work on Arrested Development. But no matter which generation you fall into, chances are you’re a fan of one of the more than 20 movies that the Academy Award-winning director has made.

Still sounding like the fresh-faced teenager he played on Happy Days, Howard, now 59, spoke to me on the phone from London, England, where he was doing press for his latest film, Rush, during British Grand Prix weekend. Which is no coincidence given that Rush tells the story of 1970s Formula 1 racing legends, Austrian Niki Lauda and Englishman James Hunt.

For those of you who aren’t F1 fans, Lauda and Hunt had one of sports’ greatest rivalries that culminated in the 1976 battle to win the world championship. Lauda was almost killed in a crash during a race that shouldn’t have taken place, but his miraculous recovery had him sitting behind the wheel 40 days later to keep his battle with Hunt raging. Of course, for what happens next, well, you’ll have to see the movie. I have and, as a film, it is pure cinematic magic.

Howard has long shown an affinity for gripping true stories about men and their passions – Apollo 13, Frost/Nixon, A Beautiful Mind (which netted him that Oscar) and now Rush.  “I tend to be drawn to stories about teams or family units. I’m interested in how people pull together to try and do something,” he explains. “What was interesting about this story is that these are two individuals in a lone wolf world, they have teams, etc., but at end of the day, they are ultimately not reliant on the team. That appealed to me, and I wanted to get to the heartbeat of that.”

As to the true story part of the equation, Howard relayed a story about the test screenings for 1995’s Apollo 13, where the only negative response was from a young audience member who hated the ending. He wrote in the review card, “Terrible. More Hollywood bullshit. They would never survive.” It was obvious to Howard (and everyone else) that the viewer didn’t know that the film was based on an actual historic event. “And I realized that’s one of the great things about doing a true story: fact is stranger than fiction and it’s great to push the cinematic potential of the medium dramatically and have a licence to do it. And Rush is another of those stories, that if it hadn’t of happened, I don’t think you would have gotten away with letting the narrative unfold the way it does.”

The story is compelling, but it’s the 1970s setting with the wardrobe, sets and attitudes of the time that also brings the movie to life. The film looks like it was actually made in the era, and that is something that Howard and his crew went to great lengths to do by shooting with camera lenses used on 1972’s The Godfather as well as a special Canon telephoto lens from the ’70s that was used to film actual F1 races.

“We knew we were using archival footage in some instances and we did a Forrest Gump, where we put Lauda’s car or Hunt’s car into a piece of archival footage that was great but wasn’t from one of our heroes’ races,” he says. “So we used every contemporary cinematic tool at our disposal to try to make it as seamless as possible. The 99 per cent we were creating could stand along the one per cent archival footage. And that did inform the esthetic of the film.”

Howard came into the project thanks to screenwriter-producer Peter Morgan, a man who is no stranger to bringing true stories to cinematic life (the Oscar-winning The Queen and The Last King of Scotland, about the demise of Idi Amin), and the two men had worked together on the Oscar-nominated Frost/Nixon. Morgan approached Howard with the script, and he signed on quickly after reading.

“I knew others filmmakers would grab it and I thought it was fresh and exciting and it featured acting opportunities which is something that I always look for as a performance director,” says Howard. “I thought it was Christmas when I read it.”

While James Hunt died suddenly at the age of 45, Niki Lauda, now 64, gave his blessing to the project and spent time with Peter Morgan, being interviewed and discussing the course of events before the screenwriting began, then he stepped aside and allowed Morgan and Howard the freedom to do what was needed.

Of course, making a film about two intense men requires equally intense performances. And actors Daniel Brühl (Inglourious Basterds) and Chris Hemsworth (Thor) don’t disappoint. In fact, Hemsworth, an Australian who up until now was known more for his brawn than bravura is a revelation. “When we got to casting Hunt we were a little frightened as there were only a handful that we’d consider and that we thought would be right,” says Howard. He explains that on the list but down a ways was Hemsworth. Howard, however, had only seen him in Thor and his first Hollywood role as Captain Kirk’s father in 2009’s Star Trek reboot.

Then Hemsworth sent in an audition tape that he made himself from his dressing room on the Avengers set, and it impressed. “He is a surfer. He had the bone structure and height of Hunt but he also had that California surfer vibe that James had that was uncharacteristically cool in England at that time. It was as much Steve McQueen as it was anything else,” explains Howard. “Chris showed he had the chops. Then I called Kenneth Branagh, who directed Thor, and he raved about him.”

As the interview concludes, it is clear that Howard’s energy and enthusiasm for his work is boundless. He has a new movie, In the Heart of the Sea, set to start filming in September, as he also finishes post-production on the documentary Jay-Z: Made in America. I ask him how aging has affected his work. “I’m busy and I care and I want to fulfill the possibilities of the projects but I think that perspective [that comes with age] is allowing me a little more of a chance to appreciate it and smell the roses moment to moment as I go,” he explains. “And there’s something gratifying about that. But I still am on pins and needles whenever it comes time to share the work with audiences. So between now and September, I’ll be thinking a lot about Rush.”

Catching Up With…Donny Most From ‘Happy Days’

Catching Up With … Marion Ross from ‘Happy Days’