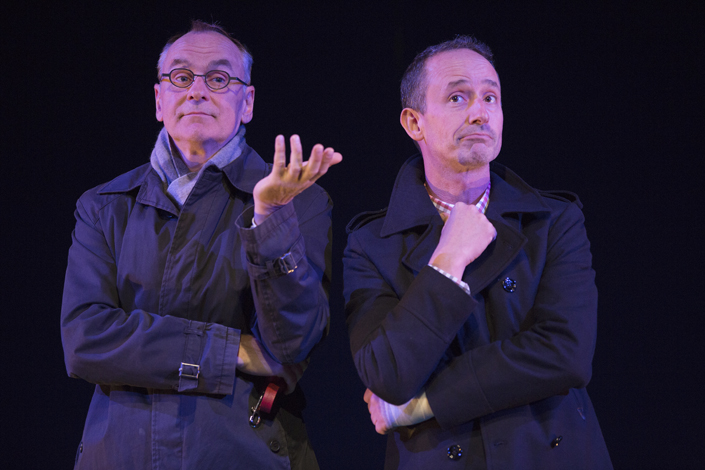 Sibling rivalries, a matriarch who gets squashed at a Gay Pride Parade and, of course, one doted-on dog  – they all come together in The Best Brothers, the latest offering from celebrated Canadian playwright Daniel MacIvor. A 2012 Stratford summer hit, the play opened last night at the Tarragon Theatre in Toronto.

Along with writing the show, MacIvor, 51, stars alongside fellow Maritimer John Beale (“a beautiful actor – it’s so much fun to work with him”). I recently spoke with the incredibly personable playwright about the pooch who helped inspire the play, his artistic insecurities, his vision for the future of community theatre, and the most touching compliment an audience member ever paid him.

MIKE CRISOLAGO: The idea for this show grew, in part, from you becoming a first time  dog owner a few years ago.

DANIEL MACIVOR: I was working with my dramaturge and I would come in every day with my stories – the trauma of dog ownership for someone who’s never had a dog before – and she kept making notes of things that I’d say. And then I had a meeting with Stratford and they (asked) if I had anything that might work for them and I said no. And (the dramaturge) said, “Yeah, the show about the dog.” So it really started off as a show for John Beale and I to do and the dog kind of nosed his way in.

MC: Now when you read the reviews, everybody’s talking about the dog.

MC: How did your own experiences with sibling rivalries figure into the script?

DM: I have two brothers and two sisters but they’re all older than I am. Early on I would watch from a slight distance the way they interacted. And I had a brother who was in management and a brother who was a union guy, so that’s always been something that’s really interested me – especially the two brothers who just made different choices in life and have different lifestyles.

MC: You’ve received a lot of praise over the years for your work in theatre and film. What’s a compliment or comment that’s stuck with you?

DM: I think the compliment that most touched me was from an audience member.  They came up to me somewhere and said, “I don’t remember what (the show) was about, and I don’t remember what you said, but I remember how I felt.” And I feel like that is sort of the center of what it is that we do.

MC: A lot of your theatrical work is produced at local theatres and smaller venues. Tell me about your vision of theatre as it pertains to serving the communities in which they’re located.

DM: I think that where theatre will thrive in the future is when we get to a place where we have an audience who’s actually supporting the theatre by box office. The only way we’re going to be able to do that is to create a theatre that speaks to the people who come, specifically. Like, they know this particular theatre is going to do this kind of a play. What happens with these subscription theatres is they’re trying to please everybody and so…they do a broad range of plays so that they can sell as many subscriptions as possible.

Halifax is a pretty good example where the subscription theatre, Neptune, does not support the local community fully — it’s not doing a lot of new work. So you see little companies popping up in storefronts that are doing things that remind me of (the 1990s) in Toronto when, basically, if you had a play, you had a theatre company. When we were young and doing the work we weren’t thinking about our careers. We were thinking about the show we were doing. There was no chance we were going to get picked up by the Mirvishes. It seems like everything’s an audition now for the next level…The Drowsy Chaperone kind of started all that – you can make a show for your friend’s wedding party, and go to the Fringe [Festival] and end up in New York. I’m not saying that it’s a bad thing but I think…that when we start throwing ourselves into careerism and into where the show might take us, we’re getting out of the moment, and we’re not present with the audience in the way that I think theatre works best.

MC: As you noted, you’ve been involved in Canadian theatre for more than two decades. How has your creative process changed or evolved?

DM: Sometimes I don’t take a certain road because I feel like I’ve done that before. And it’s not because I’m not interested in doing it. It’s just that I don’t want to be perceived as repeating myself. So I’m pushing myself a little bit not be afraid of that.

My lifestyle’s changed a lot [too]. I used to be a big drinker and when I stopped that actually shifted a little bit in my focus. I’m out in the country, I’m out in the woods here (in Nova Scotia). I’m 51-years-old, I can’t party full out and function full out [Laughs]. So, you make adjustments. But I think for me an ongoing thing is trying really not to give a fuck about what people say.

MC: What do you hope people take with them from The Best Brothers?

DM: The feeling like, “I want to see it again – there’s more to be gleaned from it based on my experience of it.” And, I guess, the other thing with this play, particularly, for some weird reason the work that I do, when I look back on it, there is always this sense of the demystification of death. And that’s very much a part of [The Best Brothers]…and I guess that’s something I’m always sort of contending with and maybe, in some way, trying to help some people have a conversation about that.

For more information, or to purchase tickets for The Best Brothers, click here.