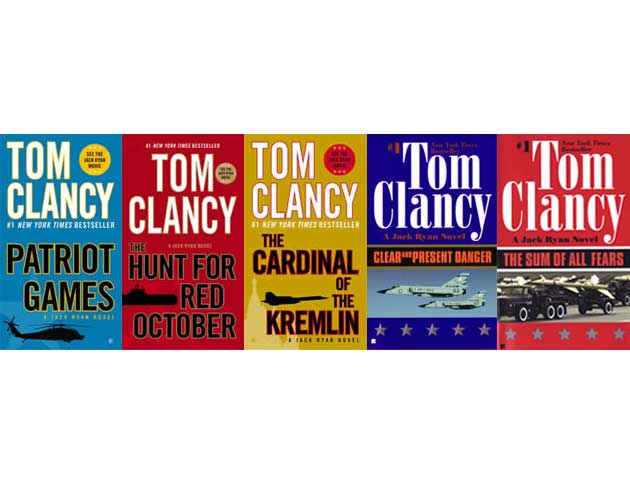 The world lost one of its great commercial authors on Tuesday, with the passing of Tom Clancy at age 66. His Jack Ryan novels, a series of books that helped create the techno-thriller genre, were all colossal bestsellers back in the waning days of the Cold War – and many of his titles also went on to become blockbuster films and video game franchises. Whether you’re new to Clancy’s work or a longtime fan looking to honour the writer’s memory with a re-read, here’s where you start. (It should be noted that the list here is in order of series continuity, not of publication date.)

1. Patriot Games, though published later, is the first Jack Ryan novel with respect to timeline. It’s the early 1980s, and after saving the Prince and Princess of Wales from an attack by the Ulster Liberation Army, Ryan and his family become targets of the Irish terrorist group themselves. A relatively small-scale intimate thriller (at least in comparison to some of Clancy’s later works), Patriot Games establishes Jack Ryan as the character readers would come to know and love.

2. The Hunt for Red October is the one that started it all. First published by a small press for a tiny advance, The Hunt for Red October drew a very vocal fan in President Ronald Reagan. Almost overnight, Clancy, a former insurance salesman, became one of the most widely read authors in the world. The story is a familiar one – a Soviet submarine captain goes rogue, and it’s up to CIA analyst Ryan, who suspects a defection attempt, to prevent a third world war from developing — but reading the novel is to put yourself in the hands of a master storyteller.

3. The Cardinal of the Kremlin is the last of the relatively small-scale Ryan books and the final novel set during the Cold War. It finds Ryan in Moscow, working against time in a plot that involves another defection, linked to the development of a space-based weapons system.

4. In Clear and Present Danger The threats at home in the U.S. heat up, and Ryan finds himself moving up the CIA ranks in a novel that focuses on U.S. intercession in the drug trade, political conspiracies and treasonous acts that extend deep into the American political system.

5. The Sum of All Fears finds Ryan high up the ranks of the CIA, faced with rivalries and grudges that have developed over the past couple of novels. The imminent threat is an errant nuclear warhead in the hands of a terrorist organization, but the Byzantine machinations of power within the U.S. government are equally as nerve-wracking and fraught with peril.

There are, of course, dozens of other Tom Clancy books (17 titles made the New York Times bestseller list) and a number of other titles in the Jack Ryan series, but these five titles are the core of Clancy’s work and a perfect introduction – or reminder – of a masterful fiction writer who has left us too soon.