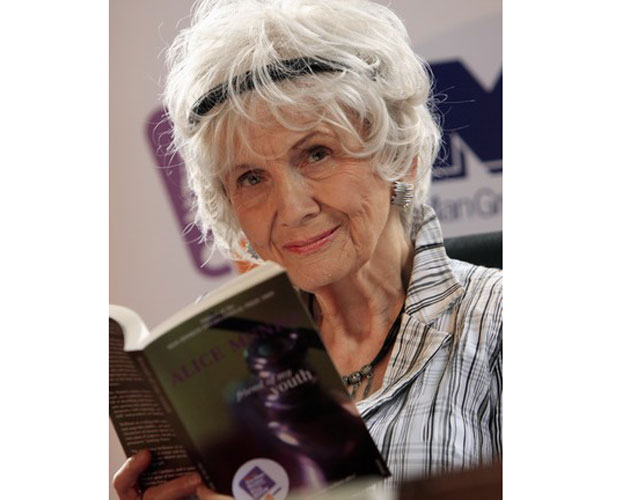 Sometimes folks just get it right. Canada awoke to the news today that our grand dame of letters, Alice Munro, has won the country’s first Nobel Prize for Literature. With her typical grace and aplomb, Alice Munro turned the focus from her own writing to the that of her fellow writers.

“I am amazed and very grateful,” she said. “I’m particularly glad that winning this award will please so many Canadians. I’m happy, too, that this will bring more attention to Canadian writing.”

While the 82-year-old is the first Canadian-based writer to win, she is also only the 13th woman to receive the award.

The response on Twitter was immediate and celebratory. Sarah Polley, who adapted Munro’s short story The Bear Came Over the Mountain into the award-winning movie Away from Her, tweeted: “Oh, it is a lovely thing when people who don’t seek recognition get it anyway. #NobelPrize #alicemunro”

In recent years, her name has been a favourite for the prize, with British-based betting company Ladbrokes positioning her as the second-most likely recipient this year behind Japanese writer Haruki Murakami.

Her long-time Canadian editor and friend, Doug Gibson, said: “Her lifetime of work has produced Canada’s first Nobel Prize for Literature, and we should all celebrate.”

Dear Life, her latest collection of short stories, published last fall by McClelland & Stewart, will be coming out in paperback this week. She is the author of 16 books, including Too Much Happiness, The View from Castle Rock, Runaway, The Progress of Love, and Lives of Girls and Women. Along with this Nobel Prize, she is the recipient of awards too numerous to count, including three Governor General’s Literary Awards and two Giller Prizes, the National Book Critics Circle Award and the PEN/Malamud Award in the U.S.

Munro was also the first Canadian to win the prestigious Man Booker International Prize for Lifetime Achievement. Her stories have appeared in The New Yorker, The Atlantic and The Paris Review, and her collections have been translated into thirteen languages.

“We are overwhelmed with pride and excitement,” says McClelland & Stewart Publisher Ellen Seligman.  “A momentous day for Canada and Canadian writing, and a thrilling honour in recognition of the extraordinary and enduring talent of Alice Munro, one of the great writers of our time.”

“This is so surprising and wonderful. I am dazed by all the attention and affection that has been coming my way this morning.  It is such an honour to receive this wonderful recognition from the Nobel Committee and I send them my thanks.

When I began writing there was a very small community of Canadian writers and little attention was paid by the world. Now Canadian writers are read, admired and respected around the globe.  I’m so thrilled to be chosen as this year’s Nobel Prize for Literature recipient. I hope it fosters further interest in all Canadian writers. I also hope that this brings further recognition to the short story form.”