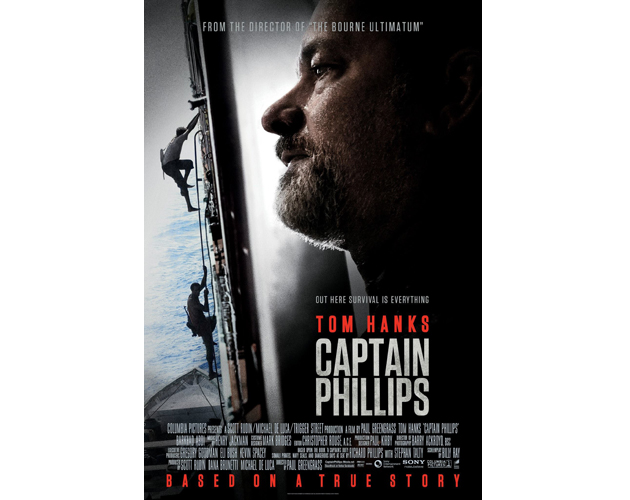 The Hype: The real-life tale of the 2009 hijacking of American transport ship Maersk Alabama by Somali pirates, and the subsequent hostage taking of captain Richard Phillips.

The Reality: Reviews of Tom Hanks’ films, like Meryl Streep’s, tend to border on cliché because he’s always just so darn brilliant in them. Case in point: I could sit here and tell you that Tom Hanks is fantastic in this movie, that his portrayal of the heroic title character is captivating on many emotional levels, that he manages to make you cheer, cringe, and tear up seemingly at will. But you’ve heard it all before. He’s a two-time Oscar winner and the O-word is being batted around again here (though I will say I think Chiwetel Ejiofor earned the statuette for his lead role in 12 Years a Slave, Hanks definitely deserves a nomination).

So, lets just accept the fact that, in Captain Phillips, Hanks is as great as he always is, and move forward. The film is a brilliant portrayal of this hijacking-turned-hostage scenario, propelled by Greengrass’ ability to direct snatch your nerves in his hand and play them like an instrument, resulting in a gripping tune filled with tension, heartbreak, joy, terror, and everything in between.

Captain Phillips’ hesitation about piloting a container ship through the dangerous waters off the Somali coast are well-founded, as piracy is rampant. His crew doesn’t seem to worry much, not taking safety drills too seriously until the situation turns all too real.

Part of the beauty of the film is that the band of pirates, led by an ominous-looking young fisherman named Muse (Barkhad Abdi – another brilliant performance that’s going to have the O-word attached to it), get a backstory as well: American and international ships fish their waters dry, so the local fisherman have to resort to pirating the passing cargo ship to survive and appease the money-hungry warlords perennially dangling the guillotine blade above their heads. When the hijacking goes wrong, the pirates take the captain hostage in an effort to squeeze some profit from the venture, and the American Navy Seals race to save him before the pirates deliver him to their boss.

Captain Phillips, who worries about how his family and kids will fare both financially and professionally in an increasingly competitive world, and pirate captain Muse, are like two sides of the same coin. They hail from opposite ends of the world, and have very different intentions, but they’re also both made uneasy by their missions, leading men who rely on them toward an uncertain outcome, and propelled by pressures – both societal and professional – that weigh on them like anchors.

The one major failing of this film is that the plight of the pirates – the fish in their waters being wiped out and the warlords that oppress them – isn’t fleshed out or explored more. When Muse explains the situation to Captain Phillips, the captain brushes it off by telling him there are other things they can do besides fish in the same dismissive tone someone may use when scoffing at a homeless person to “Get a job.” The issue, sadly, isn’t brought up again.

Aside from that, the film is a fascinating look at how one clever crew thwarted a terrifying hijacking, and the tension-filled scenario that ensued, all propelled by a compelling cast – especially newcomer Abdi. And, well, Tom Hanks. But you already knew that.

Can the grandkids watch?: The tension looms large, and there’s violence, so if you think they’re old enough to handle to the guns and life or death situations, go for it.