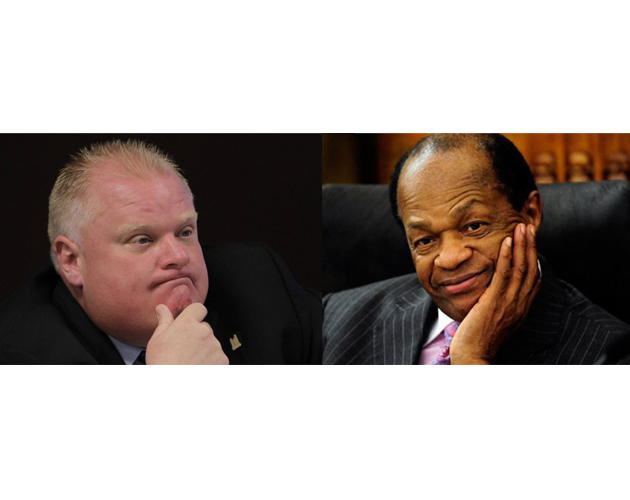 If you think Toronto Mayor Rob Ford’s crack scandal is crazy, imagine living through the Marion Barry eras in Washington, D.C. In January 1990, during his first run as Washington’s mayor, Barry was famously videotaped smoking crack cocaine with an ex-girlfriend and busted by the FBI. He lost his mayoral seat and served six months in jail, only to return to city politics where he was RE-ELECTED mayor in 1994. Barry subsequently earned the nickname “Mayor for Life” and, at 77, still serves on city council.

Not only do Marion Barry and Rob Ford have the crack cocaine addiction in common (some say Ford may want to take a page from Barry’s book about how to rehab both yourself and your image), they both also have a penchant for offering up truly “unique” sound bytes. Below are seven quotable comparisons of Ford and Barry. Let us know who you think said it better.

On improving their city …

Rob Ford: “We’re going to put an end to the gravy train.”

Marion Barry: “I promise you a police car on every sidewalk.”

On looking on the bright side …

Rob Ford: I believe, when it comes to my fiscal policy, I’m by far the best mayor the city has ever had.

Marion Barry: If you take out the killings, Washington actually has a very, very low crime rate.

Rob Ford: Yes, I’ve smoked crack cocaine! Am I (an) addict? No. Have I tried it? Probably in one of my drunken stupors.

Rob Ford: I’m not surprised. It’s just like saying Adam Vaughan or (Gord) Perks or (Janet) Davis or (Paula) Fletcher is not voting with me. These people are all two steps left of Joe Stalin.

Marion Barry: The laws in this city are clearly racist. All laws are racist. The law of gravity is racist.

On admitting they aren’t perfect …

Rob Ford: I’m the first one to admit I am not perfect. I have made mistakes … I shouldn’t have got hammered down at the Danforth. If you’re going to have a couple drinks, you stay home, and that’s it. You don’t make a public spectacle of yourself.

Rob Ford: (On the crack cocaine scandal) I wasn’t lying. You didn’t ask the correct questions. No, I’m not an addict and, no, I do not do drugs.

Marion Barry: (After not filing his tax returns) “I was just distracted, frankly.”

On friends in low places …

Rob Ford: If I did something illegal, then arrest me.

Marion Barry: There is a sort of an unwritten code in Washington among the underworld and the hustlers and these other guys that I am their friend.