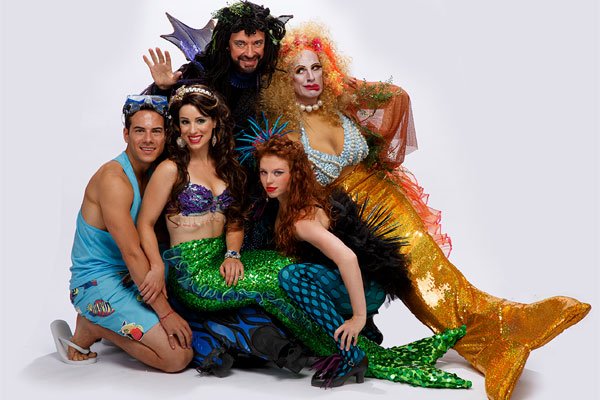 Like eggnog in your grocer’s freezer, or Santa’s bells jingling throughout a crowded mall, a Ross Petty production touching down in Toronto can only mean one thing: the holidays are just around the corner. And like the jolly bearded man in red, Petty almost always delivers the goods.

This year is no different, with a Hog Town-themed version of The Little Mermaid dazzling audiences at the Elgin Theatre.

If you’re familiar with Petty’s productions, you’ll know what to expect – lots of camp, laughs, toe-tapping tunes, and plenty of audience interaction (there’s something hilarious about Petty taking the stage as the villain, the kids all booing him, and then him yelling “Shut up!” right back).

I brought my four-year-old niece to see the show, and her initial disappointment that this wasn’t the Disney version of the tale – which means no Ariel, Sebastian, or Ursula the Sea Witch – quickly evaporated. She had a blast, as did the other children sitting in our area, while the adults laughed at the one-liners that went over the kids’ heads.

The story takes place in Toronto harbour, where the Little Mermaid, Angel, and her fishy friends are growing increasingly concerned with pesky human polluters. If that weren’t bad enough, the evil sea wizard Ogopogo, played by Petty (a rare villainous role that doesn’t see him dressed in drag), hatches a dastardly scheme to build a casino and entertainment complex in the middle of the harbour (sound familiar?) where he’ll force Angel and her friends to perform.

The script, written by cast member Reid Janisse, follows in true form Petty’s brand of clever, topical comedy that doesn’t take itself too seriously. The players poke fun at themselves, and even at Petty, while local touches like “Mel Lastman for Mayor” signs littering the bottom of the lake will keep you chuckling.

The cast is fantastic, led by Chilina Kennedy, who stars as Angel, a heroine who, refreshingly, doesn’t need a man to stick up for her. She’s as strong-willed as they come while packing a voice that completely captures the room — invaluable considering the show’s main flaw is that the songs themselves aren’t as catchy as last year’s Snow White show. In a twist, it’s not Petty but Dan Chameroy who dons a wig and body suit to play the comically flamboyant Aunt Plumbum, while Eddie Glenn – a multi-year veteran of Petty’s shows – proves a fan favourite as Sponge Bill Triangle Pants.

Still, as in past years, it’s the talent of the ensemble as a whole that makes this show a success. Reviews have been glowing so, if you’ve never seen a Ross Petty Production, give The Little Mermaid a chance. Like the holiday window displays in The Bay department store just down the street, Petty’s shows are a bona fide seasonal tradition. And there’s a reason people come out every year to see them.

The Little Mermaid is on at the Elgin Theatre until January 4. For ticket information, click here.