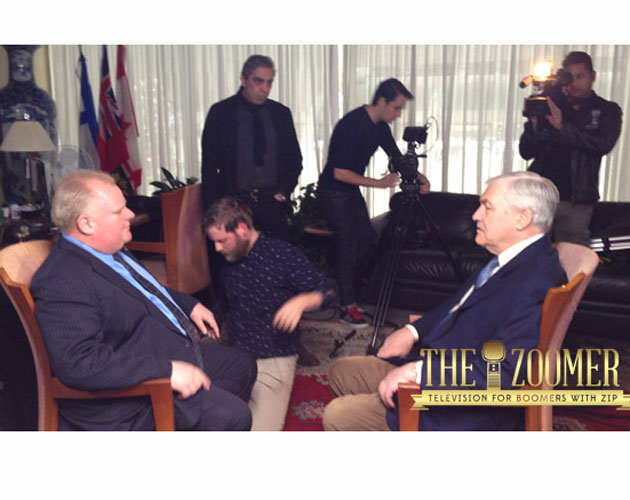 Conrad Black and Rob Ford – separately, they attract a level of media attention most Canadian personalities could only imagine. Together, thanks to an exclusive interview that sees Black sit down to chat with the embattled Toronto mayor, they’ve got the media buzzing before they’ve even said a word. In advance of Black’s interview with Ford on theZoomer (a ZoomerMedia property), airing tonight at 9 p.m. on Vision TV, we’ve compiled a list of 10 things we hope to see happen during their exchange. – Tianna Robinson and Mike Crisolago

1. Ford asks Conrad Black what it’s like to be a guest of a federal institution.

2. Do said institutions have football teams he can coach?

3. The emergence of a new Rob Ford drinking game: you take a shot every time one of Ford’s aides have to explain Black’s extensive vocabulary to the mayor. The game continues until you’re in a solid drunken stupor.

4. Knowing of Black’s tenure in the British House of Lords, Ford mistakenly refers to Black as “Your Highness.”

5. Knowing of Ford’s dalliances with drugs, Black refers to Ford as “Your high-ness.”

6. Black, a former media baron and no stranger to newspaper scrums, offers Ford advice on how to avoid this:

8. Black offers Ford some financial advice: “Cutting back on excessive spending is fine, but splurging on ties that aren’t emblazoned with the logos of discontinued or controversial NFL teams is okay.”

10. Black gives Ford tips on how to more effectively address the public. For example, instead of being in a “drunken stupor” admit to an “intoxicated somnolence.” Instead of calling the media “maggots,” they’re “priggish, gullible fools.” And instead of incessantly harping on about the “gravy train,” just shut up.