Popcorn Picks: The Hobbit: The Desolation of Smaug 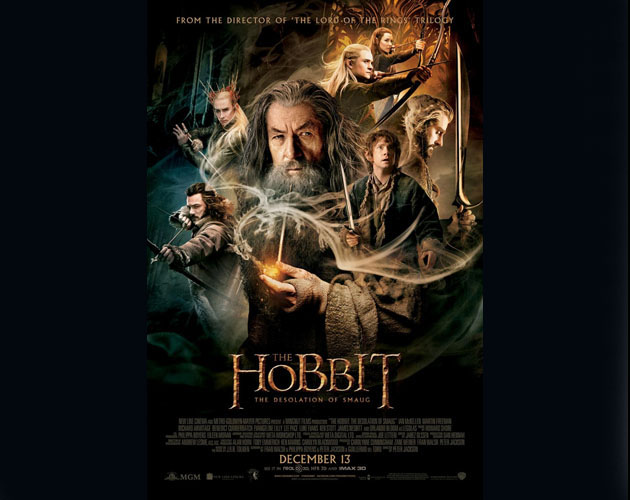 Choice Quote: “We’ve been blind…and in our blindness our enemy has returned.”

The Hype: Enter the dragon – Smaug that is, the fire-breathing monster who charred a once proud dwarf kingdom and now nestles among its riches. The second in Peter Jackson’s Hobbit trilogy, The Desolation of Smaug (TDOS) picks up pretty much where the first one left off, with hobbit Bilbo Baggins (Freeman), dwarf warrior-prince Thorin Oakenshield (Armitage) and his brethren, and the wizard Gandalf (McKellen) navigating treacherous Middle Earth landscapes en route to a confrontation with a beast with a taste for dwarf meat.

The Reality: What an upgrade from the first Hobbit film, which I noted at the time was a lot of “Walk, walk, walk, fight off the bad guys, look over there – a breathtaking landscape – walk some more, fight, gaze across the horizon at your eventual destination. Roll credits.”

This time around, it’s “Run, fight, fall, fight, swim, fight, quick rest…“Hey good looking, how you doing?”, oops got to run, fight, breathe fire, duck, jump, oh no what’s going to happen next, WHAT DO YOU MEAN IT’S OVER???”

TDOS is, in some ways, a concession from Peter Jackson and crew to the charge that there really isn’t enough source material for three films. This easily could have been a brilliant two-part series. Here, Jackson packs in the action surely, in part, because plot-wise not a heck of a lot really happens. They go from point A to B to C without resolving anything, with distractions in between. But it’s these distractions – the fights, the chases, the arrows flying and beasts terrorizing – that thrill. As far as the storyline is concerned, we didn’t come as far as you’d expect to in a near-three hour film. But man, were those three hours fun. Well, unless you’re an orc. They tend to lose their heads in this film. A lot.

Without giving too much away, the second installment of the Hobbit sees Gandalf break away from the pack in an effort to banish the evil Necromancer from Dol Guldur. Meanwhile, Bilbo and friends brave beasts, orcs, elves and giant insects en route to the Lonely Mountain to retrieve the precious Arkenstone from the slumbering Smaug. Let’s just say neither task goes according to plan.

The screening I attended showed the film in 24 frames per second digital 3D, but reports I’ve read from those who’ve seen it in the high film rate of 48 frames per second (the groundbreaking format Jackson introduced with the first film in the series) suggest that the visuals, which agonized viewers the first time around with their fuzziness/awkward look, come off much better here. The fight scenes are creatively choreographed – especially the barrel race along some raging Middle Earth rapids – and the detail on everything from Smaug’s scales to the nasty, giant forest-dwelling spiders is spectacular.

The film also introduces a number of characters to the trilogy – most notably Elven prince Legolas (Bloom), from the Lord of the Rings films, Elf warrior Tauriel (Lilly), who kicks some major butt, the skin-changer Beorn (Mikael Persbrandt) who can morph from man to bear, and Bard the Bowman (Luke Evans), heir to the throne of the fallen kingdom of Dale. Of these only the latter two actually appear in J.R.R. Tolkien’s version of The Hobbit – Legolas is introduced in the LOTR books and Tauriel, sure to be a huge fan favourite, was created by the filmmakers.

Then, of course, there’s our dragon – a nasty looking lizard with a British accent, little to no sense of humour, and a whole lot of pent-up anger. Benedict Cumberbatch voices Smaug brilliantly and, since it’s been about a whole month without a film starring Cumberbatch being released in theatres, it’s nice to see he’s got work again.

The film has a number of fun sequences (and even an early Peter Jackson cameo) but one of the best features Smaug face-to-face with Bilbo, who the dwarfs send into the dragon’s den alone. Don’t bother questioning why the massive, all-powerful, fire-breathing Smaug doesn’t simply gobble up the cowering hobbit when he has the chance. Ignore the logic and go along for the ride. It’s funny, frenzied, and shows how far Bilbo has come from his cranky beginnings in the first film.

But while Smaug terrorizes, there’s an even more powerful villain who reveals himself, prepping audiences for the third film where the much-ballyhooed impending war between light and darkness is sure to hit the battlefield running.

Can the grandkids watch?: Just try to stop them.

The Hobbit: The Desolation of Smaug hits theatres December 13. And see our interview with star Sir Ian McKellan in the current issue of Zoomer magazine.