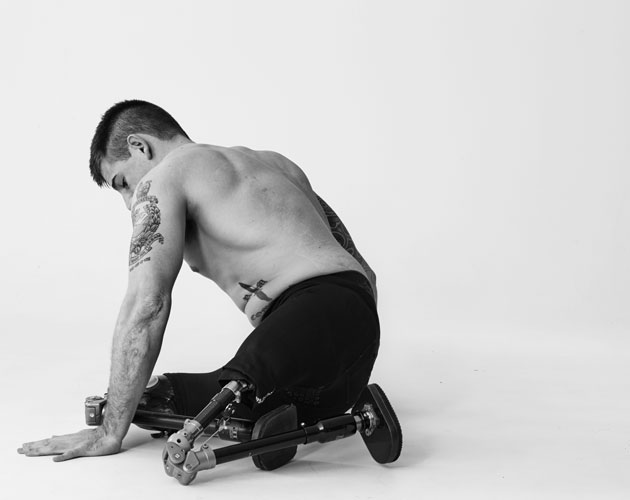 In a new book, Bryan Adams has the cost of war in his lens

For most combatants, the battle really begins following physical or psychological injuries suffered in the theatre of war. Take the subjects of Bryan Adams’ new book, Wounded: The Legacy of War (Steidl), available Nov. 11 at www.amazon.com. British military personnel focused in the rock star’s lens didn’t make it unscathed past training accidents or through tours of duty in Iraq and/or Afghanistan. The book, says Adams, who has moonlighted as an award-winning photographer for a decade now, “gives an insight into the horrific things that happen when we take arms against each other.” He has no illusions that swords will be beaten into ploughshares any time soon. “History is destined to repeat itself as new generations of people are born and divided by religion.”

The unsentimental photos capture the defiant pride of people who have risked everything in the service of their country, something familiar to generations of Canadians.

Adams’ creativity doesn’t stop when he caps his camera. He turned his attention homeward when the Rt. Hon. Adrienne Clarkson, current colonel-in-chief of the Princess Patricia’s Canadian Light Infantry (PPCLI), asked Adams and his songwriting partner, Jim Vallance, for a song to mark the centennial of the regiment’s founding in August 1914, shortly after the First World War began. Based on the Ric-A-Dam-Doo, the PPCLI’s revered colours or flag created in 1914 by Princess Patricia, daughter of Canada’s Governor General, the Duke of Connaught, the song was released in October. The only such flag to accompany troops on the battlefields during that war, the Ric-A-Dam-Doo hangs in the Regimental Museum in Calgary, bloodstained and torn by machine gun bullets.

Adams enlisted women whose husbands are currently serving with the PPCLI in Afghanistan to record The Ric-A-Dam-Doo. “All of them did a great job,” Adams says. “Brittany Hancock and Angela Larson are two of the ladies I chose to sing the lead lines. They were amazing as it took courage to sing in a studio for the first time. I think you’ll agree they did a beautiful thing.”