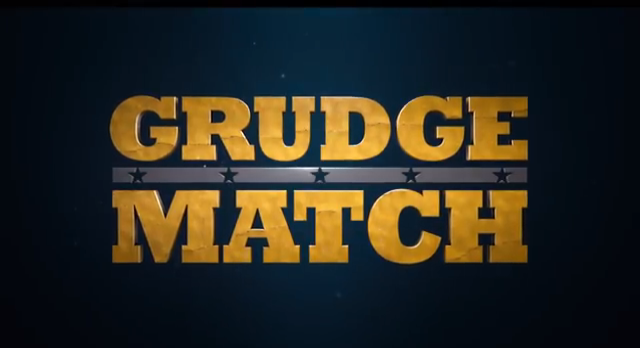 Choice Quote: “Some people look at old rusty scrap and think it’s junk. I see something else.”

The Hype: Rocky squares off against Raging Bull in a boxing match that’s sure to send the denture jokes flying. Stallone is Henry “Razor” Sharp and De Niro is Billy “The Kid” McDonnen — both former boxing champions whose only losses came to each other. Thirty years later, Razor’s broke and supporting his former coach Lighting (Arkin) while Kid’s financially set and living the bachelor life. Cue Dante Jr. (Hart), the son of Razor and Kid’s original promoter, whose deal to get the sworn enemies to participate in a boxing video game results in a real-life rematch. Throw in Sally (Basinger), Razor’s former love, and Kid’s estranged son B.J. (Bernthal), and you’ve got the makings of an intensely personal showdown.

The Reality: It’s sort of like Rocky, but older and without most of the good parts.

This film is basically a backdrop for a series of old age jokes at Stallone and De Niro’s expense, culminating in a neatly wrapped Hollywood ending. Get a load of these zingers: the big rematch is sponsored by Geritol; when the two fighters skydive for publicity, their parachutes are emblazoned with the Bengay logo; Dante Jr. is constantly spouting off “old man” jokes – which wouldn’t get tired so fast if they were any good; Lightning (a joke name in itself considering he’s relegated to a scooter) justifies his constantly belligerent behavior by referencing the “fact” that he’s “800 years old”; and of course there’s the lame gag, “If one of you gets knocked out is it fair to say you’ve fallen and you can’t get up?”

It gets worse when the two fighters show up at a UFC event and mock mixed martial arts as little more than a sissy sport compared to boxing – an especially embarrassing and outdated moment considering MMA’s current real life dominance of boxing in the mainstream sports consciousness.

Sure there are moments when Razor and Kid stick up for themselves with self-empowering monologues, and even literally knock doubters to the mat. But after all the jokes at their expense, not to mention the size difference between Stallone and De Niro, it’s hard to take them, or the film, seriously.

Which, I admit, is too bad, as I do like the concept of the film. Early this year Quartet did a better job of balancing the drama and the comedy in telling the tale of a group of retired opera singers taking back the stage. But it’s different when it’s the senior characters making fun of each other. They set up their own obstacles and then knock them down. When the “old men” are slugging it out for their honour in a bout sponsored by Geritol, it’s clear from the beginning that, no matter who wins, they’re fighting a losing battle.

Can the grandkids watch?: There’s not much in this film for them.