The Top Pop Culture Stories of 2013 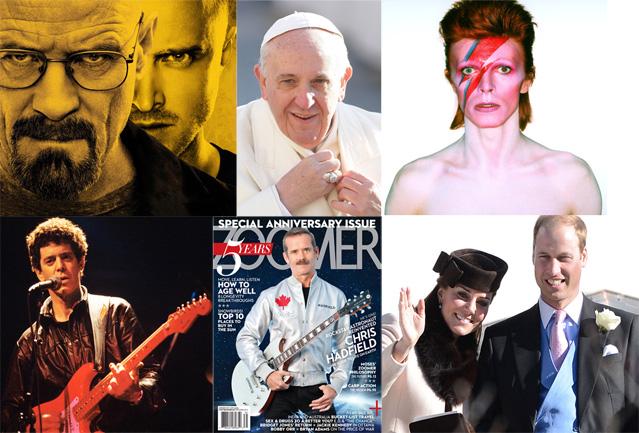 Looking back, 2013 offered up a roller coaster of pop culture news, including peaks (David Bowie’s surprise album, the royal baby), valleys (the celebs we lost), and twists that made your stomach turn (twerking and Rob Ford’s antics to name a few). We’ll spare you the latter when we list, in no particular order, the top pop culture events of the year.

Ben Affleck’s Iranian hostage crisis thriller Argo hit theatres in 2012, but it really picked up steam during the 2013 award season when it earned a slew of honours including Best Picture (Oscars, Golden Globes, and BAFTAs), Best Director (Golden Globes), and Best Adapted Screenplay (Oscars). As well, the film inadvertently, through it’s glaring omissions of facts, helped highlight Canadian diplomat Ken Taylor’s heroic role in the rescuing of six American hostages from Iran in 1979.

Other award season superstars included Daniel Day-Lewis, who collected Best Actor awards like baseball cards for his title performance in Steven Spielberg’s Lincoln, and Jennifer Lawrence, who became Hollywood’s new “It” girl, and (and even got hit on by Jack Nicholson) after winning the Best Actress Oscar and then tripping on her way up to the stage to receive it.

January 8, 2013 was David Bowie’s 66th birthday, but the rest of us received the gift. That’s the day Bowie shockingly announced the release of a brand new album – his first in a decade – called The Next Day. In typical Bowie fashion he did it his way, recording the album completely in secret and then dropping his first single, called “Where Are We Now,” in our laps without warning. Upon the album’s release in March, it topped the British charts and sold nearly 95,000 copies in its first week. Critics quickly hailed the album as a return to classic Bowie form, while fans salivated at the suggestion that another Bowie album could pop up in 2014.

Meanwhile, in May, Canadian astronaut Chris Hadfield serenaded the globe from his post on the International Space Station with a cover of Bowie’s classic “Space Oddity,” while the travelling exhibition David Bowie Is proved a hit at the Art Gallery of Ontario in the fall. To top it all off, voters in a BBC History magazine poll dubbed Bowie the best-dressed Briton in history.

British Kings, Both Past and Future

Queen Elizabeth II enjoyed the majority of the royal press in 2012 as she celebrated her Diamond Jubilee, but 2013 belonged to the future, and past, kings of England.

On July 22, Prince William and wife Kate Middleton welcomed Prince George into the world — a birth that received more attention than any other since a baby boy was born in a manger in Bethlehem 2000 years ago. The prince is third in line to the British throne.

Meanwhile, in February, researchers at England’s Leicester University confirmed that remains found beneath a parking lot did indeed belong to King Richard III, who died at the Battle of Bosworth Field in 1485. The discovery ended five centuries of speculation and many years of parallel parking.

The legend of Leonard Cohen continued to grow as the troubadour took home both Artist of the Year and Songwriter of the Year awards at the 2013 JUNO awards. The Artist of the Year nod evidently signaled the impending apocalypse for a sizable number of Justin Bieber fans, who lost their marbles on social media.

In a similar, though less-amplified instance of outrage, millennials squared off with boomers when boy band One Direction was accused of ripping off The Who’s “Baba O’Reilly” in their song “Best Song Ever.” Ever the diplomat, Pete Townsend helped smooth the whole misunderstanding over.

To the surprise of no one, Breaking Bad’s final season proved one of the biggest television stories of the year. The series finale reportedly attracted 10.3 million viewers – not quite up there with, say M.A.S.H., which garnered more than 105 million viewers, but in this age of thousands of television channels and Internet streaming, the Breaking Bad finale produced more hype than most Hollywood films. Imagine the attention the Mad Men finale will receive when that show kicks the bucket in 2015.

The Rise of the Boomer Flick

A boomer flick, as we call them, is a film featuring actors in their 50s, 60s, and beyond in prominent leading roles that also often examine issues related to aging.

It’s a trend that started to catch steam way back in 2009 with films like It’s Complicated, starring Meryl Streep, Alec Baldwin, and Steve Martin – 60, 51, and 64 at the time respectively – which helped break the oft-employed mold of boomers being relegated to supporting roles, often cracking age jokes or acting “lovably senile.” The following year brought Beginners, starring Christopher Plummer as an octogenarian who comes out and explores homosexual relationships. The role made Plummer, at 82, the oldest actor to ever win an Oscar.

Fast forward a few years and not only are boomer flicks hot commodities, but some prove to be box office gold, such as the 2012 hit Amour, which hit the jackpot during award season with romantic leads that were 82 and 85 years old.

Between wide releases and film festival premieres, 2013 boasted a huge number of boomer flicks from all genres. They include Adore, August: Osage County, The Face of Love, Gerontophilia, Gloria, The Great Beauty, Grudge Match, The Love Punch, Nebraska, Philomena, Quartet, Still Mine, and Unfinished Song to name a few.

Some were silly, some serious, some ground-breaking and others controversial, but one thing is for sure – the proliferation of boomer flicks is on the rise.

The papacy made major headlines throughout 2013, beginning with Pope Benedict XVI’s resignation in February – the first pontiff to resign on his own accord since the 13th century. In March, a humble 76-year-old Argentinian bishop named Jorge Mario Bergoglio was elected to St. Peter’s throne, becoming Pope Francis. The new pope made headlines for what some deemed “radical” behavior, including forgoing the papal palace for the smaller Vatican guest house, washing the feet of prisoners, announcing that atheists can get into Heaven, and suggesting the church is small-minded when it comes to issues like homosexuality, abortion, and contraception.

Quick – name a commander of the International Space Station who isn’t Chris Hadfield! Unless you work for NASA, you probably can’t. That’s why Hadfield – also a former Zoomer cover man – captured so much attention when he became the first Canuck ever to take the helm of the ISS. From intergalactic duets to breathtaking photo tweets to zero-gravity science experiments to chatting with folks back on Earth (including fellow Canadian William Shatner), Hadfield captured the world’s attention and proved just how fun and engaging science can be.

A number of notable Canucks earned awards and tributes this year, starting in February with legendary pianist Glenn Gould snagging his fifth Grammy – this one a Lifetime Achievement Award.

April saw classic rockers RUSH enter the Rock and Roll Hall of Fame, while k.d. Lang earned a heartfelt tribute at the 2013 JUNO awards. However, the biggest surprise of all came in June when Joni Mitchell thrilled with a rare performance as part of the Luminato Festival in Toronto ahead of her 70th birthday.

Then, in September, Canadian hero Terry Fox, who arguably should have been the first inductee on Canada’s Walk of Fame, finally received the overdue honour alongside fellow Canucks Alan Thicke, Oscar Peterson, and others.

It’s as if an earthquake hit the late night landscape in 2013, and when the tremors stopped all the pieces fell into place.

The biggest late night news of the year came in April, when NBC announced that Jay Leno would be retiring (*ahem*) from The Tonight Show and that Late Night host Jimmy Fallon would take over in early 2014. Veteran Saturday Night Live star/writer Seth Meyers is pegged to take over Fallon’s former gig.

Over on CBS, late night’s longest reigning host, David Letterman, celebrated 20 years on The Late Show by signing a two year extension that will see him anchor the 11:35 time slot through 2015.

Speaking of the 11:35 time slot, ABC promoted Jimmy Kimmel Live! To the coveted position in January, bumping Nightline and establishing a long sought after credible late night opposition to both NBC and CBS.

As it happens every year, we lost a number of beloved personalities in 2013. They include: