Biggest News Stories for Boomers in 2013 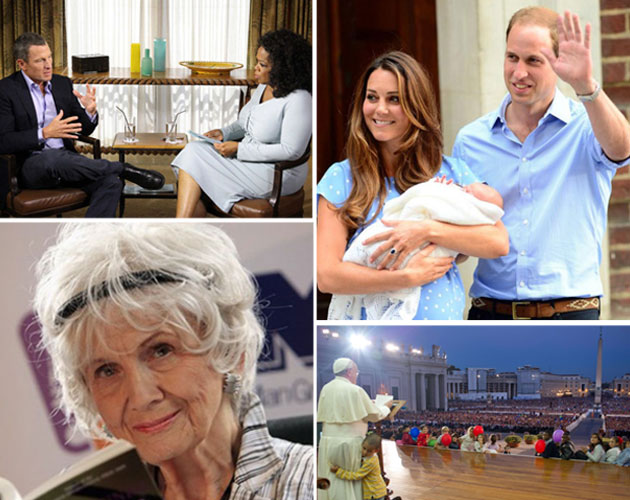 As we enter the new normal of 2014 and Toronto traffic becomes gridlocked once again, let’s review one last time some events and transitions of 2013 that mattered to boomers.

Jan.
* Lance Armstrong, 42, admits to doping in all seven of his Tour de France victories
*John Kerry, 69, becomes U.S. Secretary of State, succeeding Hillary Clinton, 65.
Queen Beatrix, 75, announces that, after more than thirty years as Queen, she will
abdicate the Dutch throne at the end of April in favour of her son, Prince Willem-Alexander.

Cardinal Jorge Bergoglio of Argentina, 76, is the first non-European elected Pope and the first pontiff from the Americas.

April
* Justin Trudeau, 41, is the new leader of the Liberal Party, winning with an overwhelming majority on the first ballot. becoming the first post-Boomer to lead the party and become front runner for Prime Minister.

* In what has become known as the Marathon Bombing, two pressure cooker bombs explode near the finish line of the Boston Marathon, killing 3 people and injuring an estimated 264 others, many of whom lost limbs.

April
* Winnipeg-born movie star Deanna Durbin dies, age 91, in a French village near Paris where she lived with her husband of 50 years. She made her last film at the age of 27 and then opted out. “Winnipeg’s Sweetheart”  granted only one interview since 1949; that was in 1983.

May
*The Senate scandal gathers speed as it’s confirmed that Mike Duffy, 66, received a check for $90,172 from PMO legal advisor Nigel Wright to cover amount Duffy wrongly claimed as residence expenses. Wright resigns, then Duffy resigns from the Conservative caucus, remaining as an independent.
*Another scandal begins to erupt as both Gawker and the Toronto Star claim to have seen a video of Toronto Mayor Rob Ford smoking crack cocaine.

June
* Total cost of flooding this month in southern Alberta is estimated at more than $5 billion.
* James Gandolfini dies, age 51, in Rome and is mourned by the masses who fell in love with him on The Sopranos.

July
* The Duchess of Cambridge gives birth to the third in line to the throne, Prince George. His father shows he’s handy with a car seat.

*In Florida, George Zimmerman is found not guilty of second-degree murder and manslaughter for killing 17-year-old Trayvon Martin.

Aug
* Dutch scientists serve up the first-ever hamburger to come from a lab. It’s neither flesh nor fauna nor Yves.
* Those who didn’t already know find out what twerking is and that the proper preposition that follows the verb is “on.” As in, Miley Cyrus twerked on Robin Thicke at the Video Music Awards on MTV.

Sept.
* The UN confirms that the nerve gas sarin was used in Syria and calls it a “despicable war crime.”

Nov.
* The Senate votes to suspend Mike Duffy, Pamela Wallin and Patrick Brazeau without pay and most benefits.
* “Yes, I have smoked crack cocaine,” Toronto Mayor Rob Ford admits in a statement, dividing the city into those who are scandalized or smug (the Toronto Star) and those who don’t care, and making Toronto more notorious, for the moment, than Caracas and Detroit combined.

Dec.
* Death of Nelson Mandela, 95, and celebration of his Life
* First G-8 Summit on Dementia in London commits nations to a war on Alzheimer’s similar to the war on AIDS.