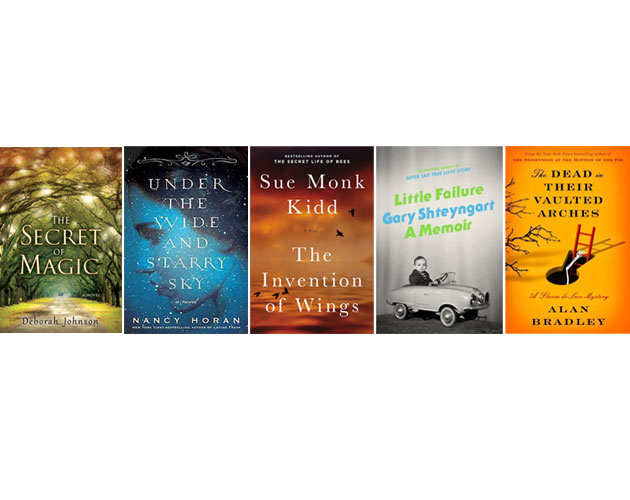 Between the post-holiday exhaustion, dumps of snow and the polar vortex, hibernating with some good reads sounds like a fine plan. From memoirs, to historical fiction, to murder mysteries, there are plenty of options for escape, even if it’s only for the length of the book.

After three acclaimed novels, including the dystopian Super Sad True Love Story, American writer Gary Shteyngart (a Giller judge in 2012 now making news in the CanLit world for his contentious comments about Canadian writers — which he says he made in a drunken stupour) gives readers an inventive, provocative, and often hilarious account of his life so far, sharing his experiences as a young Russian immigrant trying to adapt to life in America.

The Invention of Wings by Sue Monk Kidd

Book clubs will rejoice at this latest book from the author of The Secret Life of Bees, which spent more than 175 weeks at the top of the New York Times bestseller list. Partly inspired by the true-life figure of Sarah Grimke, one of the early pioneers in the abolition and women’s rights movements, Kidd weaves fact and fiction in The Invention of Wings to deliver the riveting drama of human history.

Under the Wide and Starry Sky by Nancy Horan

Nancy Horan’s debut novel Loving Frank about the love affair between Frank Lloyd Wright and Mameh Cheney is credited with launching a new genre of historical fiction —  the woman-behind-the-famous-man. Her new book, Under the Wide and Starry Sky, follows the life of nineteenth-century Scottish writer Robert Louis Stevenson and his American wife, Fanny, exploring the highs and lows of their passionate relationship.

The Dead in Their Vaulted Arches by Alan Bradley

The sixth installment in the Flavia de Luce series, set in post-World War II England, finds the young sleuth putting her skills to the test after the discovery of a reel of film in the attic of the crumbling de Luce estate. The charming, yet dark, series is set to be made into a BBC miniseries by Sam Mendes.

The Secret of Magic by Deborah Johnson

Inspired by four people, including Johnson’s own grandfather, an African-American who fought in the U.S Army during World War II but was still denied the right to vote, Johnson’s new novel aims to challenge conventional wisdom about race relations in the South as it explores the best and worst of history.