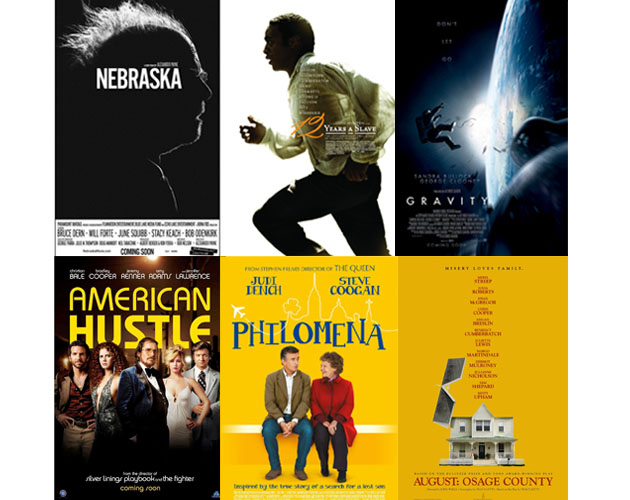 And the winners are… In case you missed the 2014 Golden Globes, EverythingZoomer.com’s Mike Crisolago (@MikeCrisolago) posted all of the big news from the show right here

And there you have it. Thanks for joining us, and don’t forget to tell us what you thought of the show on this website, on Twitter (@Zoomer), or on Facebook (www.facebook.com/everythingzoomer).

Thank goodness 12 Years a Slave won! I feared living a world where Amy Adams went home with a Golden Globe and this brilliant film didn’t.

I’ve come to the conclusion I’m bad luck. If I’m pulling for you to win you’re sure to lose, unless, apparently, you’re a foreign film.

Well, whoever robbed Meryl Streep of her best actress award is back at it — they just robbed Chiwetel Ejiofor of Best Actor in a Motion Picture Drama. WINNER: Comfortably Drunk Matthew McConaughey, Dallas Buyers Club

10:45: See what happens when you cut Leo off with music during his award speech? He comes out and continues the speech when he’s supposed to introduce the next set of nominees. Don’t mess with Leo.

Take comfort from the fact that, even though you have to sit through commercials for Robocop and I, Frankenstein during the breaks, you won’t hear either of them mentioned during next year’s Golden Globes ceremony.

And to no one’s surprise, WINNER: American Hustle

10:37: Drew Barrymore out to award Best Motion Picture, Musical or Comedy. Not looking good for Nebraska…

If you’re keeping track, we’re two-and-a-half hours in and Tina and Amy have only been on stage about four minutes. What’s worse: having a bad award show host, or two great hosts that are barely allowed to do anything?

No way — they’re playing Leo off the stage with music as he thanks his parents for supporting his career? That’s cold.

They just aired a commercial for I, Frankenstein. “You’re only a monster if you behave like one.” No, I’m pretty sure if you’re made up of sewn together, electrified, dead body parts, you’re a monster.

10:17: Ben Affleck, or future Batman, out to present award for Best Director – Motion Picture. In the least shocking win of the night theWINNER: Alfonso Cuaron, Gravity

10:15: Every time they come back from commercial the audience is talking really loud as the next presenter is trying to talk. It’d be great if the presenter just stood there waiting with a judgemental look on their face, like your elementary school teachers used to do when the class wasn’t paying attention.

Keaton sings a song about being Woody’s friend forever. Judging by the Twitter response, it’s either the sweetest tribute or the creepiest, horror movie-esque song you’ll ever hear at an awards show.

“Woody’s women can’t be compartmentalized…They are in fact the hallmark of Woody’s work.”

10:05: Video montage celebrating Woody Allen. Diane Keaton out to pay tribute to the legend being honoured with the Cecil B. DeMille Award.

So torn with that last category. I’m a huge fan of Amy Poehler, Julia Louis-Dreyfus, Edie Falco, and Zooey Deschanel. Throw Lena Dunham in and it’s one of the most talented group of nominees in any category.

Up next, the award for Best Actress in a TV Comedy. WINNER: Amy Poehler, Parks and Recreation, who celebrates by making out with Bono.

And here’s Colin Farrell looking dapper, talking up the film that seemingly everyone but me loves to gush over, Inside Llewyn Davis.

9:52: Chris Pine and Emma Watson out to announce Best Animated Feature Film. They literally had no lines except to say that.

“The bravest, most talented actor I ever worked with. The only reason you’re not here is because I had more sequins.” — Michael Douglas to Matt Damon

WINNER: Michael Douglas, Behind the Candelabra

Jimmy Fallon and Melissa McCarthy out to present Best Actor in a Mini-Series or TV Movie. Wacky comedy about McCarthy thinking she’s Matt Damon. Hope Fallon has better material when he takes over The Tonight Show in a month.

If you haven’t seen The Great Beauty, go out and watch it. Trust me.

At least his acceptance speech was funny. Has Jim Parsons been toppled as king of TV comedy?

Samberg’s as shocked as the rest of us that he won.

9:28: Emma Thompson, martini and high heels in hands, takes the stage to announce winner of Best Screenplay. How amazing is she?

This show is moving at a decent pace, but it’s suffering from a serious lack of Tina and Amy. Where were they for the half hour before the Mr. Golden Globes sketch? Probably visiting with the TV nominees. Takes about 30 minutes to get all the way to the back where they’re sitting.

Jim Carey is out to talk up American Hustle.

9:17: The award for Best Actress in a TV Series, Drama. WINNER: Robin Wright, House of Cards

We’ve got Kyra Sedgwick and Kevin Bacon intro ducting their daughter, Miss Golden Globe. Tina comes out and introduces her son, “Mr. Golden Globes,” Randy (Amy dressed as a little boy). Randy goes searching for her dad in the audience. Now on to nominations. Thanks for coming out, Kevin Bacon’s daughter.

I hope Tina and Amy get out here fast and help take this bad taste out of my mouth.

9:07: Robert Downey Jr. to present award for Best Actress In A Motion Picture, Musical or Comedy. If it’s not Meryl it’s a robbery…

Olivia Wilde out to talk up Best Film nominee Her.

@angelapapp on Twitter wants to know what’s the deal with the seating plan. It’s true — movie stars in front, TV folk in back. I think they sat Vince Gilligan and the Breaking Bad cast in the lobby. Just sent an usher out to tell them they’d won. Audience members on The Price is Right get better seats.

“A man who refused to hate — not because he didn’t have rage or anger, but because he thought love would do a better job.” — Bono on Nelson Mandela

Now the award for Best Original Song — Motion Picture. WINNER: “Ordinary Love” by U2, from Mandela: Long Walk to Freedom

Turns out Ebert knows P. Diddy from partying with him on a boat in St. Bart’s. Ah, the humble life.

8:48: Steve Coogan out with the real Philomena Lee, who is played by Dame Judi Dench in Philomena, to highlight the film, nominated for Best Picture

The entire cast flanks creator Vince Gilligan on stage. Aaron Paul caps it with: “Yeah b*tch!” It’s what Walter White would have wanted.

Aaron Eckhart and Paula Patton out to present Best Actor in a TV Series, Drama. Can Bryan Cranston win in his last year nominated for Breaking Bad? ….

8:35: Teleprompter malfunction as Jonah Hill and Margot Robbie are out to talk up their own film The Wolf of Wall Street. They have to read the script off a piece of paper. There’s some irony in there somewhere.

8:33: Tina and Amy introduce the president of the Hollywood Foreign Press for a speech. He jokes that folks at home use this time as a bathroom break. He literally took the words out of my mouth.

8:29: Matt Damon out to pay tribute to Best Picture nominee Captain Phillips. Good film, but not a chance it wins tonight.

Moss shaking as she accepts. The only person not shaking as they accepted was the Behind the Candelabra guy with the glass of vodka. Take note, nominees.

Aaaand we’re straight into the award for Best Actress in a Mini-Series or TV Movie. WINNER: Elisabeth Moss, Top of the Lake

She thanks all of those who’ve helped her, then, “To the people who’ve given me sh*t, go to hell and never come back.” Not every speech can be “You like me, you really like me.”

Bisset choked up, emotional when discussing how 47 years ago she was described as a promising newcomer. Taking her a little while to find the words. She’s talked through TWO musical play off cues. She’s waited this long, I guess she’s earned it.

8:13: Channing Tatum and Mila Kunis out to present Best Supporting Actress in a Series, Mini-Series or TV Movie. WINNER: Jacqueline Bisset, Dancing On the Edge

“Gravity: the story of how George Clooney would rather float away into space and die then spend one more minute with a woman his own age.”

“Jonah Hill used prosthetic genitals in The Wolf of Wall Street, so you have that to look forward to the next time you eat at Planet Hollywood.”

8:05: “I assume the award is for finest man with the biggest glasses.” — Amy Poehler on this year’s Cecil B. DeMille Award winner Woody Allen, and previous winner Martin Scorsese.

8:00: Hosts Tina Fey and Amy Poehler out to kick off the show. We’re 30 seconds in and no boob songs — already better than Seth MacFarlane at the Oscars.

7:55: Welcome to our Golden Globes live blog! EverythingZoomer.com’s Mike Crisolago (@MikeCrisolago) will be posting all of the big news from the show right here, so don’t forget to join the conversation on this website, on Twitter (@Zoomer), or on Facebook (www.facebook.com/everythingzoomer). We’ll be sharing our favourite reader observations about the show!