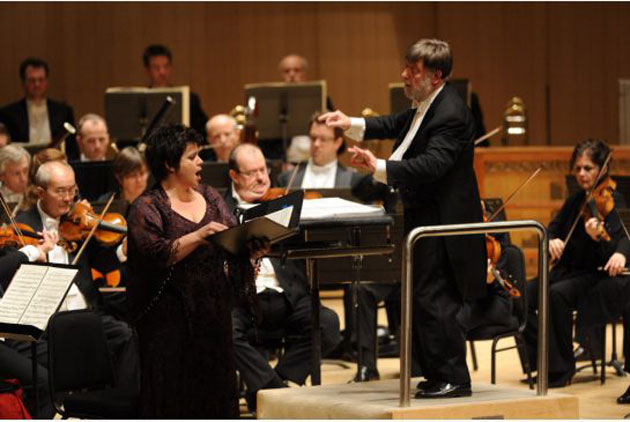 Conductor laureate Sir Andrew Davis will celebrate 40 years on the podium when he appears with the TSO.

The future for classical music couldn’t be brighter if this week’s lively – and occasionally laugh out loud funny — presentation of the Toronto Symphony Orchestra’s 2014/2015 season is anything to go by.

What’s so funny about symphony music?

When it’s a concert featuring The Second City Guide to the Symphony, with the comedy troupe on stage with the maestro and the musicians in November, expect an evening of comic musical mayhem.

A video of a mock planning session for the program delighted the subscribers, volunteers and media folks in the audience at the season announcement at Roy Thomson Hall Thursday morning.

“I love humor and these guys were insane,” Oundjian told Zoomer later, about making the video. “It was getting more and more crazy and inappropriate.”

He credited his willingness to be appropriate and silly, something very un-maestro-like, to being the first cousin of Monty Python’s Eric Idle.

For the first time, the new season starts in August when the TSO plays a summer concert as a prelude to its European tour of summer festivals. It’s the orchestra first overseas tour since 2000.

A celebration of the piano is the theme of the season, highlighted by a two-week Piano Extravaganza next February.

Make that an Axtravaganza. The keyboard festival is curated by and features Emanuel Ax, along with a roster of Canadian and international pianists.

“We’ll have pianists from all over Canada, from all generations,” said TSO music director Peter Oundjian, “including people in the community who play the piano.”

The effort to make the symphony inclusive instead of exclusive is a necessity, said the maestro, just weeks after the TSO declared a deficit of $1.2 million for it’s 2012-13 season, with ticket revenue dropping to $8.3 million from $9.8 million.

“We have to be relevant to the broadest number of people as possible,” he emphasized.”How can we justify asking people to support us if we’re only relevant to people who love Bruckner?”

He explained, “The function of the orchestra will be more and more doing different kinds of things in the community.”

He includes picking up the slack in schools where fewer and fewer kids are exposed to art music, even though he thinks it’s great that they get to study Chuck Berry and the Beatles in music class.

Twice during his presentation, Oundjian referred to YouTube. Asked whether it was a good or bad thing for classical music, he replied, “People panicked when radio started broadcasting concerts.

They said people would no longer come to hear live music. It’s the same with the internet. Nothing will replace the live experience. Look at the Leafs. Do they consider taking the games off TV so people will buy tickets? The more they have a presence on TV, the more people are interested and curious about them. I think we need to be on the internet as much as possible.”

Oundjian is a cheerleader not just for the TSO but for orchestras across Canada.

“How terrible for cities like Winnipeg, Calgary, Edmonton if their orchestras — all very good orchestras – were no longer funded and couldn’t support musicians who need to make some kind of a living. I am not embarrassed to say this needs to be funded. It’s very important for the community and I don’t care if 80 per cent of people aren’t interested. They need corporate funding and they have to be enticing enough so people will come to the concert hall and find this significant experience.”

As for his own orchestra, as he enters his second decade as music director, he says, “Wouldn’t it be great if the TSO had the reputation of the Berlin Philharmonic? And here’s what it would take.