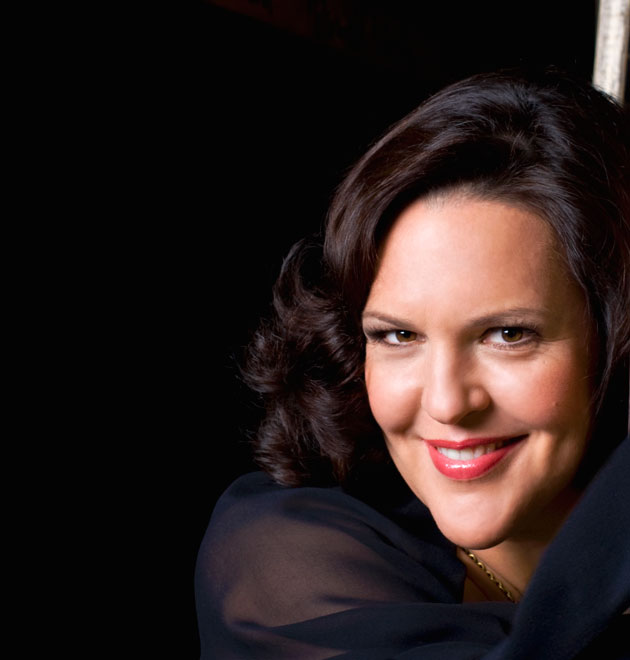 “I can’t believe I’m 50!” says Adrianne Pieczonka, the celebrated Toronto-based soprano who takes on the role of Amelia for the first time in Verdi’s A Masked Ball.

RELATED: CURTAIN UP AND A COUP: THE CANADIAN OPERA COMPANY ANNOUNCES A NEW SEASON

“Do I give in to my age?” she muses aloud. “Or do I eventually take on things that are more comfortable and less challenging — that’s the big question.”

It’s a question that faces all boomers. But for a world famous opera singer, it’s also a choice that is public, risky and terribly poignant. Just as she achieves the full ripeness of musicality and greatest depth as a performer, the physical loss that comes with aging looms not so far ahead.

The Canadian diva — a description she’s perfectly happy with, thank you very much –answers her own questions. “When I’m in good form, then I think I can do this for another ten years. But we do age and something’s gotta give.”

Pieczonka is talking about the challenge of bel canto roles, like Amelia.

“There’s nowhere to hide in singing this stuff,” she explains, sitting in the quietly elegant living room of the Annex home she shares with her wife, Laura Tucker, and their 8-year old daughter.

“The voice is exposed,” she says, “and you’re talking about two little tiny muscles, the vocal cords. You are truly a vocal athlete. It’s a physical thing and a limited thing. You’re either robust and healthy and supple — or you can’t maintain it and you struggle with the huge effort and crash.”

It’s losing the high notes that can often signal the waning of a soprano’s career. And the “high C” that Pieczonka will reach for at every performance of A Masked Ball is daunting.
(She also finds it “daunting” to perform the role “in my pyjamas for most of the night,” she says, about the non-traditional production set in the middle of the 20th century.)

Raised in Burlington, Pieczonka trained in Europe and spent years in Vienna and London before returning to Canada.

“Vienna started me on the dramatic Germanic repertoire  path,” she explains about her focus on Strauss and Wagner roles.”But I want to keep a handful of Italian roles in my repertoire because it’s a nice vocal change and  keeps my voice supple.” She says she always had her eye on Aida. “But I realized that vocally it is not a perfect fit. It’s too high.”

Even though her role in Masked Ball calls for that high C, she says, “the build-up is easier than in Aida. With Aida, you’re more exposed, really hung out to dry.”

The role for which she’s recently becoming most famous is Chrysothemis in Strauss’s Elektra. Following performances at London’s Royal Opera House, she’ll reprise the role at La Scala in spring and then spend the summer in Munich.

But for all the attraction, accolades and opportunity in Europe, she says, even with Vienna in her blood, Toronto is where she and her family belong.

“Vienna and Munich and London are cities I know and love,” she says. “But being married to a woman, I made the choice to come back and raise our daughter here. It is difficult being based here, with 80 per cent of my work in Europe, but we are in Canada for our daughter, to raise her in a country that is tolerant.”

Toronto, she says affectionately, “is too cool. It kind of freaks me out. I can’t keep up.”

She credits COC director Alexander Neef with making the opera cool. “He does a super job targeting the young hip nation, getting under 30s to come, with performances by Rufus Wainwright and Arcade Fire.”

Pieczonka heartily approves of musical eclecticism and she definitely does keep up with what’s cool. She said she’d happily combine her high C’s in duets with pop and rock singers she admires and lists a few: K.D. Lang, Neil Young, Joni Mitchell, Tegan and Sara.

“I love all genres,” she says. “Jazz, folk, country, heavy metal not so much.”