The Way Back to Thursday: Gays, Grandmas, and Alzheimer’s 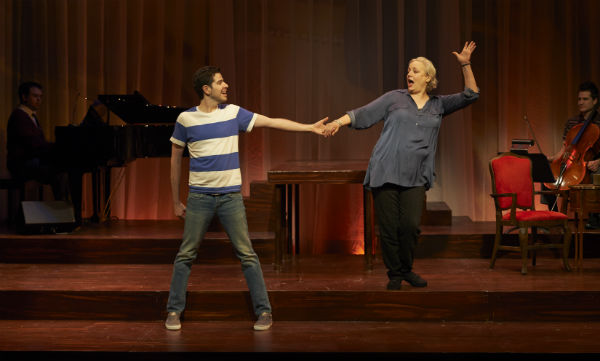 We need one more local production before this can be appointed a trend status, but it seems as though Alzheimer stories are now making their way onto the stage in this town.

Last year, Jay Teitel brought us Alzheimer That Ends Heimer at Toronto’s Factory Theatre, and now in Theatre Passe Muraille’s The Way Back to Thursday, Rob Kempson weaves a poignant look at the effects of the disease into a coming out story — and all in musical format no less.

The 90-minute stage production employs the traditional song cycle structure with the characters each singing in turn to the audience as opposed to each other. And it features pianist and music director Scott Christian and cellist Samuel Bisson on stage providing musical accompaniment.

The majority of the story is told through flashback and centres on the relationship between Cameron (played by Kempson), a young gay man who comes out of the closet, moves to Vancouver and becomes a filmmaker, and his relationship with his beloved grandmother (played by Ingrid Van Wieren) with whom he developed his passion for the silver screen.

It’s during those Thursday evenings they spend together watching stars from the golden age of cinema that we learn that grandma has led her own colourful life, leaving her husband after decades of marriage without remorse, instead grateful that she can now be free and drink gin with abandonment. And we’re also treated to the ultimate girl power song, Septuagenarianista:

Your mother said that I was just two darn old
She said I couldn’t handle getting a cold
I said “Katherine dear, I’m old but not dead”
I’m a septuagenarian-ista!

But, as life goes on the characters grow both physically and emotionally apart. Cameron becomes preoccupied with film school and his blossoming romance, while grandma is left back home to make long distance calls in hopes of holding on to the connection she once had with her grandson.

And then, seemingly in a flash but in truth slowly over time, she reaches elder age and begins losing her once lighting sharp mind to Alzheimer’s disease. It’s at this moment we see her reality intermingle with fantasy, and where Van Wieren puts her powerful voice to great use in the song Moving in Reverse:

It’s a moving number, and highlights possibly the best part of the production–Kempson’s talents as a lyricist. Because somewhere between those catchy pop-influenced songs, he’s managed to bring light to what is often a very dark subject.

The Way Back to Thursday runs until February 8, 2014. Visit Theatre Passe Muraille‘s website for more info.