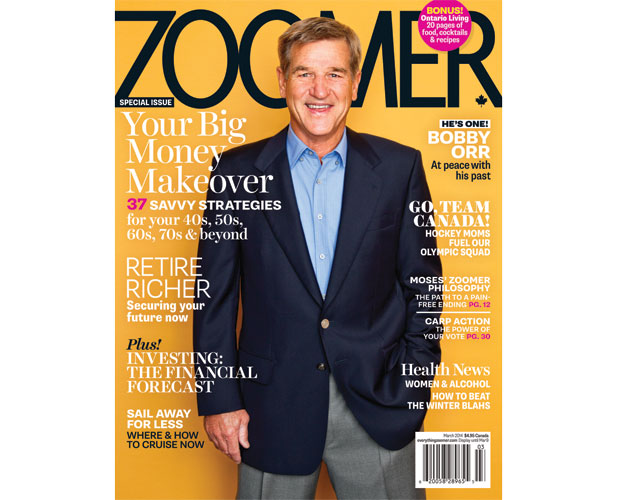 The great No. 4 graces the cover of Zoomer magazine’s March issue. Here, Peter Muggeridge tells us what it was like meeting the legendary hockey player.

We were lucky to get the chance to interview Bobby Orr twice for the cover story “The Defenceman Rests” in the March 2014 issue of Zoomer magazine – once in our Toronto offices and again in his hometown of Parry Sound, Ont.

Perhaps the greatest player ever, Orr was promoting his long-awaited autobiography – Orr: My Story. He was as challenging to interview as he must have been to stop on the ice. While he was his usual down-to-earth, modest, funny and cheerful self – and more than happy to partake in what must have been his millionth interview – he was also reluctant to speak about his own incredible accomplishments or delve too deeply into his personal setbacks (especially his relationship with Alan Eagleson) off the ice.

When he came to the ZoomerPlex for the first photo shoot, the place had the feel of a royal visit. Most of the 40-something office guys who remembered Orr’s playing days made any excuse to drop by the studio to catch a glimpse of the great No. 4. The former Bruins star took it all in good humour, shaking hands, posing for pictures, kibitzing with the photographer and bragging about how crisply pressed his shirt was: “I even ironed it myself,” he exclaimed, to loud cheers.

Orr also drew many a puzzled stare as he buzzed around the place, constantly repeating the word “Zoomah.”  Just another hockey player who’d taken one too many headshots? “Nah,” laughed Orr. “That’s how they’d pronounce your magazine in Boston – Zoomah.”