Shirley Temple: Her Sparkle Lives On 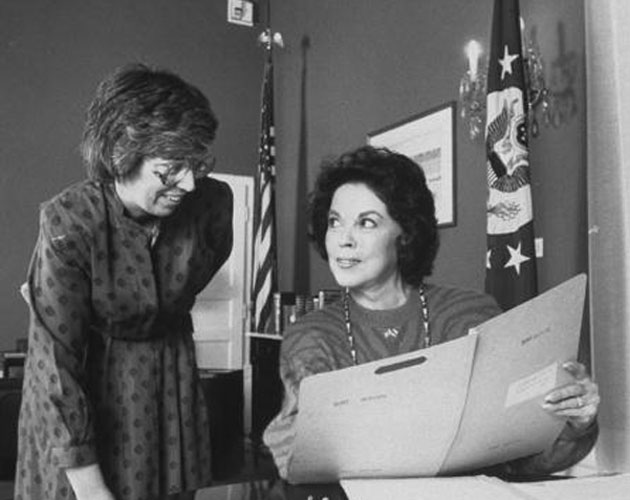 That’s because, despite hard evidence to the contrary, we thought she was never anything but an adorable, curly-topped moppet.

Eventually, we had to accept that there were two Shirley Temples, tangentially related but nevertheless distinct.

The grown-up diplomat, fundraiser and ambassador was someone we could admire and respect — a child star who beat the odds and became a fulfilled, praiseworthy adult.

Looking back from this current era of drug-addled movie stars, Hollywood heroin culture and actors’ fractured personal lives, the grown-up Shirley Temple is remarkable for the life she led.
For two decades — from 1969 when she became a member of the U.S. delegation to the United Nations to 1989 when she was the U.S. ambassador to Czechoslovakia during the fall of Communism — she transferred her talent and charm from the sound stage to the world stage.

She was also the president of the Multiple Sclerosis Society and, after being a model of cuteness for every little girl born in the 1930s and ‘40s, she became a model for women with breast cancer in 1972 when she invited reporters into her hospital room for a press conference while recovering from a mastectomy. She encouraged women to get their breasts checked and told them not to “sit home and be afraid.”

RELATED POST: Why Shirley Temple Is The Last Class Act

“She is widely credited with helping to make it acceptable to talk about breast cancer,” observed the New York Times in her front page obituary.

As with her career, her personal life also made the transition from kiddie screen idol to contented wife, mother, grandmother and great-grandmother.

Shirley Temple married her second husband, Charles Black in 1950 and remained married to him for almost 55 years, until his death nine years ago.

According to the New York Times, he told a reporter in 1988, “Over 38 years I have participated in her life 24 hours a day through thick and thin, traumatic situations, exultant situations, and I feel she has only one personality. She would be catastrophic for the psychiatric profession. You can wake her up in the middle of the night and she has the same personality everybody knows. What everybody has seen for 60 years is the bedrock.”

For those who lived through the Depression, Shirley Temple was the sunshine illuminating the gloom. Post-war, she inspired mothers to enroll their daughters in dancing class and to take inordinate pride in any child with ringlets.

(Pity those of us born in the ‘40s with straight hair!)

Her mother Gertrude was also an inspiration, demonstrating that you could be a loving mother and a successful stage mother simultaneously.

(My own mother like to remind me, whenever I had to do something in public or try out for something, that Shirley Temple’s mother always told her, before a big scene, “Sparkle, Shirley, Sparkle.”)

Shirley Temple dolls were so coveted they became the best-selling doll in the decade of the ‘30s.

Shirley Temple cocktails are still on menus for kids — a non-alcoholic concoction of soda, grenadine and maraschino cherry.

So let’s raise a Shirley Temple to the lives she lived and the sparkle she brought to so many lives.

We thought she would live forever. And she will, on film, as an adorable, curly-topped moppet to delight and entertain us.