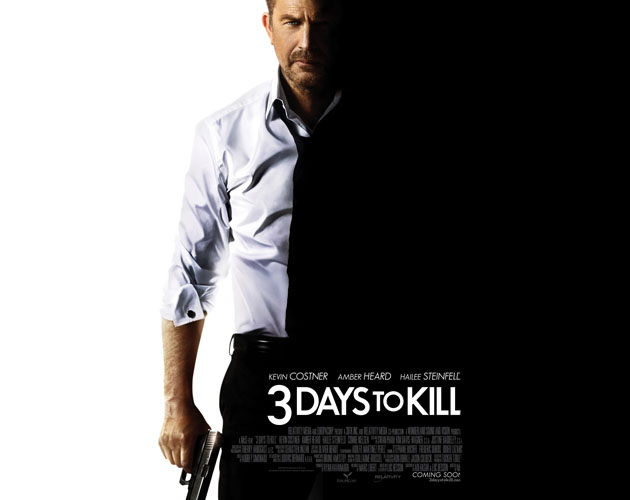 Choice Quote:  “You’ve got three days to kill!” (I’m not being sarcastic — it’s a real quote)

The Hype: Ethan Renner (Costner) retires from the CIA after learning he has terminal brain cancer. Determined to spend his remaining months reconnecting with his ex-wife Christine (Nielsen) and estranged teenage daughter Zoey (Steinfeld), Renner is lured into one final CIA job by mysterious fellow agent Vivi (Heard), who happens to also possess an experimental drug that could save his life.

The Reality: I have to admit – going in I wasn’t expecting much from this film. And while there are weaknesses, and at some points the film gets downright cheesy (the journalists in the press screening all let out a good laugh when Renner carries his daughter to safety in a scene that comes off as a parody of Costner’a hit The Bodyguard), by the end 3 Days to Kill proved a fun, well-paced flick.

A slimmed down, grizzly-voiced Coster, 59, is completely believable as an aging, but still tough as nails, CIA agent trying to set things right with his family before he dies. He’s got a quiet rage to him – the sort of character who’ll ask you to do something nicely once, and smash your head into the wall if he has to ask twice.

But the smartest move director McG (Charlie’s Angels, Terminator Salvation) makes is to ensure the film doesn’t take itself too seriously. The plot is pretty basic – Renner has to kill the bad guy known as The Wolf, but not before he goes through a number of his henchmen first.

The weight of the fact that the hero is dying of cancer and just wants to makes things right with his family is balanced by the lighthearted comedy from Costner when his job as a hired killer is repeatedly interrupted by a teenage girl who barely likes him. Speaking of which, Steinfeld has a good chemistry with Costner and does a fine job as the rebellious Zoey. Heard, on the other hand, is pretty paint by numbers in her “mysterious secret agent” role. And does her character have a crush on Costner’s character? And why is she snooping around his house when he’s hanging out with his family? I guess some questions will have to remain unanswered.

As the film is set in Paris, the scenery is stunning, even if there are a few too many gratuitous Eiffel Tower shots. Car chase lovers will get their fix, as will those who enjoy a good car bomb or shoot out. The soundtrack is quite good, and the director doesn’t feel the need to wrap everything up in a perfect little package at the end.

For what it is, 3 Days to Kill was a nice surprise. Costner proves he can still kick butt, and director McG proves you don’t have to resort to every action flick stereotype to make a fun, shoot ‘em up cop film.

Can the kids/grandkids watch?: It’s not bad for teens.