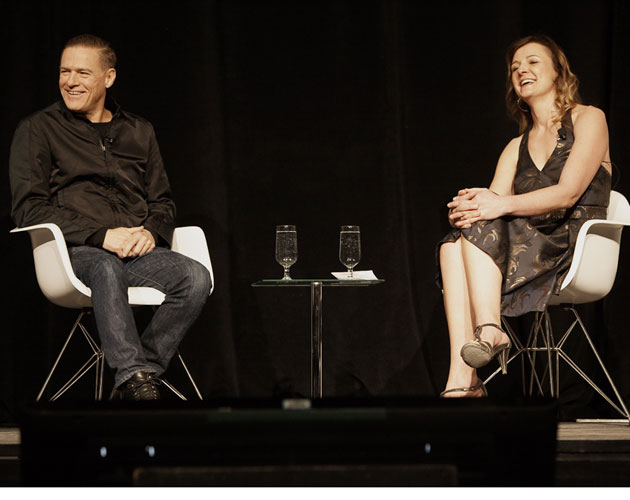 On Feb. 22, 2014, the Glenbow Museum hosted its third annual fundraiser Schmancy. Presented by Enbridge, this event is one of the highlights of the Calgary winter social calendar. What started out as a sit-down dinner at a venue outside the Glenbow has morphed into one of the top Power Parties in Canada, as named by Maclean’s magazine. Held over three floors of the museum, the evening featured a variety of activities including a silent auction, live performances, food and wine and dancing till dawn. “It was time to refresh the event,” explains Allison Ainsley, manager of special events and museum rentals for the Glenbow Museum. “We wanted more people to experience art and culture more often and, therefore, it was essential to bring the fundraiser back to the building. For most people, the last time they had visited the space was when their kids were young.” But it was the feature presenter – musician and photographer Bryan Adams – that was the main draw of this sold-out benefit.

The weather outside the museum was unseasonably cold. However, the atmosphere inside the Glenbow was positively charged in anticipation of Adams. An eclectic crowd, which included Alberta Premier Alison Redford, Zoomer editor-in-chief Suzanne Boyd, model Heather Marks and artist Mark Mullin, were treated to a Q&A-style presentation with Adams followed by an advance viewing of his latest exhibition, Exposed, a series of photographs curated specifically for the Glenbow and never before seen in Canada. The exhibition showcased a selection of portraits of his friends and colleagues in the fashion, art and entertainment industries, notables such as Ben Kingsley, Amy Winehouse and Mick Jagger. A second series of images included brutally honest portraits of young British soldiers who had suffered horrendous war-inflicted injuries.

After a sit-down interview with Adams, where he discussed the pieces in the collection as well as his ability to connect with his subjects, more than 900 party-goers were free to roam the three floors of the Glenbow, each one inspired by a different theme. “Every floor has specific food and entertainment that was curated to highlight their respective collections,” explains Ainsley. “For example, the Mavericks Gallery on the third floor pays homage to the people, like ranchers and oilmen, who shaped the Prairies. Therefore, it made sense to have the Cowtown Opera Company singing a repertoire of opera classics.” Even the caterer, Hotel Arts, got into the Western spirit with a menu that featured beef sliders and lamb chops. A Scotch tasting hosted by Lee Hanson, owner and operator of Barrel Hunter, a boutique importer of wines and spirits, rounded out the floor’s tribute to the Wild West. On the second floor, guests were treated to Worn to Be Wild, an exhibition that traced the history of the iconic leather jacket, while the fourth floor was transformed into the always popular Club Pivot, with local DJ Rob Faust spinning the tunes. And throughout the night, guests had the opportunity to bid on a variety of silent auction items and raffle prizes, such as Business Bear, a glass sculpture donated by local talents the Bee Kingdom, and Epicentre Series: In Time, an acrylic aluminum piece done by artist and designer Kirk Dunkley. Raffle prize packages featured everything from a trip to New York City to a Polar Bear Safari in Churchill, Man. As in previous years, Schmancy was a huge success, bringing the museum to life.  “For one night, it changes the hushed tones of the space to an electrical vibe,” says Ainsley. Note to self for next year though: with three floors of fun, food, and entertainment, comfortable shoes are a must.